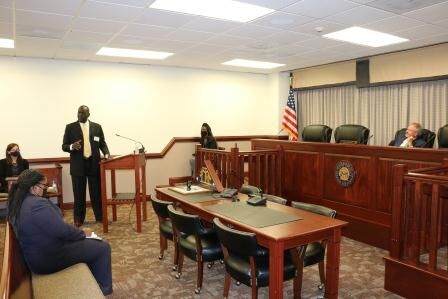 Christopher Sheffield addresses the Georgia State Board of Pardons and Paroles. Board Chairman Terry Barnard (seated at right) listens to Sheffield's presentation. 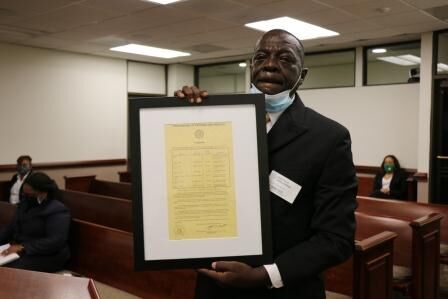 Christopher Sheffield displays the document granting a pardon by the Georgia State Pardons and Paroles Board.

Christopher Sheffield addresses the Georgia State Board of Pardons and Paroles. Board Chairman Terry Barnard (seated at right) listens to Sheffield's presentation.

Christopher Sheffield displays the document granting a pardon by the Georgia State Pardons and Paroles Board.

ATLANTA — The Georgia State Board of Pardons and Paroles pardoned a Cairo native whose professional football career ended because of drugs.

Sheffield graduated from Cairo High School in 1981. He then enrolled at Albany State University on a football scholarship. Sheffield played pro football with the Pittsburgh Steelers and the Detroit Lions.

He said the difference between many offenders who receive parole and him was a decision he made.

“I made a conscious decision to turn my will and my life over to God," he said.

Sheffield was paroled in 1997. His 10-year sentence was commuted in 2003, and his political and civil rights were restored.

Today, he is the manager of the Georgia Pines Community Service Board’s Addictions Recovery Support Center in Thomasville. He is a certified addictions counselor.

“I’m here to tell you this morning, the work that you do is relevant and the system (parole) that you have created is effective. From my life experience, it works,” he told board members.

Following his presentation, Sheffield was presented with a pardon by parole board Chairman Terry Barnard.

“The process to apply for a pardon is no small thing," Barnard said. "It is an act of official forgiveness by the state of Georgia, and Chris’ presentation today is further indication that he is certainly deserving of being pardoned."

Sheffield previously completed the pardon application, but had not been notified about the board’s decision.

Becoming emotional, Sheffield said he wished his mother, who passed away in 1999, had been present to witness that he had fulfilled the promises she had asked of him.

During his presentation, Sheffield told the board that offenders leaving the system need to be prepared for the opportunities that come.

“Because of the opportunity the parole board gave me, I then was able to re-educate myself and position myself to educate and re-educate others, and that’s been the most gratifying thing that I’ve received,” he said.

“I think God has allowed me to exist and possibly even created me from the beginning to be in this position so that I can assist those who do not know the way from point A to point B," Sheffield said. 'I want to tell you that if you had not given me the opportunity to change my life in 1997, then I would have spent the remainder of that 10-year sentence in that institution, and God knows where I would be today.”

The video of the August Parole Board meeting will be made available on the State Board of Pardons and Paroles’ website and is available now at https://youtu.be/8CZC79TK3zs.