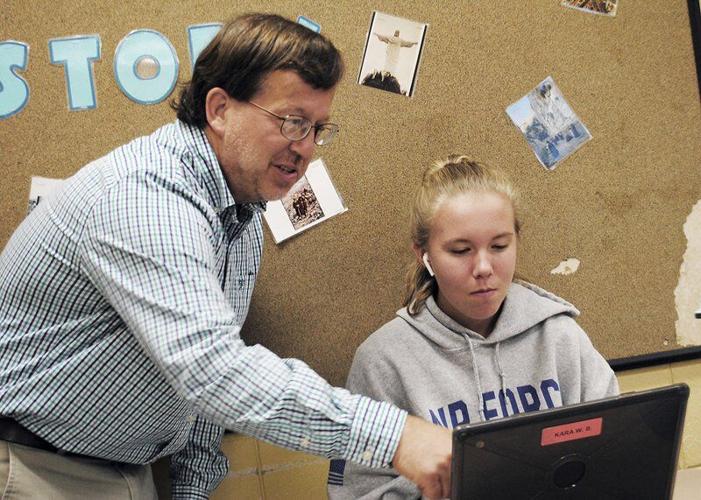 THOMASVILLE — Thomas County Central High School World History teacher Christopher Wilson is the epitome of a Yellow Jacket alumnus. He graduated from and has children who graduated — or will graduate — from TCCHS and has taught at his alma mater for 23 years.

“I’ve always been one,” Wilson said of his TCCHS Yellow Jacket status. “There is no other school that is better. I know I received a good education as a student of Thomas County Schools. Even though I didn't realize it as a student, the faculty cared about us. Also, the closeness of the faculty makes it a family atmosphere.”

He graduated from then-named Central High School in 1990, earned his bachelor’s degree in secondary education (history) and master’s degree in educational leadership at Valdosta State University, and started as a TCCHS substitute teacher in 1995.

“I figured if I hung around enough, they would give me a job,” he said. “[Dr.] Dusty Kornegay gave me the opportunity. I had no plans of moving away, especially after meeting my wife, Jennifer.”

“We’ve all graduated from Central; Cam will eventually,” he said jokingly.

Before joining the education field ranks, Wilson worked in the emergency room at Archbold Memorial Hospital. He shares a prank story from his last day there before he left to teach full time.

“One of the nurses hid in a body bag and scared the poop out of me,” he said. “Even the E.R. doctor thought that was funny.”

Wilson wanted to teach because he enjoys history and interacting with youth.

“The interaction with the young people [encourages me to keep teaching],” Wilson said. “Students learn in different ways: visual, auditory, tactile, etc. I hope they pick up on something I tell them.”

His subject has held his fascination throughout his 23 years as an educator.

“I’ve always been fascinated with how our world changed to how it is today,” Wilson said.

His love for World History inspired him to be a social studies teacher, for it always covers a wide range of topics. His favorite lesson involves the Cold War.

“The unit over the Cold War [is my favorite] because my parents and I both lived through it,” Wilson said. “My daddy was a Marine and narrowly missed being sent to Vietnam. They told me stories of actually doing the ‘duck and cover’ drills when they were in elementary school. I remember the Reagan years, the climax of the Cold War, and the collapse of the Soviet Union listening to Dan Rather on the 6:30 p.m. CBS news!”

The educator, known for his anecdotal humor in his lessons, will always be beloved by students for his humor and knowledge.

“He’s very creative with what he does,” student Kara Welch-Brinkley said. “He brings light to the classroom, but he also has his professional side. He’s very funny, but again, he is professional. He just makes everything entertaining.”

“I know there (are) history nerds throughout the world, but not like him,” Herbert said. “And he’s so good at teaching history as well. He dives deep to make sure you understand what he’s teaching, and it really helps.”

Wilson’s students also appreciate the care he shows them.

“He respects that I’m quiet, but [he] still tries to get me to talk,” she said. “He always tells his students that if they ever need someone to go to for advice, work problems, or just anything to come to him,” Herbert said. “He influences me to be better and highly encourages me to learn more about history, which is actually now my favorite subject.”

Welch-Brinkley values how Wilson considerately pushes her to open up during class.

“He respects that I’m quiet, but [he] still tries to get me to talk,” she said.

When asked about his essential advice for his students, Wilson encouraged them to find a career they love and pursue it.

“You control your future,” he said.

In his off time, Wilson enjoys fishing and studying the Bible. He plans to continue educating future generations for at least seven more years.

“Each year is a new beginning and challenge,” Wilson said. "I may teach a couple of years past retirement so Jennifer and I will retire together.”