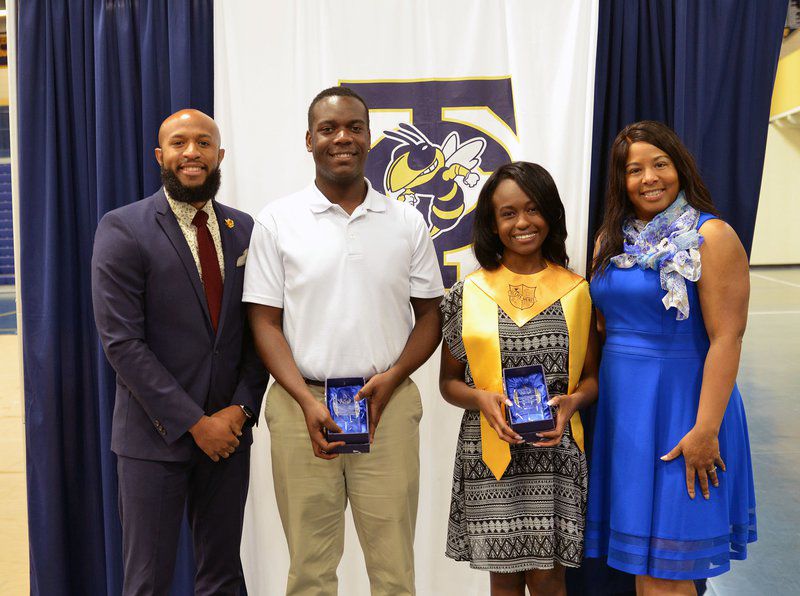 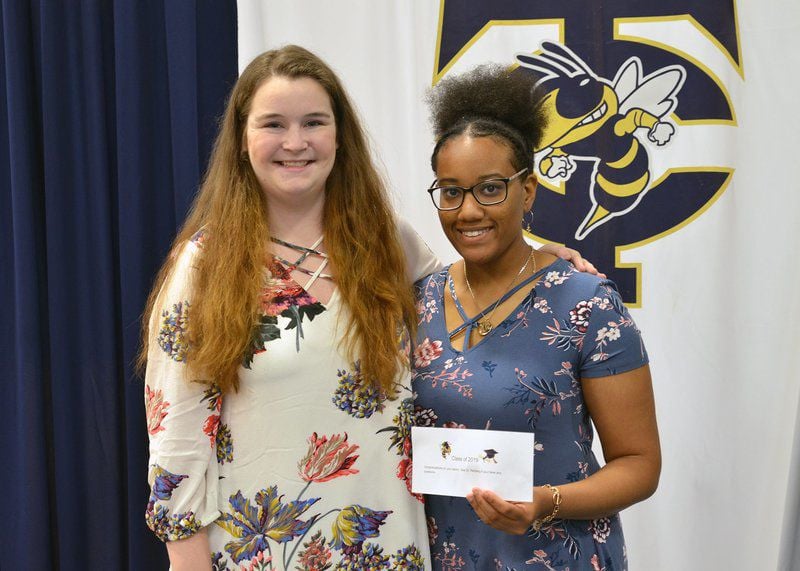 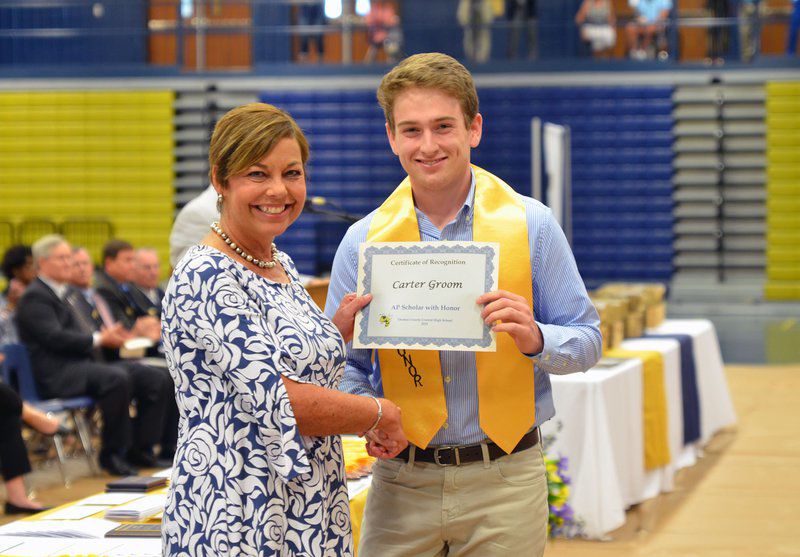 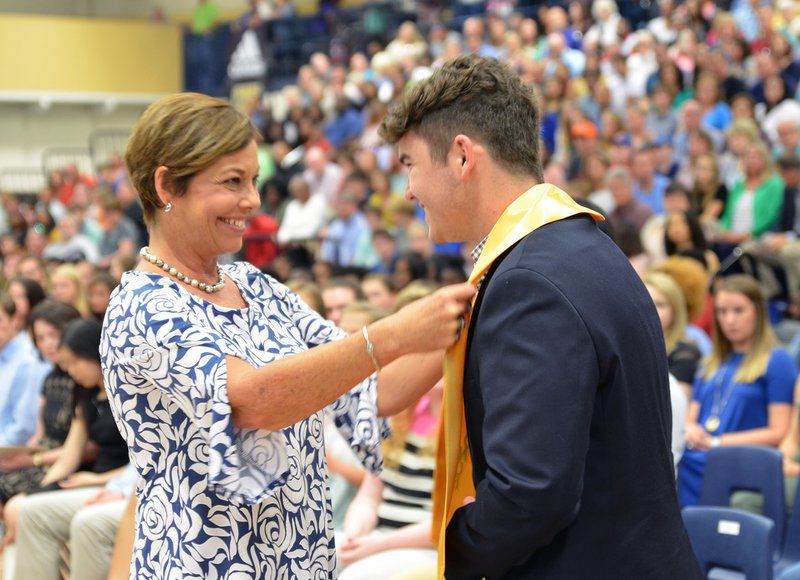 Submitted photoSenior Tyler Carter and Principal Trista Jones share a smile after she placed his honor graduate stole around his shoulders. 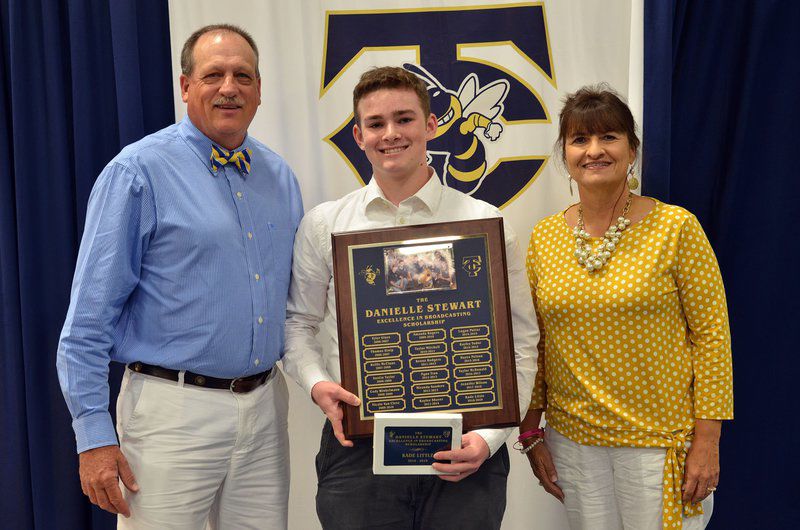 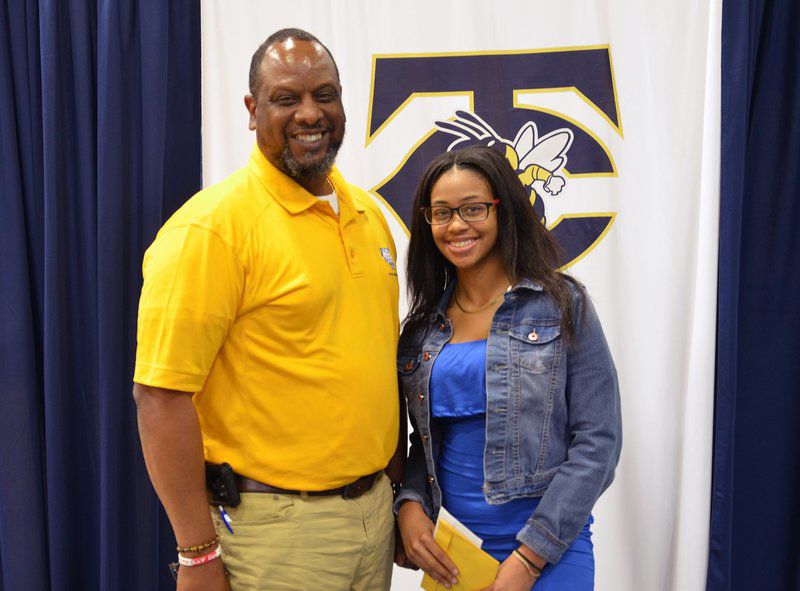 Submitted photoSenior Tyler Carter and Principal Trista Jones share a smile after she placed his honor graduate stole around his shoulders.

THOMASVILLE — As another school year draws to an end, one group of students is preparing to say goodbye to high school forever. But before they go, Thomas County Central High School pauses to honor these students’ accomplishments.

TCCHS held its annual Honors Night ceremony Thursday, May 16. The event, which took place in the school’s gym, traditionally occurs the night before seniors’ last day of high school. It recognizes impending graduates for academic and elective achievements and bestows various scholarships to deserving recipients.

“Student success is our goal, so Honors Night is a celebration for the students but also for the friends, family members and educators who have encouraged and supported these young people throughout the years,” TCCHS Principal Trista Jones said.

Nasya Sanford earned cords for art and dual enrollment. She also received the NAACP C2MI Scholarship and a scholarship from the TCCHS Art Department.

“The most meaningful would have to be my art cord and winning the art scholarship,” Sanford said. “Art means so much to me. It’s a way of expression and an extension of my personality. Even though I won’t be majoring in art, I do plan to minor [in it] because it is something that I enjoy doing.”

Kade Little earned a Career Technical Agricultural Education cord for Audio and Video Technology and Film and received the Danielle Stewart Excellence in Broadcasting Scholarship. He says the award is the most meaningful to him because it was voted upon by his classmates.

“It’s a chance for those who don’t feel like they matter to get recognized,” he said.

Sanford adds it means that teachers and faculty appreciate and are proud of the hard work seniors put in throughout their four years of high school. Though it’s been a long and tough journey, Sanford says, she has enjoyed her time at TCCHS.

“I am extremely proud of myself for keeping my grades up and being able to graduate and never giving up when I really felt like the work was becoming overwhelming,” she said. “I may not be graduating as an honor student, but I have accomplished so much and to still be graduating with an A average of 92.7 is awesome.”

Graveside services for Madeleine Stewart Alred of Moultrie are at 11 a.m., Wednesday, April 14, 2021 at Pinecrest Cemetery in Moultrie. Her niece, the Rev. Emily Sterling Strongman will be in charge of the service and assisted by the Rev. Stephen Grantham of First United Methodist Church in …

88, of Thomasville, GA. passed away on Saturday April 10, 2021 at Archbold Memorial Hospital. Family and friends are invited to visit his online memorial tribute page for full obit at www.allenfh.com.