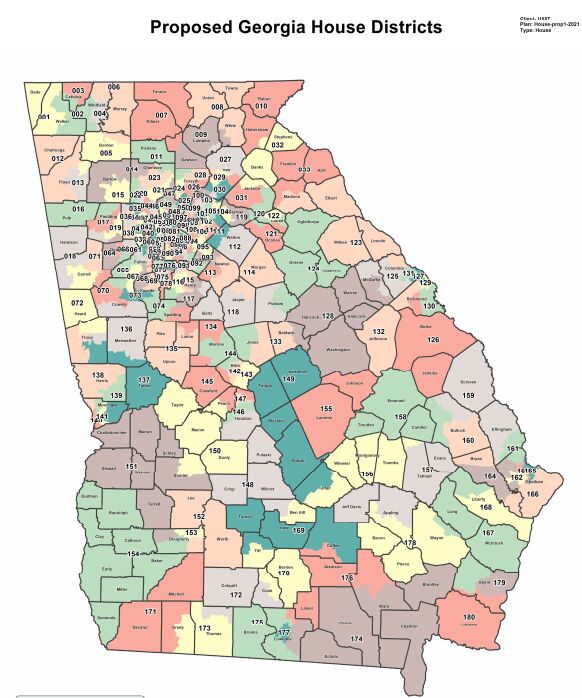 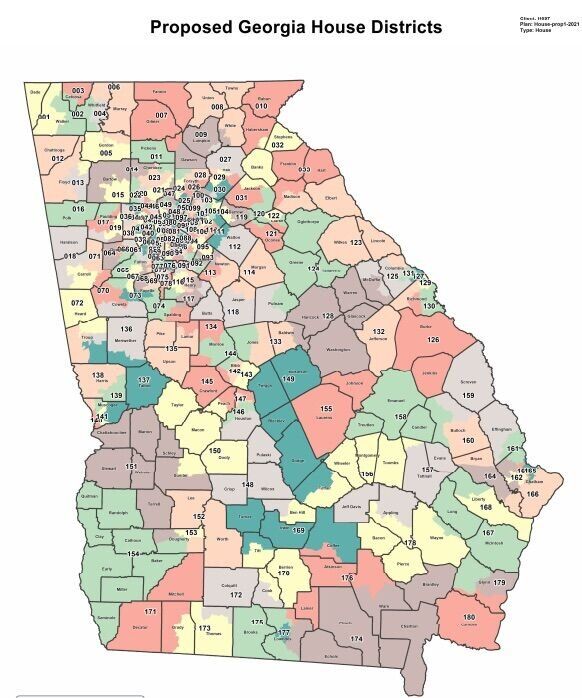 ATLANTA — New voting district maps for Georgia's House and Senate are moving right along despite much debate and opposition to the Republican-led proposals.

Rep. Philip Singleton, R-Sharpsburg, said he was displeased with the Republican-led House committee’s map, saying it doesn’t protect what he called "communities of interest" and puts his seat at risk.

“My proposal preserves majority-minority communities and communities of interests and would preserve myself and Rep. (Mandisha) Thomas from Fulton County because it would contain more of our current precincts in line with your rules,” said Singleton, whose district represents most of Coweta County, during the House committee public hearing Monday.

Coweta resident Jan Horne, who identified as a Republican, said the Democratic Caucus had presented a better map and was displeased with the Republican-dominant committee.

“South Coweta is already being pulled into the proposed (District) 134," Bryant Frost, another Coweta resident, said Monday. "There’s no population based argument for why we’d need northern Coweta, a full fifth of our county, to be placed into south Fulton (County)."

Other comments expressed during the public hearing Monday indicated Singleton was being targeted due to his opposition to some Republican leadership.

By Tuesday afternoon, the committee had presented a substitute of the map but none of the changes were made for Coweta County redistricting, which bore the brunt of public comments Monday.

“I was very sympathetic to the people of Coweta County yesterday but we have a job and that's to draw a map that complies with the law and that is what we have done,"  said Bonnie Rich, R-Suwannee, chair of the House committee. "After we comply with the law, there is not one issue that predominates; it's a balancing factor."

Rich said the committee map includes some Democratic Caucus suggestions, and some of the changes in the map from Monday to Tuesday included changing some district boundaries in and around Fulton County, with the majority of the changes moving incumbents back into their respective districts.

“We were very appreciative to have the Democrat caucus prepared map and we did take into consideration some of the components, and I think that you'll probably see that in some of the areas of the map there are some similarities and there are some points upon which we agree,” Rich said.

Both the Democrat caucus map and the map approved by the committee Tuesday received a "B" grade by the Princeton Gerrymandering Project, which partnered with Fair Districts GA to compile at least 100 fair maps and assess maps generated by lawmakers.

"The committee map now splits 62% of cities that might fit in a single House district, a reduction from the 63%," said Karen McCown, Fair Districts representative, adding that the new committee map was less competitive but safer for incumbents.

Before the vote, she encouraged the committee to adjust the partisan balance, though it was within Princeton's maps benchmark ranges.

"But is at the far end of each of them," McCown said. "To be more even with partisan balance, (maps should be) near the midpoint of 95 Republican-leaning and 85 Democratic-leaning districts."

The current makeup of the Georgia House is 103 Republicans and 77 Democrats.

The redistricting process comes every 10 years upon the release of new U.S. Census population data. Georgia's Census 2020 data shows a statewide growth of 1 million people — or 10% — since 2010; all of the growth came in minority populations, with more than half of that growth in metro areas of the state.

Georgia Republican senators were accused of breaking up minority populations in its district map proposal before they voted Tuesday.

Democrats spent more than two hours speaking against the proposal they felt was rushed and broke up many majority-minority areas and communities of interests.

"Doesn't moving (more than 24,000) Black residents out of the 17th district completely destroy this community of interest," said Democrat Sen. Emanuel Jones of Decatur, referencing a proposed Henry County district in metro Atlanta. "To crack them open and split them up into two districts and add one of the new districts into Henry County is wrong and I believe is a violation of the VRA."

The proposal approved out of the Senate redistricting committee Friday, less than three days after it was made public for review. The vote to approve it Tuesday was 34-21, along party lines.

Republicans who argued against Democrats' opposition Tuesday referenced the 2001 redistricting process in which Democrats were the majority and whose maps were later ruled unconstitutional by federal judges due to gerrymandering.

Republican Sen. John Kennedy, who chaired the Senate redistricting committee, also referenced the Democrats' 2001 speed in approving a redistricting map out of committee — on day three of the session, as did Kennedy's committee on Friday.

All new district maps must be approved in both chambers. No vote has occurred on any of the state's new proposed congressional districts.