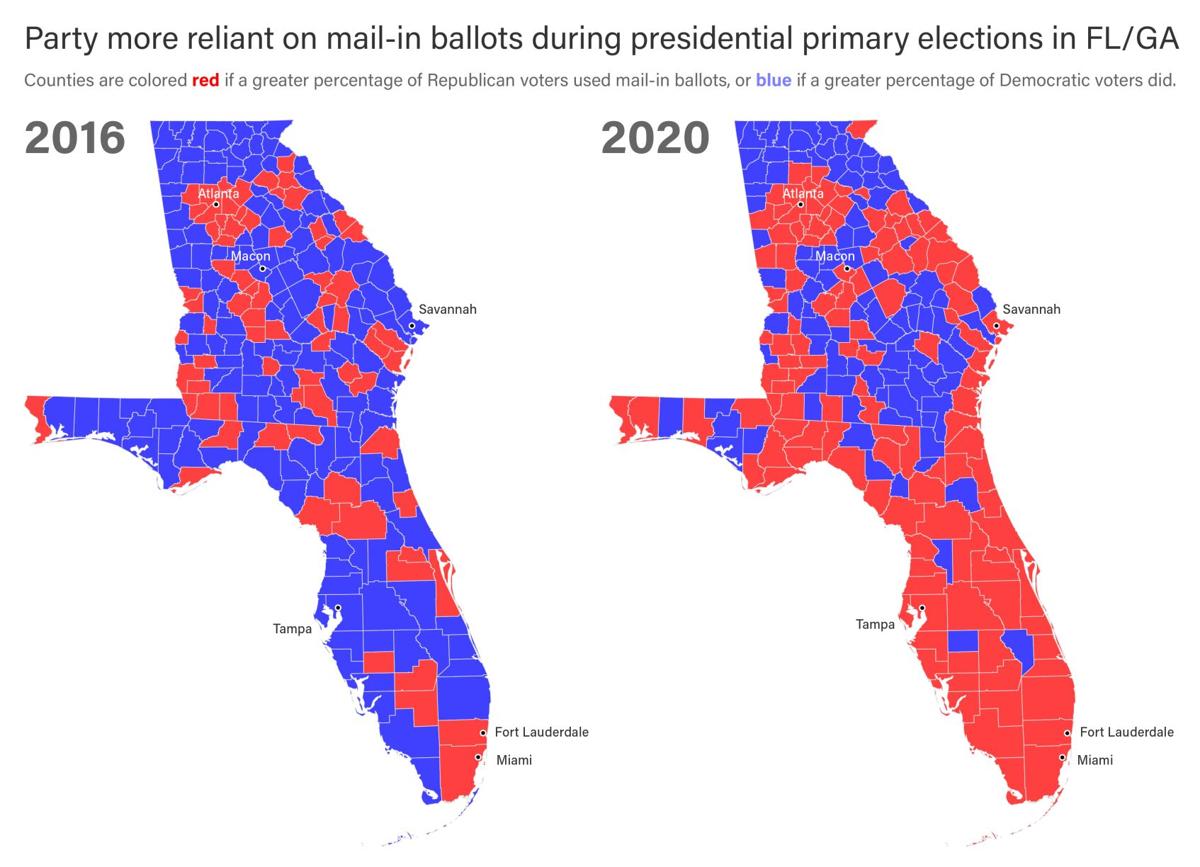 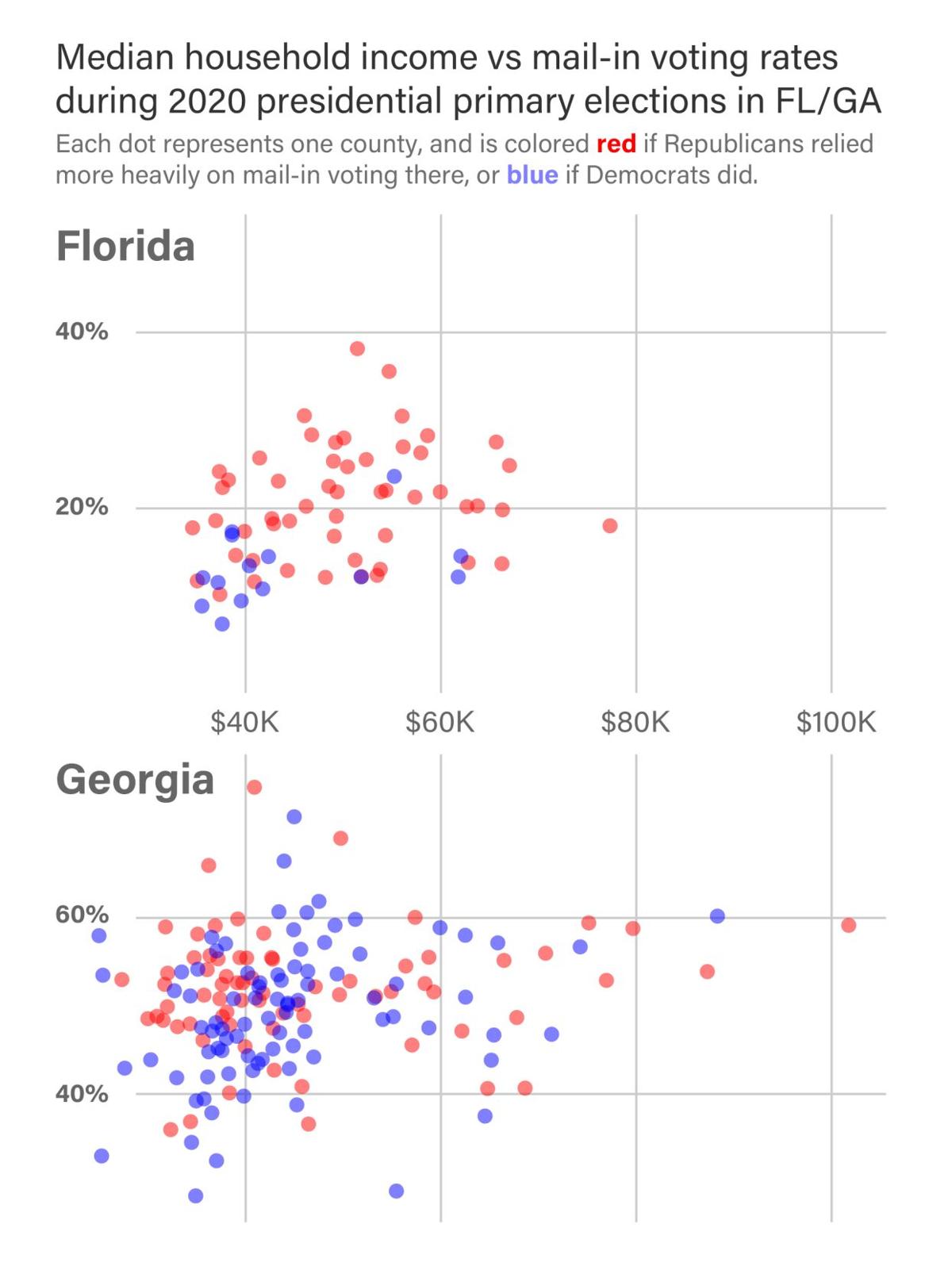 ATLANTA — Despite cries of voter fraud as mail-in voting has grown exponentially, data shows in Georgia and Florida, Republicans have relied on it more heavily than Democrats.

With Florida already seen as a key state in the battle for president, Georgia has emerged as an up-and-coming battleground since the 2018 gubernatorial election was decided by just under 55,000 votes.

The close race between now Gov. Brian Kemp and his Democratic opponent Stacey Abrams ignited enthusiasm to flip the state Blue, putting Republicans in a position where they have to put up a fight in a state they haven’t historically had to worry about.

As President Donald Trump recites conspiracy theories about mail-in voting, a CNHI analysis of Georgia and Florida voting data from the 2016 presidential preference primary and 2020 primary, showed Republicans opted to vote from their own homes more often than Democrats.

Research shows older voters usually align more with the Republican party, possibly giving reason to the party’s escalated use of mail-in ballots during the pandemic. However, Florida’s 2020 presidential preference primary fell in the beginning weeks of the virus — just 16 days after the first cases in the state were confirmed.

Georgians, on the other hand, voted in the delayed presidential preference primary as well as general primary races in June.

Still, data shows both Florida and Georgia Republicans voted by mail at a higher rate than Democrats. But the negative rhetoric about mail-in — or absentee ballot — voting hasn’t gone without impact.

Enrijeta Shino, assistant professor of political science at the University of North Florida, said that prior to 2020, Republicans already tended to vote by mail at higher rates, but Democrats are gaining ground in their use of the method.

With the increased reliance on remote voting due to the pandemic, she said, the effect has been a expansion and diversification of the pool of voters participating in elections.

“This leads up to think how politicized this vote method has become because of (president Donald) Trump’s criticism of the method and how Republicans are taking cues from the president and following with it,” Shino said. “This is a bit concerning because it is going to shake people’s trust in the voting method, which we know is safe. Fraud cases are so small and isolated, but that also may make voters lose trust and faith in the electoral system and the outcome of the election.”

Shino’s research has indicated that neither party benefits more from expanded use of mail-on ballots. Younger voters are also starting to slowly take up the practice whereas before, mail-in ballots were more likely to be utilized by “old, educated and strong partisans.”

In the suburbs outside of Atlanta, the Trump Victory campaign has continued door knocking after only a brief hiatus due to the pandemic. Areas like Cobb and Gwinnett counties are predicted to make all the difference in what presidential candidate wins the electoral votes of the Peach State.

Brian Barrett, regional political director for the Trump Victory campaign, said that the party wants to give voters the opportunity to cast a ballot however they feel comfortable — including via absentee.

“The way we look at it is we have a targeted group of voters that we need to get out and vote — they’re low propensity voters or they're new voters and our goal is to get out, engage with them, talk to them about the voting process, and let them choose the medium, and then it's sure they actually go and do it,” he told CNHI. "So yes, as absentee has grown exponentially, we give every voter that we talk to the opportunity to cast absentee."

Trump door knockers carry absentee ballot applications with them as they peruse through Georgia’s suburban neighborhoods. Mailers sent throughout the campaign by the Georgia Republican Party encouraged voters to vote absentee for Trump.

The messages contradict what the president himself says about the voting method. On social media and in press conferences, Trump has repeatedly attacked mail-in voting with unproven allegations of mail fraud and disinformation.

A survey of 11,000 Floridians conducted by Shino and her research partner showed that Republicans were more likely to lie about their use of mail-in voting.

As part of the questions, respondents were asked how they voted in the past and how they plan to vote in the upcoming election. The answers were compared to Florida statewide voter file and history file to obtain respondents validated method of voting in the past.

"Republicans were misreporting their usage of vote by mail at a higher rate than Democrats or non-party affiliates,” she said. “…We've asked them what voting method are you intending to use this on this election and these people again — that they have voted by mail in the last two elections — Republicans reported the higher intent of not voting by mail in this election. When if you think, logically, this is the safest for their health.”

Despite the increase in use of mail-in ballots across both parties, some experts are skeptical whether or not the utilization of the voting method will outlast the pandemic.

Trey Hood, political science professor at the University of Georgia said while there’s no doubt that the rate of absentee ballot use will continue to be higher than in years past, it may not remain that way.

"There's no doubt about it there's going to be much higher levels of absentee-by-mail balloting, as compared to previous elections, but it's still not going to be a majority of the mechanism for how ballots are cast,” he said. "That’s still quite a change for Georgia, now again the big question is, two years from now — hopefully the pandemic is gone — is it still going to be at that rate or not? I don't know the answer to that but time will tell."