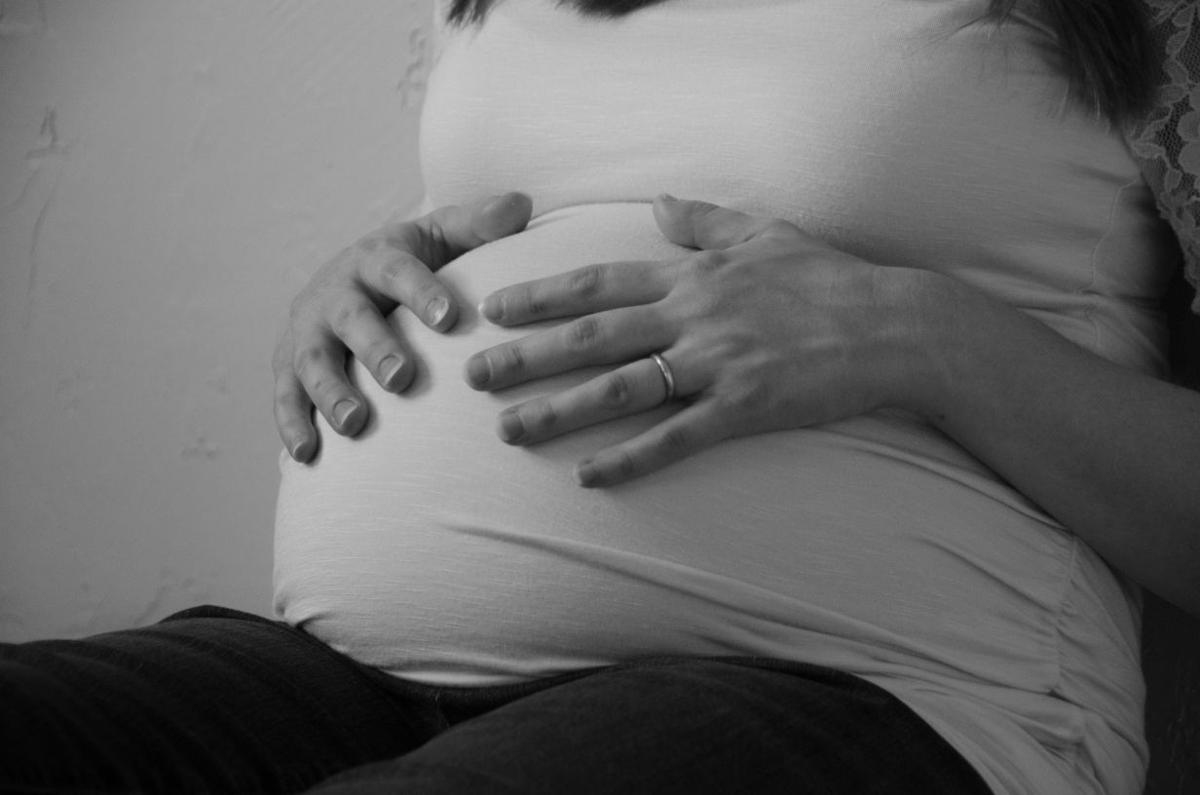 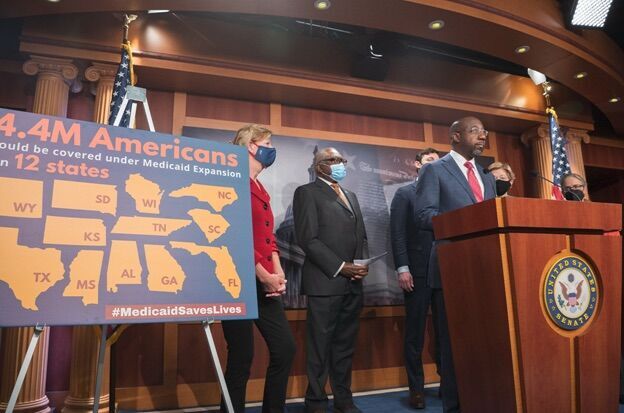 Georgia Sen. Raphael Warnock, at podium, speaks at news conference in late September on the importance of a federal bill that would expand Medicaid to 12 states that have not opted into expansion.

Georgia Sen. Raphael Warnock, at podium, speaks at news conference in late September on the importance of a federal bill that would expand Medicaid to 12 states that have not opted into expansion.

As various states restrict abortions, many low-income women will be burdened with medical expenses during and after an unwanted pregnancy – especially in states that have not expanded Medicaid benefits.

Twelve states have not expanded Medicaid — including Georgia, Alabama, Mississippi and Tennessee, and have also launched legislation to decrease the timeframe a woman can get an abortion, some as early as six weeks – before most women have even learned they are pregnant.

According to the Centers for Disease Control, 42.1% of women used Medicaid at delivery in 2019, with Black and Hispanic women far more likely than white women to rely on Medicaid to cover births.

“As the largest payer of reproductive health care in the nation, Medicaid is essential for people to access sexual and reproductive health care and is key to preventing maternal mortality, which disproportionately affects Black women,” said Alexis McGill Johnson, president and chief executive officer of Planned Parenthood Federation of America. “Despite its tremendous benefits, 12 states have yet to expand Medicaid, disproportionately impacting people of color, LGBTQ+ people and women who, because of systemic discrimination and barriers to economic advancement, are more likely to use Medicaid.”

Expanding Medicaid like the other 38 states would, in general, cover more low-income Americans up to age 64 with incomes up to 138% of the federal poverty line instead of 100% of the poverty line. The federal government would increase its share of the costs to 90% and the states would bear a 10% cost.

More than 20.2% of women ages 18-44 in Georgia are not covered by private or public health insurance, above the national average of 12.6%. The CDC reports in 2018, Georgia’s maternal death rate was 27.7 per 100,000, among the top five highest in the country along with Alabama.

“The pandemic is teaching us what we should have known and that is that we need to make sure that all Americans – the 4.4 million Americans, and 646,000 Georgians, who qualify for Medicaid expansion – are rescued from a hostage situation,”  said Sen. Raphael Warnock, D-Georgia, sponsor of the proposed “Medicaid Saves Lives Act,” which would provide health care insurance to Americans with low incomes in the 12 states that have refused to expand their state Medicaid programs.

Warnock said the “Medicaid Saves Lives Act” would provide access to preventative health care services; improve health outcomes and prevent premature deaths; lower costs for uncompensated care, which would in turn reduce hospital and provider closures; and improve economic mobility for Americans with low incomes by enabling them to work.

According to Planned Parenthood more than 100,000 women of reproductive age, including more than 50,000 Black women and 12,000 Latina women, would gain affordable health insurance and access to a full range of sexual and reproductive health services.

A 2018 study by the state's Maternal Mortality Review Committee shows that 70% of the state’s maternal deaths in 2016 could have been prevented had Medicaid been expanded.

The committee study concluded that expansion of Medicaid was an underlying yet significant factor throughout the case reviews. The committee also noted in states where Medicaid expansion was adopted, there were reduced maternal mortality rates and positive maternal health outcomes.

“In Alabama, we have one of the most restrictive postpartum Medicaid requirements. Women who are covered under Medicaid during their pregnancy and give birth then lose their Medicaid benefits 60 days postpartum,” said Jane Adams, campaign coordinator for Alabama Arise, an organization that advocates for residents marginalized by poverty. “(Seventy percent of maternal deaths) occurred after 60 days postpartum which is when women no longer have health insurance anymore.”

More than 300,000 residents are estimated to benefit from Medicaid expansion, including more than 51,000 women of reproductive age.

Sen. Garland Gudger, R-Cullman, said his hesitance in funding the state’s 10% under an expansion is due to uncertainty of costs.

“I think the overwhelming question is the amount of money, if the federal government ever pulled back, that we would be having to pay in and that sounds like the concerns of most of my colleagues,” Gudger said. “I think people are in favor of more health care for anyone, especially people who can’t afford it in Alabama. We don’t want to approve something like that and it come back and bite us and the government comes back and pull it back and we don’t have that budget.”

Gudger, along with other state Republicans, voted for the state’s restrictive “heartbeat” abortion bill. He didn’t state specifically how the state would fund uninsured pregnant women who don’t qualify for Medicaid under current guidelines.

“I'm against funding anything for abortion. I’d rather be on the front side of it... Helping women’s clinics with more education on the front end and anything we can do for women through the pregnancy and afterward as far as anything with continued education and put our money there,” Gudger said.

Currently, a two-person household must have an income of less than $2,120 per month to qualify for Medicaid pregnancy benefits. The U.S. Census estimated about 16.4% of women ages 19-44 in Alabama are not covered by private or public health insurance.

Mississippi Gov. Tate Reeves has been vocal in his opposition to Medicaid expansion while he supports restrictive abortion laws. In his state, 19.2% of women 18-44 are not covered by private or public health insurance, according to the 2020 census.

“All of our rural hospitals need Medicaid expansion because we have so many uninsured people. This is a good way to help,” state Rep. Michael Evans, I-Preston, said. “A lot of people work two jobs and still can’t afford it, so I’m all for helping them."

Medicaid expansion would allow an estimated 230,000 more Mississippians to be eligible for benefits. Planned Parenthood estimates more than 43,000 women of reproductive age would have access to sexual and reproductive health services, such as birth control, through expansion. While reported costs to the state have varied, Evans suggests the state adopt a neutralizing Medicaid expansion bill.

Currently, a pregnant woman from a two-person household must have a household income of less than $2,890 per month to qualify for the Medicaid pregnancy benefit; Evans said he would support lowering income requirements so more women could qualify.

“We have a lot of single women out there and they need all the help they can get,” he said.

This year, Tennessee legislators approved an extra $7 million in the state budget to expand postpartum coverage from 60 days to 12 months.

The pregnancy-related mortality ratio was 28.6 in 2019 and 74% of all deaths were determined to be preventable, the health department report shows.

Currently, more than 13% of women ages 19-44 in Tennessee are not covered by private or public health insurance, according to census data.

Pregnant women in Tennessee can get Medicaid coverage if their household income is less than or below 250% of the federal poverty level; for a household of two that is $43,550 per year, or $3,629 per month.

While the state has expanded postpartum coverage, Medicaid expansion in general has not been approved. The expansion would open benefits and coverage to more than 300,000 Tennessee residents. Planned Parenthood estimates the expansion would benefit more than 31,000 women of reproductive age.