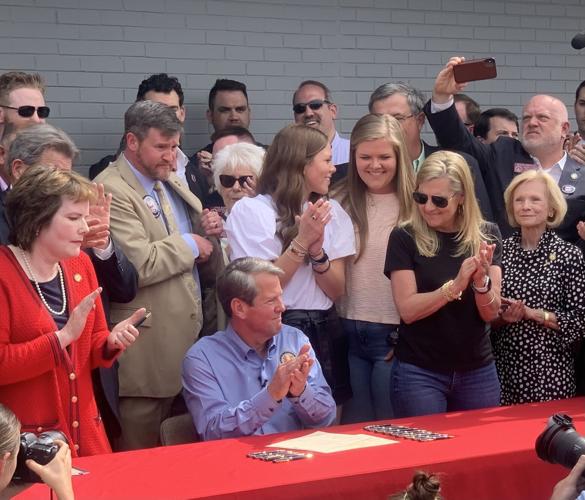 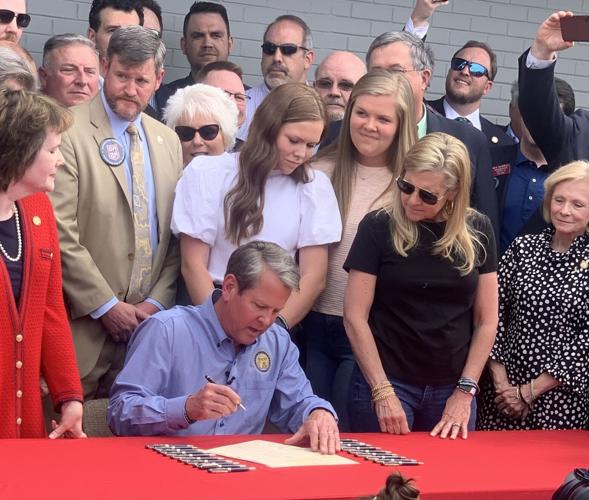 ATLANTA — Georgians no longer have to apply for a permit to carry a gun in public.

Gov. Brian Kemp signed the new law Tuesday outside Gable Sporting Goods in Douglasville, where he bought his daughter, Lucy, her first firearm— a Glock 43X 9 mm, he said.

“We did that because not only did we believe in the Second Amendment, but we want Lucy and both of her sisters and all Georgians to be able to rightfully defend themselves,” Kemp said.

The new law, which is effective immediately, was part of Kemp’s 2018 campaign promises and a priority this legislative session, which ended April 4. SB 319 does away with requiring residents to apply for a weapons carry license, but doesn’t change where guns are prohibited, such as government buildings or airports where security checkpoints are performed.

Prior to Kemp’s signature on the bill, those wanting to carry a concealed weapon in public were required to apply for a permit, typically at a cost of $75, and also to undergo a mental health and criminal background check. Background checks are still required to purchase a gun from a licensed gun dealer.

“SB 319 makes sure that law-abiding Georgians, including our daughters and your family, too, can protect themselves without having to have permission from your state government,” Kemp said. “The Constitution of the United States gives us that right.”

Democrats and opponents have argued that the bill will lead to more crime and an increase in criminals illegally carrying guns.

"The governor is signing away lives when he signs this bill. It is a sad day in Georgia when we have to watch legislation enacted that we know will cause harm, as this will," said Georgia Senate Minority Leader Gloria Butler. "... He wants more guns on the streets, and the shameful outcome of that is more gun violence."

Supporters of the Republican-backed bill have argued it is needed to for Georgians to feel safe amid rising crime.

"Whether it will increase or reduce crime will be the question in general,” said Whitfield County Sheriff Scott Chitwood. “… Those authorized to carry now vs. the criminal-minded individuals that currently carried regardless of how the law reads.”

"Being that an individual can currently carry in their vehicle, home and place of business without permit, not much will change in that aspect,” Chitwood continued. "However, it is not uncommon to find a convicted felon in possession of a firearm, which is a violation now.”

“I don’t expect that (constitutional carry) will have a big impact around here,” Paulk said. “The criminals don’t care — they’re going to get the weapons anyway — and a law-abiding citizen with a weapon won’t make trouble.”

He also said it's impossible to say how much of that is due to interest in the constitutional carry bill.

"This bill might help increase sales a little but, but it's hard to tell how much," he said.

On Tuesday, Kemp also signed a companion bill, HB 218, which allows those licensed to carry a weapon in other states to do so in Georgia.

*Reporters Charles Oliver and Terry Richards contributed to this report.

What do you think of Elon Musk buying Twitter?

Lenford Neil Willis, died peacefully in his home in Vonore, TN, May 8, 2022. He was born in 1947 in Thomasville, GA to the late Eva Mae & Buster Willis. He is survived by his wife, Patricia; his son, Greg & Lauren Willis, with grandchildren, Ben & Charlie who reside in Austin, TX…