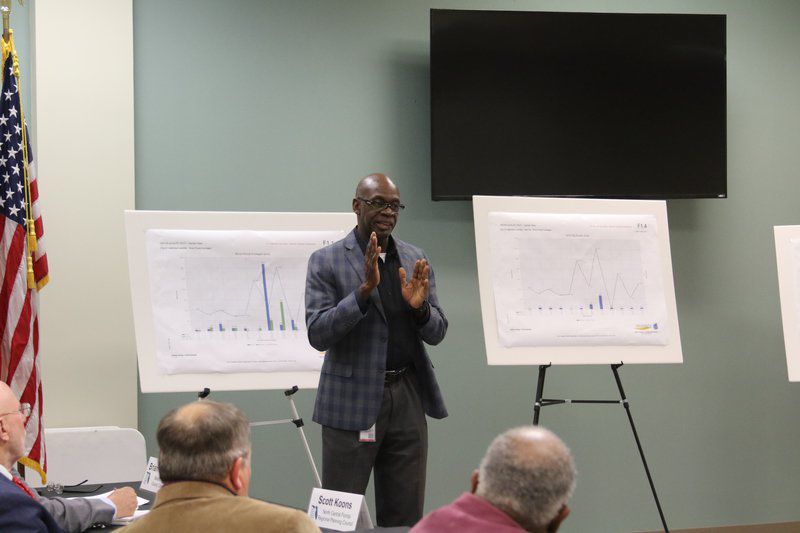 Chris Herbert | Valdosta Daily TimesDarryl Muse, Valdosta utilities director, started the workshop with a presentation about how Valdosta responded to the spill. 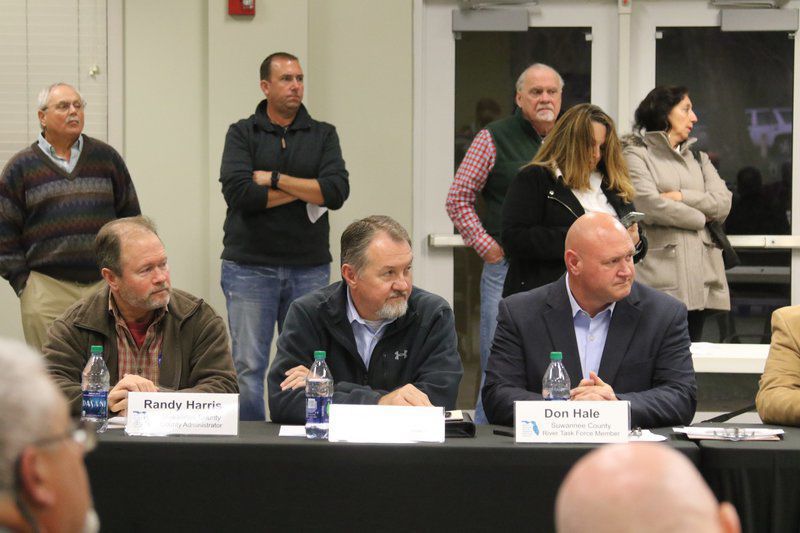 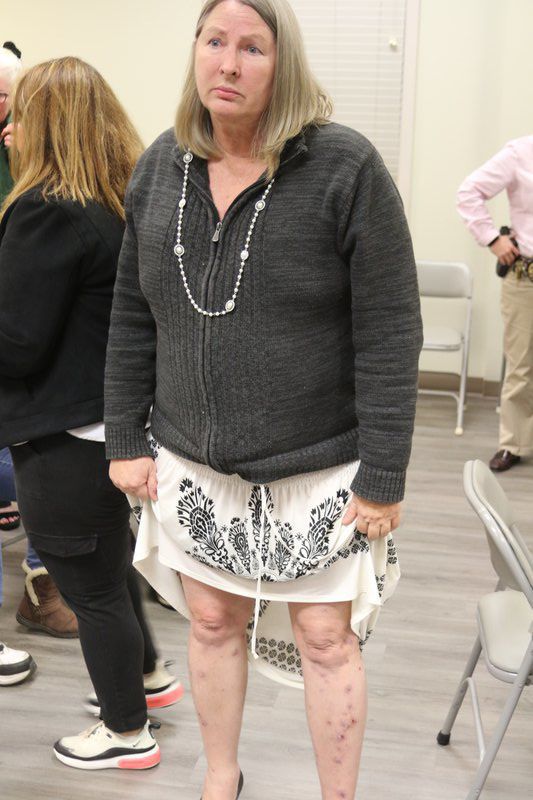 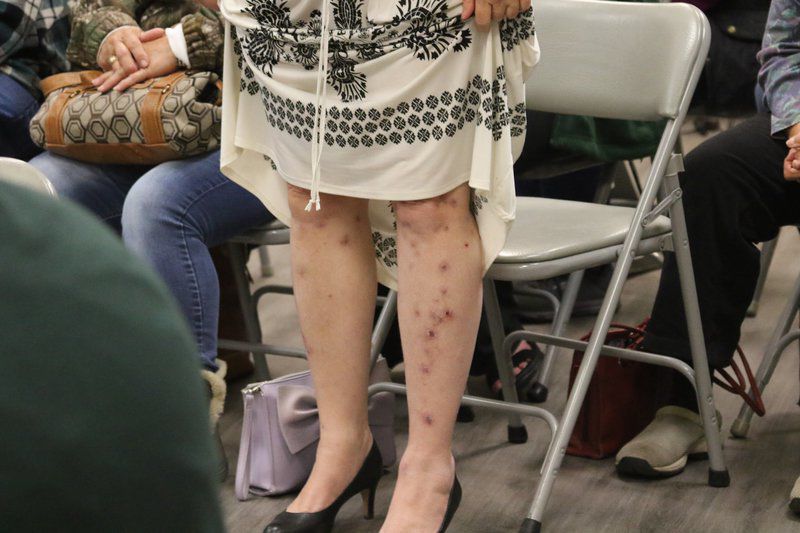 Chris Herbert | Valdosta Daily TimesDenise Shirey, resident of Hamilton County, Fla., stood up during the meeting to show sores that she claims were caused by the water contamination. 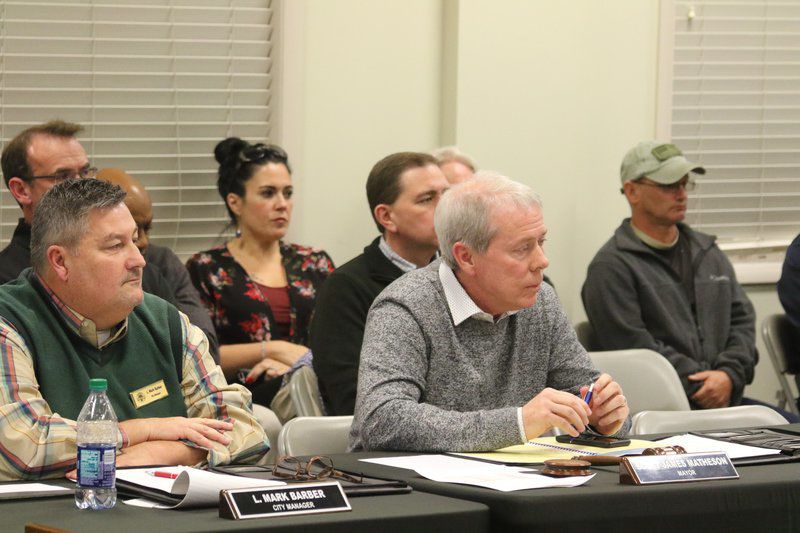 Chris Herbert | Valdosta Daily TimesDarryl Muse, Valdosta utilities director, started the workshop with a presentation about how Valdosta responded to the spill.

Chris Herbert | Valdosta Daily TimesDenise Shirey, resident of Hamilton County, Fla., stood up during the meeting to show sores that she claims were caused by the water contamination.

VALDOSTA — Denise Shirey usually dresses to cover up her arms and legs.

“(I) get embarrassed ... it’s like, ‘why is this happening?” Shirey said. “I have a very professional job, so I hide myself so people don’t see what it looks like.”

Wednesday night, she swallowed her embarrassment, stood up and raised her skirt to her knees.

Those in attendance saw what she sees every day: sores all over her skin. Traveling across the planet for work, the 60-year-old global trade compliance professional dresses to hide the sores beneath business attire.

Work did not bring her to Valdosta this week. Instead, Shirey wanted to voice her dismay with Valdosta City officials over sewage contaminating the river.

A resident of the Hamilton County campgrounds, she moved to Hamilton County in 2014 and began developing sores within six months. Shirey lives next to the Withlacoochee River and believes water contaminated by sewage has caused her skin condition.

“I’ve been to doctors and nobody knows what it is,” she said.

Dozens packed the City Hall Annex to attend the City of Valdosta’s quarterly workshop with the Middle and Lower Suwannee River and Withlacoochee River Task Force Wednesday. Residents and officials from South Georgia and North Florida discussed the recent sewage spill by the city.

In early December, more than 7.5 million gallons of sewage spilled into the Withlacoochee River out of the City of Valdosta’s water treatment plant. The massive spill resulted from a contractor from Electric Machine Control from Trussville, Ala., disconnecting a fail-safe alarm. With the alarm disconnected, sewage flowed into the Withlacoochee for several days before water treatment plant employees noticed.

It was the biggest sewage overflow of 2019 in Valdosta. The city had a series of sewage discharges in December 2018 caused by heavy rains, but none totaled the amount of this spill.

Darryl Muse, city utilities director, opened the meeting with a presentation detailing the spill, how the city responded to it and what went wrong. Muse, City Manager Mark Barber and Mayor-elect Scott James Matheson, along with members of the Valdosta City Council, answered questions and facilitated discussions.

Barber said Valdosta was responsible for the sewage discharge and is making changes.

“We accept full responsibility, and we’re not shirking that whatsoever,” he said.

The Valdosta city manager said the contractor performed other work prior to disconnecting the alarm but went back into the water treatment plant to perform “minor changes.” The contractor did not inform any city employees of his return to the plant, Barber said.

“We couldn’t have prevented it, but it could have been found sooner,” he said.

Barber said if the contractor had informed city officials that he was reentering the plant, a city staff member would have accompanied the Electric Machine Control employee “whether it was a major or minor adjustment.”

The Valdosta Daily Times was not able to reach Electric Machine Control Thursday.

Attendees repeatedly asked officials what specific corrections and changes the city would enact, calling for more signage around the river about the spill. Several residents in the audience asked to see the city’s standard operating procedure documents and other protocols.

“What piece of paper needs to change to prevent this in the future?” Shirey asked from the crowd.

Barber and Muse said in addition to restoring the alarm, the city implemented additional warnings to the system and will install advanced data stations at city lift stations. The data stations should provide advanced notifications of failures, Muse said.

While the protocols used were corrected, Barber mentioned that new signage has been around the river. Additionally, the two city employees who did not catch the spill have been let go, Barber said.

Madison County Commissioner Rick Davis conveyed concern and frustration over the contractor’s failure telling Barber it was not good business.

Davis spoke with The Times after the meeting.

“I’m not overly impressed. I’m just going to wait and see what comes up in the next few weeks in dialogue that we’ll have with the new mayor. I think that I see some positive things there,” Davis said about the City of Valdosta’s handling of the spill. “I just felt like we’ve taken five or six steps back when we have an event like this that was very, very preventable. It’s unfortunate that there may have been loss of jobs over it, but there is consequences and there is accountability. That’s what we’re asking for.”

Hale, vice chairman of the Suwannee County Board of County Commissioners in Florida, said he is concerned about communication between Valdosta and counties affected by the spill. Hale said the initial email he received from the city did not note Sugar Creek was affected by the spill. He said he defended Valdosta against angry constituents, saying they had read elsewhere that the spill did affect the creek.

“I had crap on my face when the press release came out,” Hale said.

Some in attendance asked city officials about financial compensation, lawsuits and/or having the city reimburse North Florida residents for well decontamination.

Barber said the city bears responsibility and so does Electric Machine Control to an extent. He said EMC representatives said the company has insurance.

One Hamilton County resident said he he has to buy bottled water and gallons of water the past two years. Dressed in a red jacket and a camouflage hat, he said he cannot brush his teeth or cook with the water. The man continued asking city officials if there would be an end to the spills or if he should invest in Walmart stock because of the money he spends on water there.

When asked about potential lawsuits from residents, Barber told The Times the city and Electric Machine Control are still in discussions.

“We’re still talking with EMC about those kind of things. There’s been nothing definite because we, number one, we’re still making sure we’re having the spill situation. That is priority still at the moment,” Barber said. “We’re in contact with EMC and they speak very favorably. They like some of the ideas we came up with so they’ve been very cooperative during the whole process.”

Near the end of the meeting, Davis informed the room that an advisory announcement was expected Wednesday or Thursday morning in Madison County about sewage reaching the Withlacoochee in that area.

The Florida Department of Health officially sent out a water advisory Wednesday night saying water testing showed sewage from the spill has migrated to the Florida side of the Withlacoochee River and parts of the Suwannee River. Residents in Hamilton, Madison and Suwannee counties who come into contact with the river water should wash thoroughly, particularly before eating and drinking, according to the FDH.

The water advisory will last for an unknown period of time because of the flow of both rivers, FDH said in the statement.

John Quarterman, president of the WWALS Watershed Coalition, asked several questions during the session but ended by suggesting the city should test the river weekly and test more sites.

He and Matheson also repeated the city will hold a Mayor’s Paddle, 10 a.m., Jan. 18, in partnership with the WWALS Watershed Coalition.

Quarterman said it will be $10 for non-WWALS members and free for members.

“If you’re an elected official, you get in free,” Quarterman added.

The Rev. Roosevelt Hardy, Sr., the retired senior pastor of New Bethel African Methodist Episcopal Church (AME) located in Quincy, Florida. Since 1961, Rev. Hardy has given dedicated, committed and courageous leadership as an itinerant Elder in the AME Church. He formerly served in the follo…

Elton Jacie Coleman was born on May 26, 1952 to the late Elton and Louise Coleman. Elton departed this life on January 19, 2020. He leaves to mourn his passing his loving companion and fiancee: Mrs. Jimmie Chandler; a son: Demetrius Coleman; a granddaughter: Nakia Coleman; a brother: Larry (…