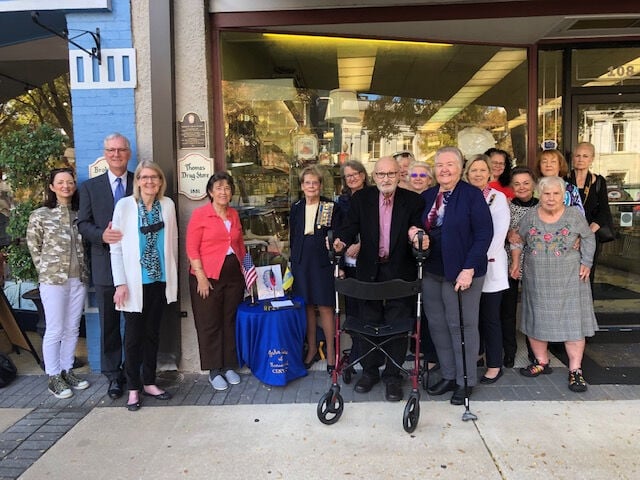 Above are John Lee of Nansemond Chapter, CDXVIIC, members, friends, and guests at the historic marking of Thomas Drug Store. 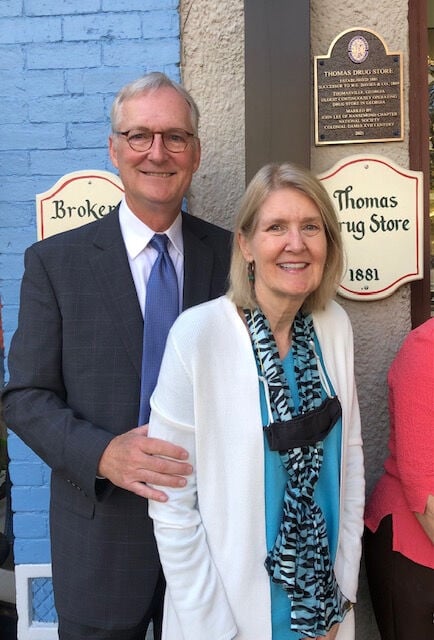 Shown are family members and building owners Dr. James A. Thomas and Margaret Thomas McCollum after unveiling of historic marker.

Above are John Lee of Nansemond Chapter, CDXVIIC, members, friends, and guests at the historic marking of Thomas Drug Store.

Shown are family members and building owners Dr. James A. Thomas and Margaret Thomas McCollum after unveiling of historic marker.

The drug store has the distinction of being the oldest in Georgia in continuous operation.

A special guest at the celebration was Grady Clay Davies, great-great-great-nephew of Mr. W. E. Davies, the aforementioned founder of the drug store.

One of the present owners of the building, James A. Thomas Jr., MD, presented the history of Thomas Drug Store. W. E. Davies, a prominent druggist in Thomasville, purchased lot 108, South Broad Street, built a store and opened it as a “drug firm” in 1869.  In 1881, Robert Thomas purchased the store and renamed it Thomas Drug Store. Thomas advertised “ Drugs, Medicine, Patent Medicine, Lightfoot Pulmonary Syrup, Garden Seeds, School Books, Stationery, Prescriptions, and Rye Whiskie [sic].” The prescriptions had to be compounded on site by the pharmacist. This was 40 years before the discovery of penicillin.

In the 1880s, Thomasville was a mecca for the wealthy Northerners because of the fresh, pure pine air and too, the railroad ended here. At one time, there were as many as 9,000 winter visitors residing in hotels, boarding houses, and country residences. They needed a pharmacy and Thomas Drug Store was it.

The year 1891 saw the installation of the blue and white mosaic tiles, which are still in place and visible in the retail portion of the store. Large prescription books from the 1880s contain a complete listing of prescriptions. Various compounding equipment, balances and scales are still kept in the store.

During the 1920s, when Prohibition was the law of the land, the sale of drinking alcohol became illegal.  The number of prescriptions for grain alcohol “solely for medicinal purposes” skyrocketed at Thomas Drugs.

In 1954, the Thomases  built a branch store on Gordon Avenue across the street from John D. Archbold  Memorial Hospital. In the 1970s, the stores began placing medicines in blister packs for customers.

In 1983, the drug store bought its first computer and it was the size of a refrigerator. It was purported to be one of the first drug stores in the country to have a computer.

For decades, the ownership was  passed down in the Thomas family. To this day, it is still the same store, same location and makes deliveries to its customers as it did 1881.

Following the impressive ceremony in front of the building and the unveiling of the historical marker, by Thomas Family members and owners of the building, Dr. James A. Thomas and Margaret McCollum, the Dames and guests adjourned for a luncheon at The Plaza Restaurant (1916), the oldest continuously operating restaurant in Georgia  which was  marked in December, 2020, by the John Lee of Nansemond Chapter, National Society Colonial Dames Seventeenth Century.