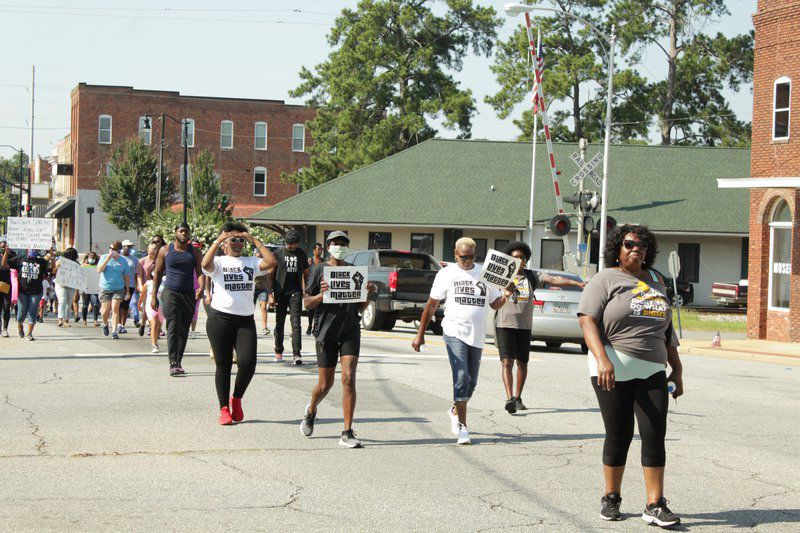 Erik Yabor/Times-EnterpriseMarchers work their way toward the Grady County courthouse. 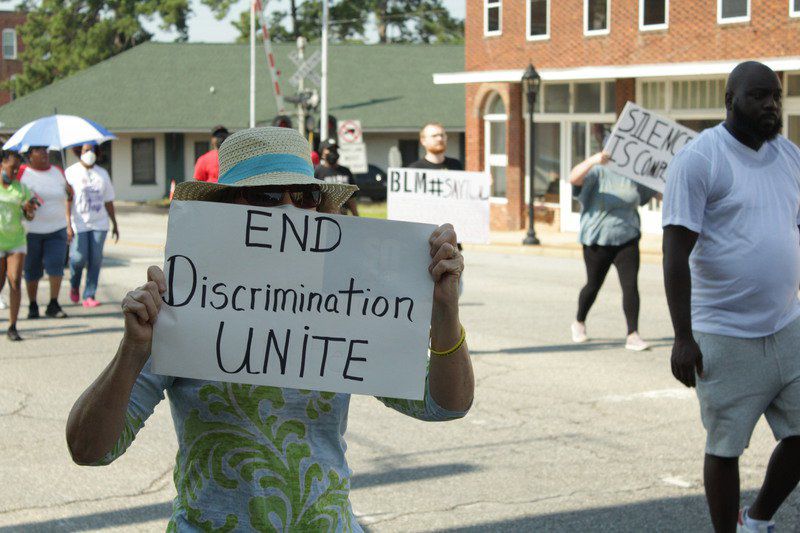 Erik Yabor/Times-EnterpriseMarchers work their way toward the Grady County courthouse.

CAIRO — More than 100 peaceful protesters marched from Holder Park to the Grady County courthouse Saturday morning to call for racial unity in Cairo.

“Today we must commit to being agents of change in the world we live in, starting right here in Cairo, Georgia,” said Felicity Felder, one of several young women who helped organize the march.

Chanting phrases such as “black lives matter” and “hands up, don’t shoot,” a racially diverse crowd marched their way from Holder Park, down Broad Street and to the courthouse.

“I did not expect to see a turnout of people of the rainbow of faces in the crowd this morning,” said Jevar McGhee, one of the event’s guest speakers.

Other guest speakers included Grady County Board of Education member Teresa Hardy, who encouraged attendees to vote, and Grady County Commissioner LaFaye Copeland, who led the crowd through a rendition of “This Little Light of Mine.”

Cairo police chief Giovannie Santos encouraged residents to be the change they want to see by joining the police department.

“We are hiring,” the chief said. “If you feel like you want to make a positive contribution to this community, come on in and join us. I’ll take you in and we’ll do it together.”

Growing up as a Black woman in Cairo, Felder said she’s been mistreated, overlooked and has even had her intelligence questioned and insulted. The conclusion the Cairo High School graduate reached is that she has not been given the same opportunities as some of her peers.

“I often wonder how Grady would be if we had people of all races doing outstanding things right here in Cairo,” she said.

People have to learn to be kind to one another, Felder said, and that means eliminating harmful stereotypes by challenging popular misconceptions and treating others the way they’d want to be treated themselves.

If people can do that, Felder said the people of Grady County will be stronger and less divided.

Most importantly, Felder said meaningful changes can be achieved at the ballot box.

“Vote as if your life depends on it, because it does,” she said.

Felder ended the program by saying she hopes Saturday’s march won’t be the last in Cairo. The Albany State junior said she wants more events like Saturday’s, and encouraged attendees to follow “Unapologetically Black” on Facebook for further updates.

“We’re definitely going to keep moving forward,” Felder said. “We have a lot of plans that we want to see come through in Cairo, Georgia.”