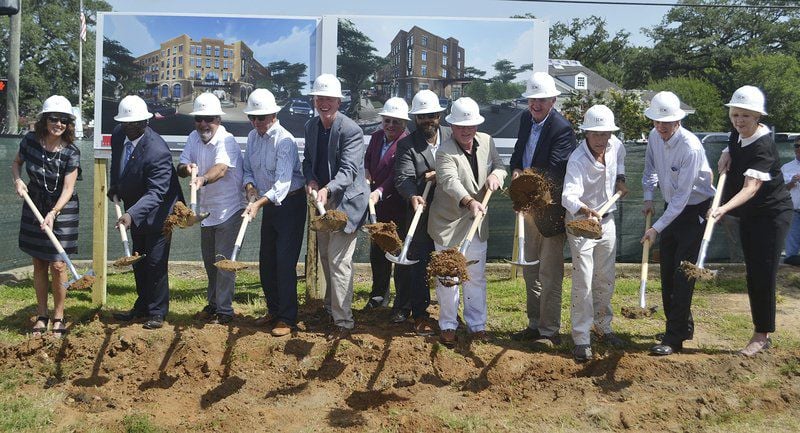 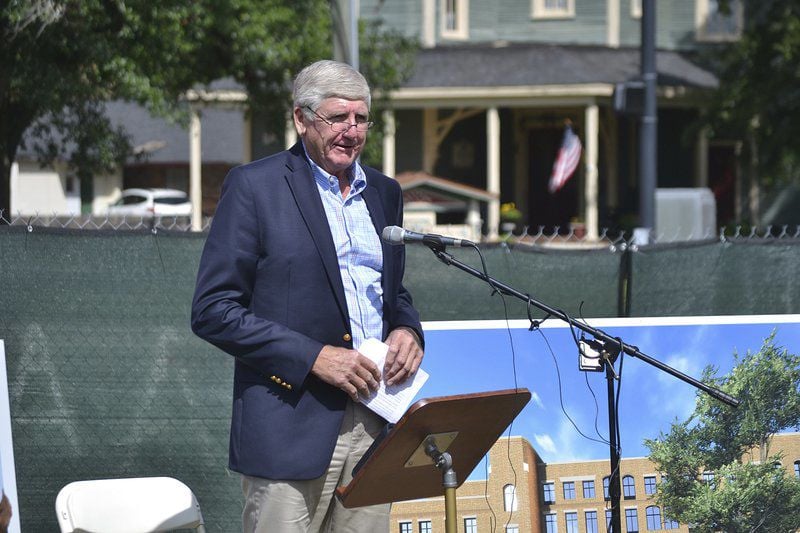 Pat Donahue/Times-EnterpriseThomas County Commissioner Mark NeSmith, who is also a Thomasville Payroll Development Authority member, speaks during Wednesday morning's groundbreaking ceremony on the impact the Courtyard by Marriott will have. 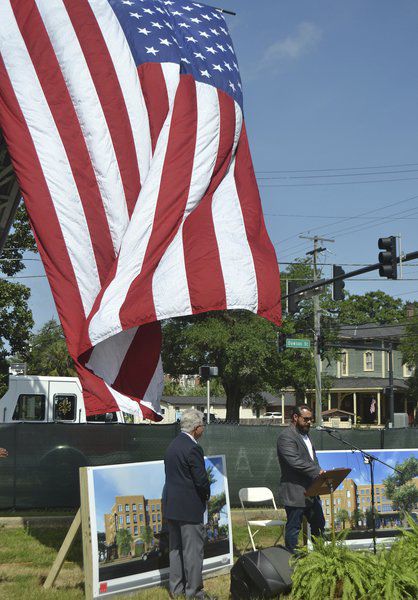 Pat Donahue/Times-EnterpriseJeremy Emmett of Southern Lodging address the crowd at Wednesday's groundbreaking for the Courtyard by Marriott, the first hotel to be built in downtown Thomasville in nearly a century.

Pat Donahue/Times-EnterpriseThomas County Commissioner Mark NeSmith, who is also a Thomasville Payroll Development Authority member, speaks during Wednesday morning's groundbreaking ceremony on the impact the Courtyard by Marriott will have.

Pat Donahue/Times-EnterpriseJeremy Emmett of Southern Lodging address the crowd at Wednesday's groundbreaking for the Courtyard by Marriott, the first hotel to be built in downtown Thomasville in nearly a century.

THOMASVILLE — A crowd braved swelteringly hot weather Wednesday morning to witness the groundbreaking ceremony for the first hotel to be built in downtown Thomasville in more than a century.

Ground was broken on a tract at South Dawson Street and Remington Avenue for a Courtyard by Marriott that will open in about a year.

"It's a great day in Thomas County for all the citizens," Mark NeSmith told the crowd.

NeSmith, co-chairman of the Thomasville Payroll Development (PDA) and a Thomas County commissioner, expressed appreciation to Marriott for choosing Thomasville as a hotel site.

In addition to providing a place for quality overnight lodging, the hotel will employ more than 50, NeSmith said, adding that the construction phase involves a $12 million investment.

The Marriott, he said, is expected to bring $3 million annually to the downtown Thomasville economy, pointing out tax dollars for the city school system and additional Thomasville Utilities revenue.

"The impact is going to be significant," NeSmith noted.

The hotel is a project of Southern Lodging, a Thomasville company.

"We have a lot of blood, sweat and tears in this project," said PDA Executive Director Shelley Zorn.

After assuming duties of her job, Zorn's first meeting was a public input event about a hotel on the site — property transferred in 2018 from the City of Thomasville to the PDA.

The hotel project, he said, is unique for the PDA, which is accustomed to dealing with industries.

The PDA listened for four months to passionate citizen input on a hotel selection, Cheney said. The PDA considered the Marriott the best project, he said.

"I have the easy task of thanking everyone," Allen said.

The hotel project is at the end of one journey and about to begin the journey of building, Allen said.

Jeremy Emmett, Southern Lodging chief operations officer, pointed out that new businesses are "popping up" in the city.

"People come come here to eat and shop — and eat," he said.

About Southern Lodging, Emmett said, "We all wanted to do what we thought was best for Thomasville."