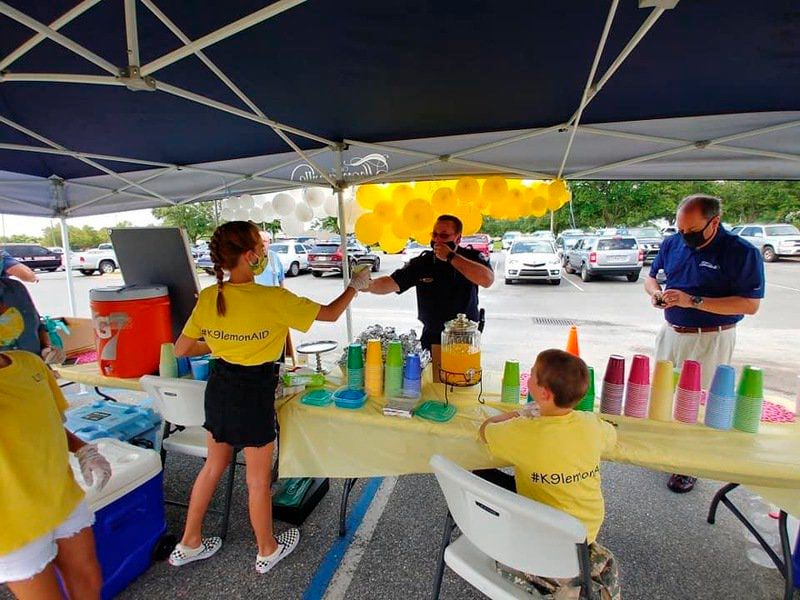 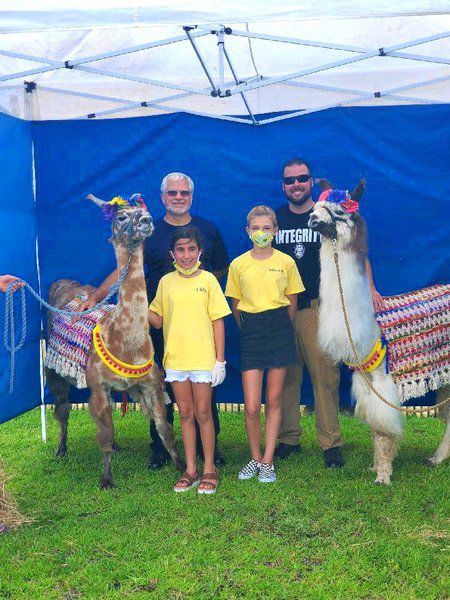 THOMASVILLE — The lemonade and hot dogs were sellouts, but people kept coming.

"It's hard to say 'no' to dogs," was event co-organizer Wimberly Jones' response when asked for a reaction to the fund drive's success.

Because of the unexpected amount of money raised, a better quality of ballistics vest will be sought for the K9s.

Some people drove through with their dogs at the event on Jail-Justice Center grounds.

"I don't think we could have done it without them," she added.

Police Chief Troy Rich paid more than the $1 charged for serving of lemonade. City Manager Alan Carson, next in line, made sure he paid more for his beverage than the chief paid.

"When I received a phone call from the girls Friday afternoon, and they told me the amount of money raised, I was overwhelmed," Rich said. "They had to repeat it to me several times, because I could not believe it. I want to thank the girls for their hard work on this project. They are the example of a tremendous caring heart. I also want to thank the community for the donations and all of the TPD volunteers who helped out."

The girls sold out of 25 gallons of lemonade and five gallons of Satsumade, the latter donated by Wimberly's grandfather, Kim Jones, and Florida Georgia Citrus.

As customers kept coming, the girls had no idea of how much money was being donated.

"We just knew it as a bunch," Wimberly said.

Lilly and Wimberly knew early they had met their goal, but they kept going. People continued to arrive after they ran out of beverages.

Dixon is proud of her daughter and Wimberly. They distributed posters and flyers and talked to people about the upcoming event.

"It was not about the girls," she said. "It was about those dogs the whole time."

Lilly and Wimberly raised $800 before the Friday event. They were "blown away" by the police department's support and that of the community as a whole, Jenna Jones said.

Money remaining after vests are purchased will go to the Animal Rescue Coalition and Androcles Society, both Thomas County organizations, and to Redemptive Love Farm at Miccosukee, Florida.

The K9s will be fitted for vests this week. Lilly and Wimberly will be present when the vests are presented to the K9s.

"The kids can do great things when the community shows up to support them," she said.

Services for Stamat Corky Sampson, 69 of Thomasville will be held Wednesday, November 25th at 11:00 AM at Victory Baptist Church. Rev. Gary Holland will officiate and interment will follow in Laurel Hill Cemetery. Mr. Sampson passed away on November 22nd at his residence. He was the son of t…

Services for Stamat Corky Sampson, 69 of Thomasville will be held Wednesday, November 25th at 11:00 at Victory Baptist Church. Rev. Gary Holland will officiate and interment will follow at Laurel Hill Cemetery. A visitation will be held Tuesday, November 24th at Allen and Allen Funeral Home …