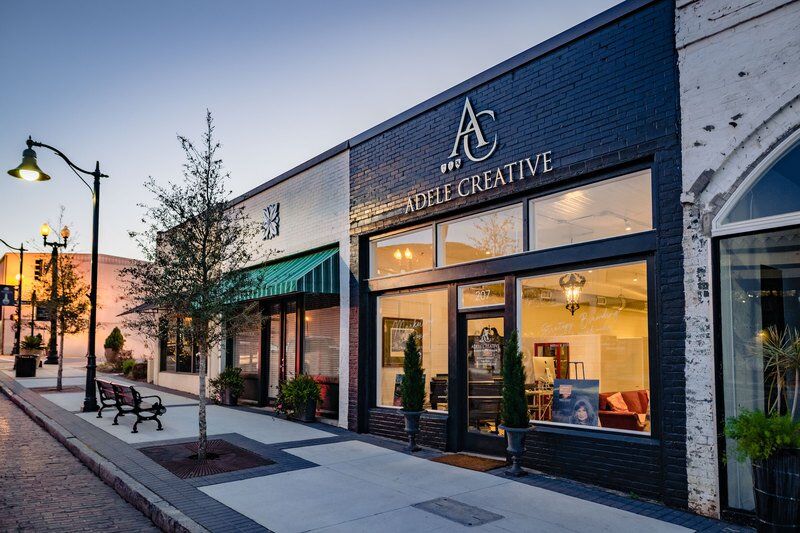 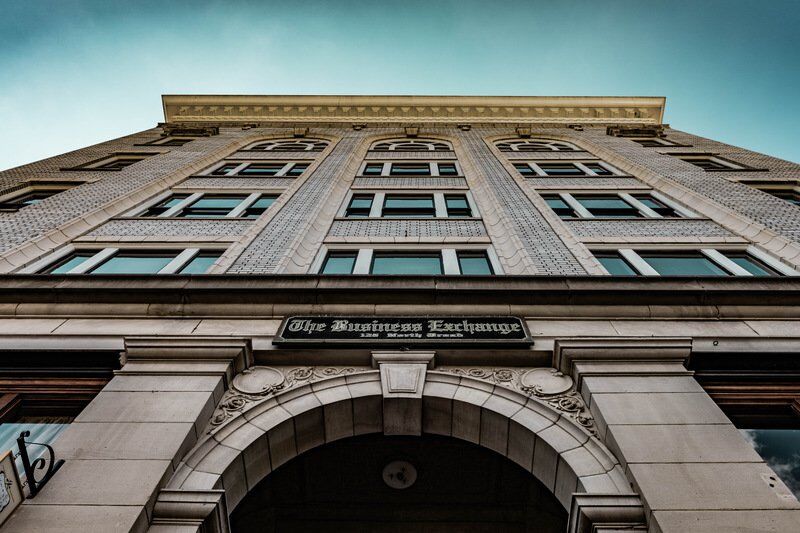 "Landmarks’ Award of Stewardship was created in 2002, and is given for the continuing long-term care of significant historic properties. This year, the Award of Stewardship recognizes Jimmie Freeman of the Broad Street Business Exchange and Lauren Vann of Adele Creative," said Nancy Tinker, Landmarks executive director.

The Upchurch Building, presently known as the Business Exchange, was constructed in 1915 by J.W. Upchurch as a five-story commercial building, becoming Thomasville’s tallest building. Described in early reports as “the city’s only skyscraper,” the building represents the rise of local commerce in the early years of the 20th century, Tinker said.

"Historically, the portion of West Jackson between Broad Street and the Seaboard Coastline Railroad was predominantly the city’s African American commercial district and was known as 'Sandy Bottom' because of its location at the bottom of the Broad Street ridge," Tinker said. "As West Jackson neared its intersection with Madison, upper West Jackson’s merchants became a mix of African American and Jewish business owners. As the 20th century progressed, West Jackson began to fill with one-story, attached commercial buildings. Facades often featured cast iron storefronts. Historically, 207 W. Jackson is best known as the home of Crawford’s Grocery & Market."

The Achievement Award for a Contributing Addition to the Community recognizes appropriate building additions and adaptive reuse strategies that broaden the use of historic buildings and their associated hard/landscapes, extending usefulness to present and future generations.

Tinker said historic commercial properties along East Jackson Street were constructed primarily between the late 1880s and the mid-1940s and are characterized by a series of modestly scaled one- and two-story masonry buildings. Over the years, the 139 East Jackson building owned by Vereen was home to many businesses — a grocery store, garage repair shop, the Thomasville Press newspaper and in 1985, Golden’s Restaurant and Cafeteria.

The building features elements dating from the Art Deco period. Working in partnership with architect Charles Olson, Vereen completely transformed the commercial building for residential use, dividing the interior into three distinct spaces – living, dining room/kitchen and bedroom that features a walk-in closet and bath. An exterior, private courtyard is immediately to the building’s rear.

"During the rehabilitation, the 1960s-era aluminum storefront was removed to reveal a Vitrolite Art Moderne storefront dating from the 1930s," Tinker said. "Today, Vitrolite is an obsolete building material with missing pieces obtained from a salvage dealer in St. Louis, Missouri. The building features the only surviving example of a Vitrolite storefront in downtown Thomasville.

The Award of Notable Achievement is given to projects with rehabilitation is respectful of the past and whose design approach retains original design elements, while incorporating modern enhancements that protects a property’s sense of time and place within the broader Thomasville community.

Recipients of the the Award of Notable Achievement are Holly Lybrook for 122 South Love St. and Dr. and Mrs. Craig Fredericks for 111 Watson St.

Constructed circa 1873, the Mattie L. Harris House is a wood-frame, gabled-ell Victorian residence. The dwelling had been abandoned for about 10 years before it was was acquired by architect Brandon Godwin, and renovations begun. The property was later acquired by Holly Lybrook, who worked closely with Godwin to remove an existing enclosed rear porch, allowing the design and construction of a 600-square-foot master suite. Where possible, original windows were retained with replacement windows designed to match the originals in size, material and profile.

Constructed circa 1950 for Boling and Connie Jones, the single-family residence at 111 Watson St. has been rehabilitated, allowing its continued use as a residential property.

Dr. and Mrs. Craig Fredericks worked closely with architect Bill Edwards to expand a small, original foyer creating a central hallway that accesses all points of the dwelling. Building rehabilitation includes reimagining the dwelling’s original kitchen and den spaces, expanding them for family and entertainment use. The landscape received attention with creation of an exterior courtyard and amenities to a pool house in the rear yard.

Landmarks’ Award of Outstanding Achievement recognizes preservation excellence and is given to those who undertake challenging rehabilitation programs that return significantly altered historic sites to their original appearance and traditional use.

The 2020 award recognizes Mr. and Mrs. Marty West for efforts on the John I. Parker House. The award also recognizes John, Lois and Mimi Hand for restoration of the Bryant-Hand Cottage.

Constructed circa 1850, as a Georgia Plain cottage, the John I. Parker House is one of several antebellum houses scattered throughout the Tockwotton-Love Place National Register Historic District. Divided into numerous apartments during the 1990s, the house was gutted by fire on January 10, 1998. The rehabilitation undertaken by Marty and Marcy West removed multiple one- and two-bedroom apartments, returning the house to its original floor plan and to its traditional use as a single-family residence. Where possible, rooms and ceiling heights have been returned to their original configurations. Plaster walls have been repaired and original heart pine flooring refinished.

Originally located at Clay and Broad streets, the Bryant-Hand Cottage was constructed for the Bryant family of Massachusetts sometime between 1841 and 1844. Designed in the Gulf Coast Cottage style, the house was designed by architect Benjamin F. Perham, who, through the property’s elaborate design, was determined to display his architectural ability to local citizens. In 1893, the property was relocated to Stevens Street, where it remained until it was relocated in 2018, by John Hand, who moved the house to its present South Hansell Street location.

In the restoration, Tinker said, every effort was made to use original materials or materials correct for the period and styling. Once relocated to South Hansell, a new foundation was erected, modeled on the original foundation’s height and configuration. Original foundation bricks were reused where possible. The house’s chimneys and roof were reconstructed with a rear gable-ell addition added to keep modern appliances and plumbing out of the original portion of the house. Missing trim was replicated and repaired while Hand created two new mantels, basing design upon existing moldings to replace missing interior mantels. The front porch was rebuilt based upon original handrail, pieces of which were found in the attic. The house’s Classical Revival façade retains its original paint that was mixed with finely ground glass or sand to create a faux-stone appearance.

The Phoenix Award was created in 2019, to recognize buildings or sites that have literally been brought back from what some might consider as having passed the point of no return, Tinker said.

Constructed in 1907, the Harding-Massey House was owned until 2018, by descendants of Sarah Annie Massey Floyd, Thomasville’s own “Miss Bulldog.” On Jan. 21, 2018, members of the Massey family gathered for a family celebration, placing a fire in the dining room fireplace. During the course of the evening, the flue became very hot igniting a fire in the attic. The fire was devastating, burning through the roof, leaving only the building’s exterior walls.

"The loss of the Harding-Massey House created development opportunity for tree-lined, historically cohesive East Jefferson Street," Tinker said. "Fearful the house would be razed and the lot cleared for incompatible new construction, Scott and Peggy Rich acquired the property, beginning the daunting task of salvaging and rebuilding."

Rehabilitation included the selected removal of interior walls to create more open living space, the redesign of the kitchen and creation of a first-floor master bath. Placement of two bedrooms, baths and a playroom in former attic space required raising the house’s original roofline by about two feet. Mantels, salvaged from the fire, were used to build the new living room mantle, heart pine flooring was refinished and a pocket door originally located between the dining and living rooms was salvaged, refinished and now is proudly displayed in the family’s den.

Services for Martyle Crosby Barwick, 80 of Thomasville will be held at 3:00 pm, Sunday, October 24, 2021 at Allen & Allen Celebration of Life Chapel. Pastor Steve Wooten will officiate and interment will follow at Barnett's Creek Cemetery. Mrs. Barwick passed away October 21st at Colquit…

Graveside services for Sandra (Sandi) Keller Peed, 78 of Thomasville will be held at 2:00 pm, Saturday, October 23, 2021 at Sunset Memorial Gardens. Mrs. Peed passed away October 20, 2021 at Archbold Hospital. Born October 4, 1943, she was the daughter of the late Elmer R. Keller and Jeannet…

Werner Wesley Waldron, 72, of Valdosta, passed away October 19, 2021. Memorial services will be held at 4pm on Thursday, October 28, 2021 at First Baptist Church. Visitation will be 1 hour prior to the service. Condolences may be conveyed online at www.mclanecares.com Carson McLane Funeral H…