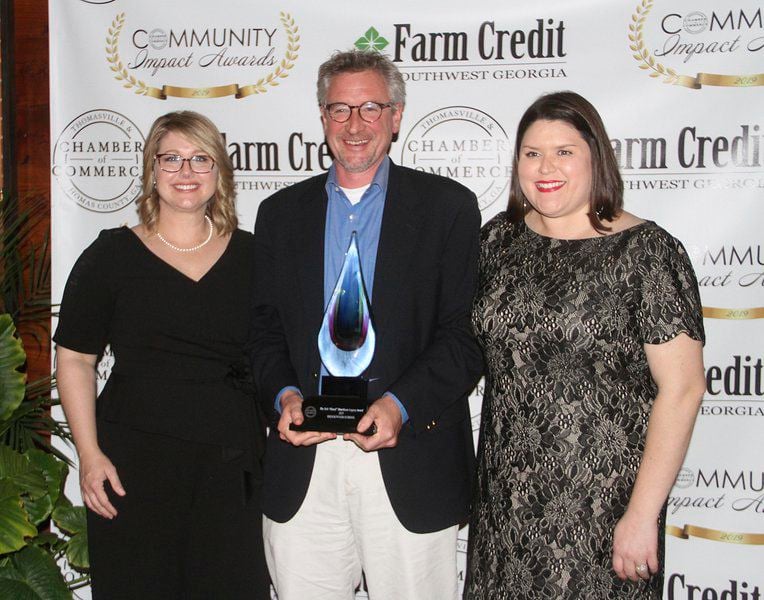 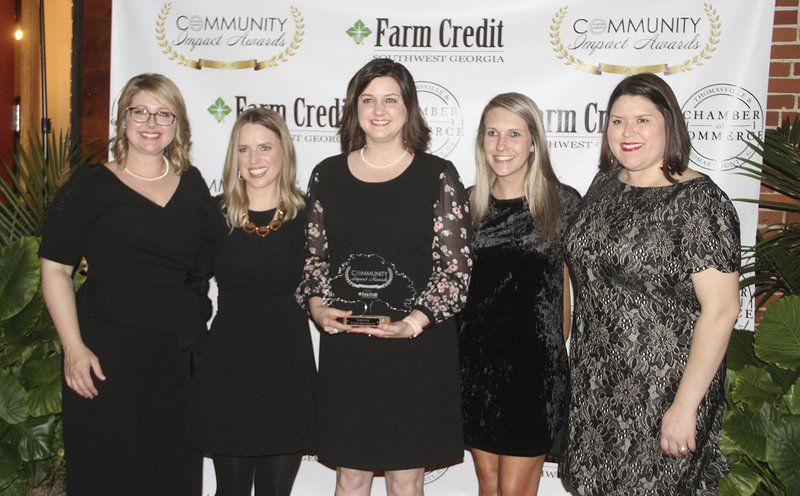 Pat Donahue/Times-EnterpriseThe Treehouse was named the Non Profit of the Year. 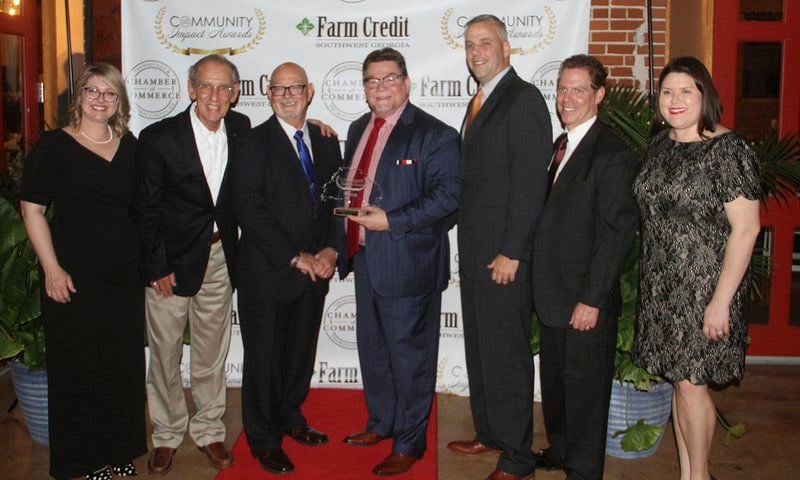 Pat Donahue/Times-EnterpriseCleaver Brooks was named the Manufacturer of the Year. 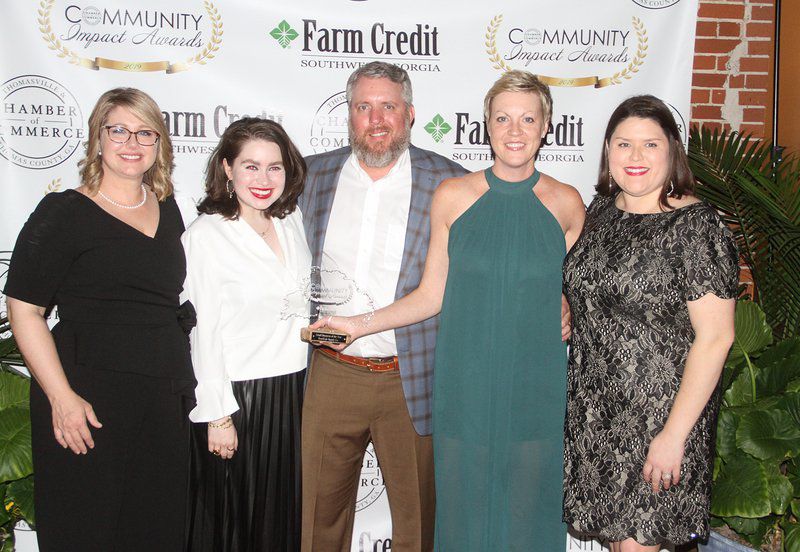 Pat Donahue/Times-EnterpriseSouth Life Supply Co. was named the Small Business of the Year. 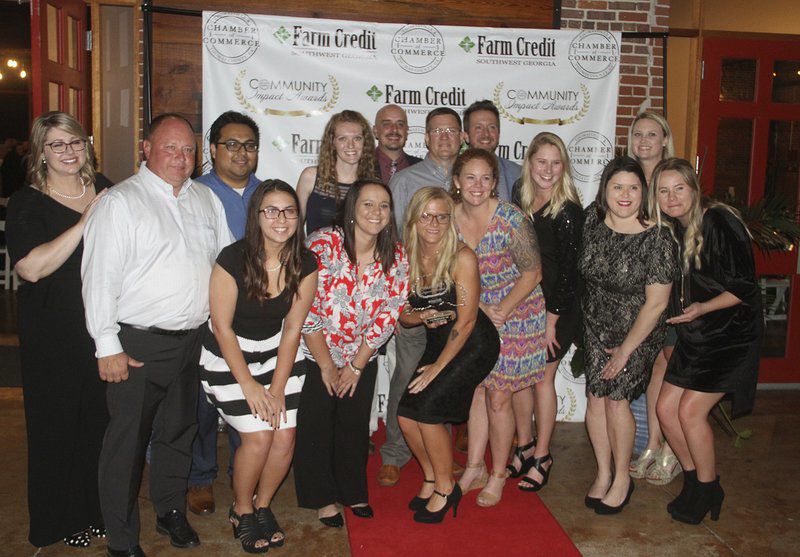 Pat Donahue/Times-EnterpriseNew Hire Solutions was named the Large Business of the Year. 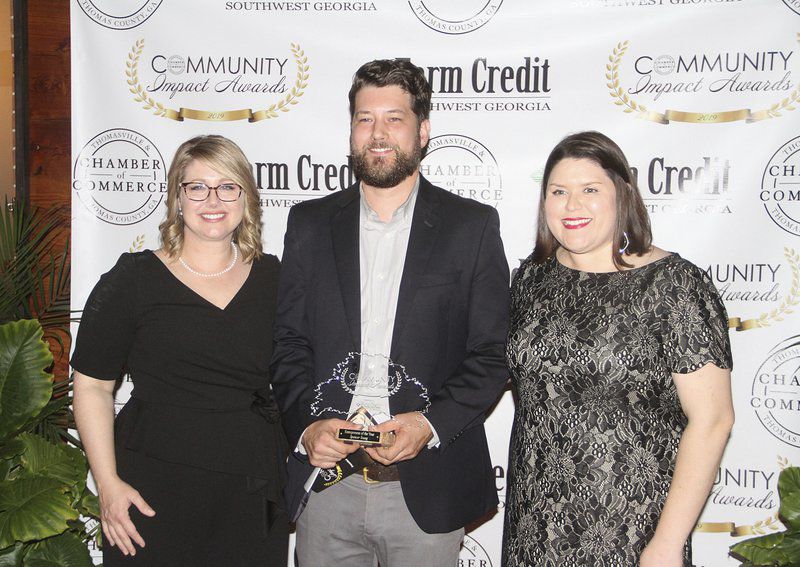 Pat Donahue/Times-EnterpriseSpencer Young of Grassroots Coffee was named the Entrepreneur of the Year. Alongside are Chamber Executive Director Andrea Collins, left, and Christina Reneau, Chamber director of marketing and public relations. 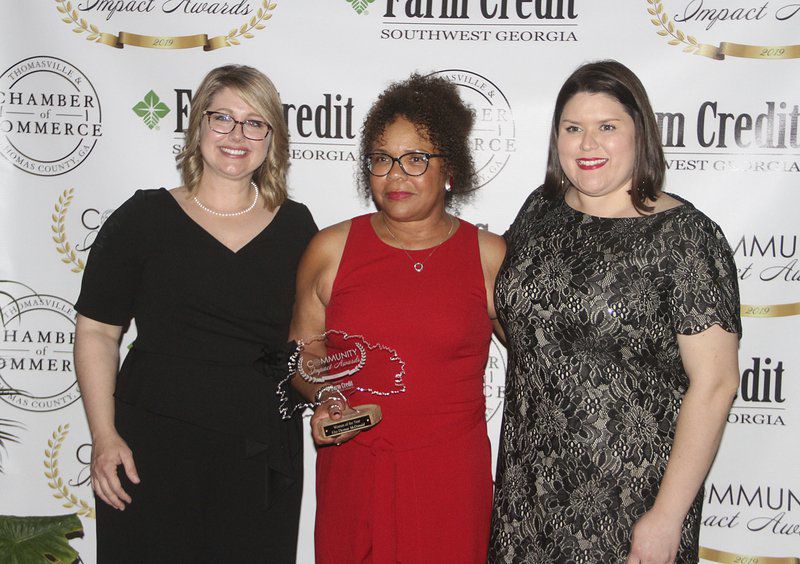 Pat Donahue/Times-EnterpriseThe Treehouse was named the Non Profit of the Year.

Pat Donahue/Times-EnterpriseCleaver Brooks was named the Manufacturer of the Year.

Pat Donahue/Times-EnterpriseSouth Life Supply Co. was named the Small Business of the Year.

Pat Donahue/Times-EnterpriseNew Hire Solutions was named the Large Business of the Year.

Pat Donahue/Times-EnterpriseSpencer Young of Grassroots Coffee was named the Entrepreneur of the Year. Alongside are Chamber Executive Director Andrea Collins, left, and Christina Reneau, Chamber director of marketing and public relations.

THOMASVILLE — Before a capacity crowd at The Biscuit Company, the Thomasville-Thomas County Chamber of Commerce presented its annual Impact Awards, honoring non-profits, businesses and people in the community.

Thomasville Assistant City Manager Kha McDonald was named the Woman of the Year, and the Bob “Hutch” Huchison Legacy Award went to Brookwood School, which is commemorating its 50th year.

McDonald, who has been with the city since 1988, received a standing ovation as she was presented with her award.

She said one of her professors at Northwestern University always told her to be prepared for the unexpected.

“I didn’t do that tonight,” she said.

McDonald also pointed out she has long said that Queen Latifah — who is in a movie currently being shot in Thomasville — should play her in her life story.

“If you see her in town, tell her I had this planned out long ago,’ she said.

McDonald said the last year has been difficult.

"There is no place like Thomasville. No place,” she said. “You cannot get the things you get here anyplace else. It is special place, a special community.”

Brookwood Headmaster Dr. Randy Watts said he helped write the scripts for his press box crew to read over the public address announce system during football games, a script that included a plug to vote for Brookwood for the award. And his crew included two officers of TC Federal Bank, which also was up for the award.

“So I sheepishly went up to Greg Eiford and asked if he would be willing to do this,” Watts said. “His response was touching and emblematic of Thomasville, and he said, ‘either way, we’d be winners.’”

Watts said in the independent school world there is something called the smart bomb test, that if a bomb came and took the school out of the community, would anyone notice.

“What I have been so proud about Brookwood is the intertwined relationships we have with the community," he said. "We are intentionally part of the broader community and we wouldn’t be who we are without that support and engagement from the rest of the community.”

"I’m proud of where we are and where we're going.”

SouthLife Supply started as a gift exchange between Kelly and Heather Abbott, with earnings made out of bullets after each had been laid off from their previous jobs.

“We tell everybody all the time we would not be where we are and would not be the company we are if we had not had the support of the community,” said Heather Abbott. “We are so blessed to be in this community.”

Larry Plank, CEO of New Hire Solutions, said he and his staff have a lot of fun at work.

“This is not something we do by ourselves,” he said.

Manufacturer of the Year went to Cleaver-Brooks, and The Treehouse, an advocacy organization for victims of child abuse and sexual assault, was named Non-Profit of the Year.

Jackla Lawson, executive director of the Treehouse, said the award also marked eight years since The Treehouse providing full service to Thomas County for children who allege abuse or are victims of violent crime.

The original bakery sold 500 loaves of bread its first day, CEO Ryals McMullian pointed out. Now, with the Thomasville bakery and nearly four dozen others across the country, it does $4 billion in sales annually.

“This is a big year for us with our centennial year this year,” McMullian said. “It’s been quite a road from that first bakery to 47 bakeries now. It’s a remarkable achievement. We’ve benefited from being in Thomasville. We thank Thomasville for all the support they’ve given us over the years. We owe a debt of gratitude to our 10,000 employees and all those who came before to make this a wonderful, wonderful organization.”

The Chamber marks its 100th year in two years, which McMullian lauded.

“It gives you an opportunity to reflect ton what people with passion can do when they join together and do something great,” he said.