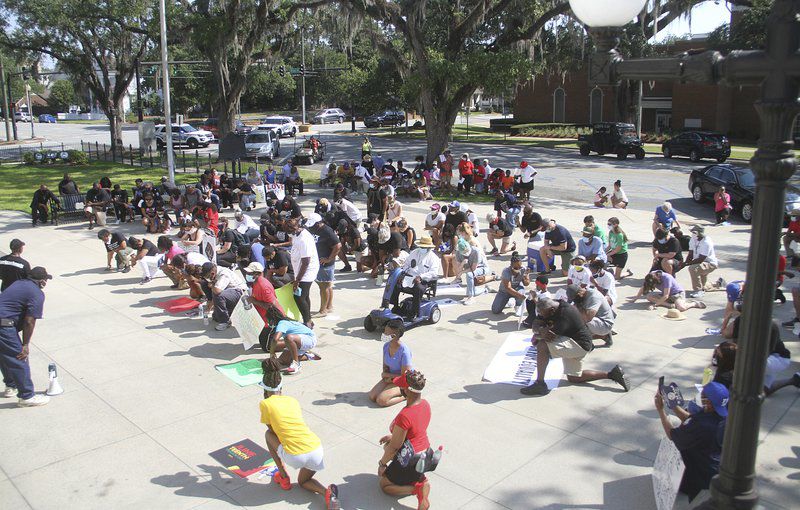 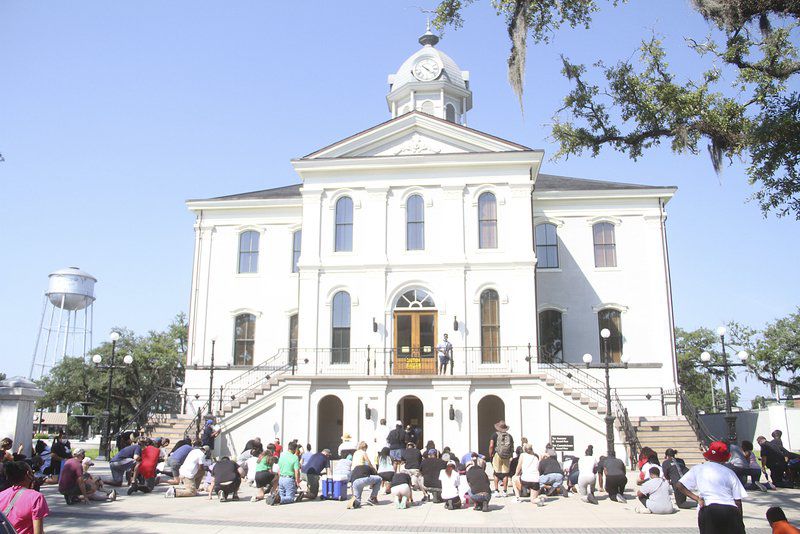 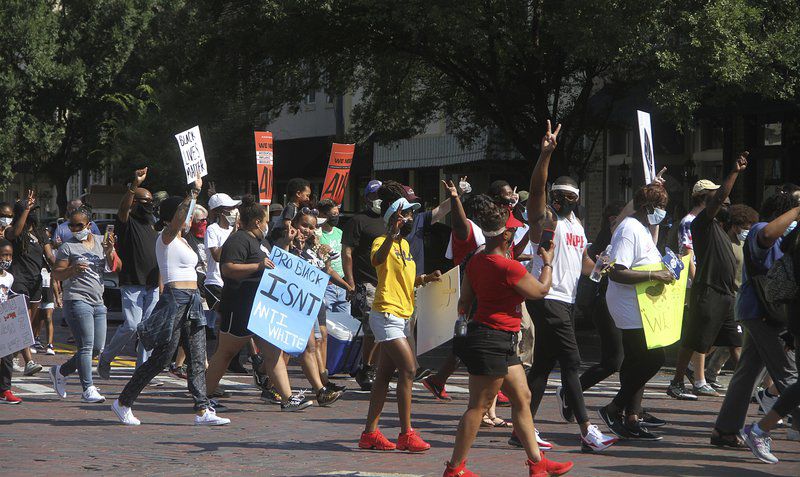 Pat Donahue/Times-EnterpriseMarchers made their way through downtown Saturday before finishing at the Ritz Amphitheater.

Pat Donahue/Times-EnterpriseMarchers made their way through downtown Saturday before finishing at the Ritz Amphitheater.

THOMASVILLE — A former Marine led a march for unity and social justice through Thomasville on Saturday morning.

With Thomasville native Johnny Higdon, more than 100 people walked down Broad Street to Jackson Street and then to Crawford and Remington before a final stop at the Ritz Amphitheater.

“This movement grew out of the racial injustice and movements happening across the country,” Higdon told the crowd at the Ritz. "A group of us veterans got tougher and thought about using our platform to bring about change.”

March participants stopped at the Thomas County Historic Courthouse and took a knee for 8 minutes and 46 seconds, the length of time former Minneapolis, Minnesota police officer Derek Chauvin had his knee on the neck of the late George Floyd.

“No one can handle this by themselves,” he said. "If this something we could have stopped years ago, we would have done it.”

Burns, who pointed out his journey started right off Pine Street, also called on people to speak out when they hear someone using derogatory language.

“When you hear your friends or relatives saying certain things, we’ve got to start standing up for each other,” he said. “Because if we keep letting it go, it’s going to continue and it’s going to be 100 years and we’re going to be right here.

“We have to start putting actions into our words.”

Rev. Jeremy Rich, a Thomas County commissioner and the pastor of First Missionary Baptist Church, acknowledged it was the actions taken 45 years ago by several Black leaders that helped him attain public office.

A lawsuit filed in 1975 against Thomas County opened the doors for African American representation on the board of commissioners, he said.

“We could never forget the sacrifice they made,” Rev. Rich said.

“We didn’t get here because we had the access to the right to vote. We also had to petition the federal government because of discriminatory practices.”

Rev. Rich and other speakers also urged residents to fill out the census and not only to register to vote but also put that power to vote to use.

Thomasville City Council member Wanda Warren discussed why she didn’t stand for the pledge of allegiance at a recent council meeting.

“I sat because for years, since I first started school, I’ve been saying the pledge of allegiance to this flag. One day I stopped and I listened to the words and I said, ‘I don’t believe those words anymore,’” she said, "because those words didn’t hold true for myself or for many people that I know in this country. Because until we get justice for everyone, there is no justice.”

Warren also said the change that needs to be made will be hard work.

Thomasville Police Chief Troy Rich said police departments across the country should have looked at their methods in the wake of what happened in Ferguson, Missouri six years ago.

Chief Rich said his department believes in procedural justice and uses fairness, an opportunity for a voice, transparency and impartiality.

“It is the institution of policing that is the problem,” he said, "and you need strong leadership to change cultures.”

Assistant Police Chief Eric Hampton pointed out there were about six Black officers on the force when he joined.

“Now we’ve got four shifts and we have at least five Black officers on each shift,” he said. “We are going to work with this community that we police fairly and that we don’t commit the offense of police brutality.”

Attendees also were encouraged to pay attention to the state Legislature’s work on HB 426, a proposed hate crimes bill. Georgia is one of only a handful of states without a hate crimes law on the books. An earlier hate crimes law, passed 20 years ago, was struck down by the state Supreme Court, as justices called it too vague.

Hidden said it was good to see whites taking part in earlier marches but his goal for this march, he said, was to “invite the other side of the railroad tracks, the community that’s underserved so we can have our voices heard.

"And I think that's what we accomplished today,” he said, “so we can have a seat at the table and bring about real change.”

Higdon also urged whites and others to listen to Blacks and what they're going through to understand them. He said the furor over removing the Aunt Jemima label is an example. The message that label represented, he said, was the best Blacks could do was to cook in a white person's kitchen.

He also exhorted Blacks to unite and to pool their economic resources.

Rev. Rich pled for more investment in the Black community, such as Weston Park, also called upon the crowd to get involved and start seeking spots on local government-appointed boards and councils.