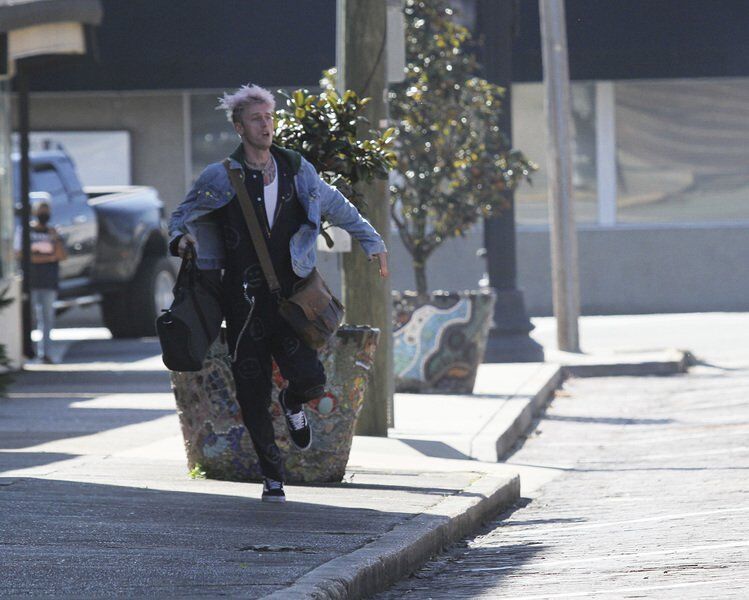 Pat Donahue/Times-EnterpriseMachine Gun Kelly runs down Remington Avenue during a scene for "One Way," now in production in Thomasville. 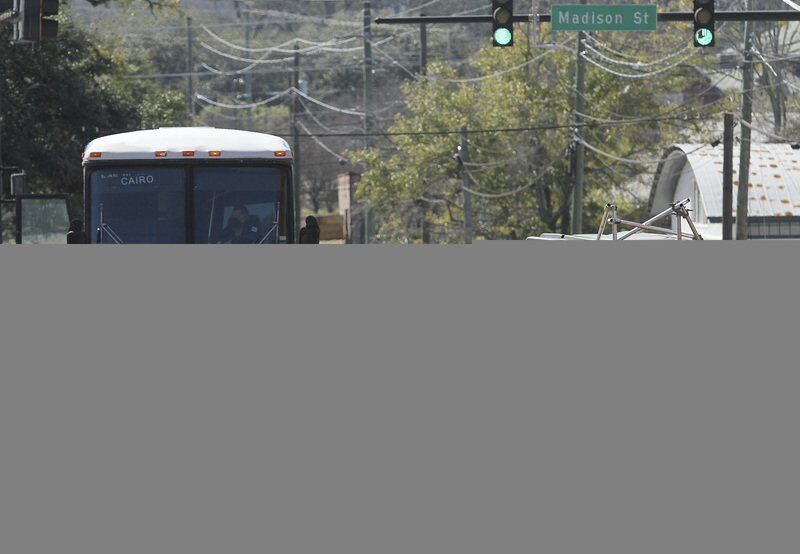 Pat Donahue/Times-EnterpriseCrews prepare to shoot a scene Monday for the movie "One Way."

Pat Donahue/Times-EnterpriseMachine Gun Kelly runs down Remington Avenue during a scene for "One Way," now in production in Thomasville.

Pat Donahue/Times-EnterpriseCrews prepare to shoot a scene Monday for the movie "One Way."

THOMASVILLE — The stars are out on the Thomasville streets.

Thomasville’s Pictures is filming its latest production, “One Way,” in and around Thomasville, and onlookers were treated to the sights of singer and actor Machine Gun Kelly in a couple of outdoor scenes Monday.

“Our goal is to bring production to southwest Georgia,” said producer Ryan Smith. “We’re really, really excited to do that.”

Smith said he and executive producer Allen Cheney, a Thomasville native, have been working for several years on bringing movie making to the Rose City.

Their first movie, “Tiger Rising,” wrapped shooting two days before Christmas in 2019. The COVID-19 pandemic brought the movie industry to a halt.

“When we had the ability to jump on board this film, we were really excited,” Smith said. “There’s a lot of people out of work in our industry. One of the things I’ve noticed, people are at least back to work here. Places are open, stores are open. But film has been slower to come back.”

There are two big factors in Thomasville’s favor, Smith said, when it comes to bringing moviemaking to the city. First and foremost is Thomasville’s hospitality and warmth.

“It’s such an amazing place,” Smith said. “The level of amazing food, drink, coffee, stores, local vendors, it’s that quaint ‘greatest town in America feel’ that translates to crew and cast members when they come.”

The production is employing 119 people, which Smith said is one of the project’s greatest benefits.

“It's a huge help to have locations, friendly vendors, support from the city, everyone from the fire department to the police department, everyone is so helpful to us and that enables us to drive dollars into the economy,” he said. “Thomasville is a beautiful and diverse city. It’s exciting to share all parts of that visually on screen through films.”

Smith, who has a film financing company Streamline Global, also lauded Georgia’s film tax credit program. The film tax credits are seen as being largely responsible for the state’s booming growth in TV and movie production.

“That’s a huge part of allowing us the opportunity,” he said. “We’re creating a secondary film market outside of Atlanta, another market that is not Atlanta.”

One difference, as a result of COVID-19, is keeping the cast and crew closer to the set. With “Tiger Rising,” producers encouraged those involved in the movie to get out into the community.

Shooting this movie — which also stars Travis Fimmel and Kevin Bacon — is different this time around, though. Cast and crew have to have two negative COVID-19 tests and quarantine for 48 hours.

Because of the pandemic, all the filming will take place in Thomasville.

It’s also a tight shooting scheduled for Thomasville Pictures’ newest venture. Movies routinely take three months of work on set. “One Way” is being in shot in three weeks to limit the time and exposure of cast and crew.

Welcome to film making in the age of COVID-19.

“We’re packing a lot of punch for such a short shoot,” Smith said.

Producers have partnered with Dr. Martha Ward and her team to test the crew every day and establish a COVID-conscious film set, he added.

“There is a lot of planning and protocols to make sure everyone is safe on set,” Smith said.

Shooting the movie began February 1, and Smith praised the work of Machine Gun Kelly, whose given name is Colson Baker.

“Colson is amazing to work with. He is a brilliant actor, aside from his musical career,” Smith said. “He’s a hard worker and such a creative talent on screen that it brings this project to an entirely new level.”

Once shooting is done, the movie will head to Ireland for post-production work. The goal, Smith said, is to have it ready for audiences in early 2022.

In the meantime, he and Cheney are planning on more movies to be shot in Thomasville.

“In a perfect world, we’ll be back July 1 to start our next movie,” Smith said. "Our goal is that any of the projects we finance we would love to bring here because it’s home.

“The goal is to keep them coming.”