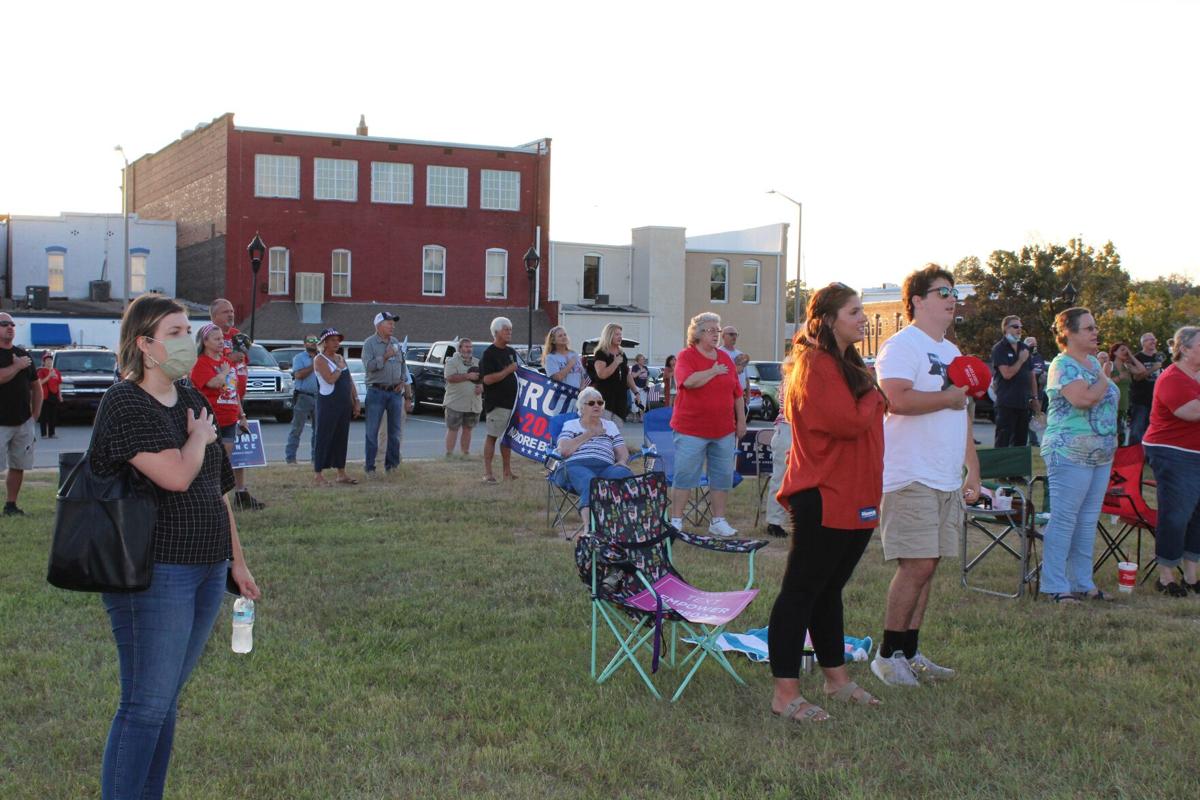 Erik Yabor/Times EnterpriseTrump supporters stand for the pledge of allegiance 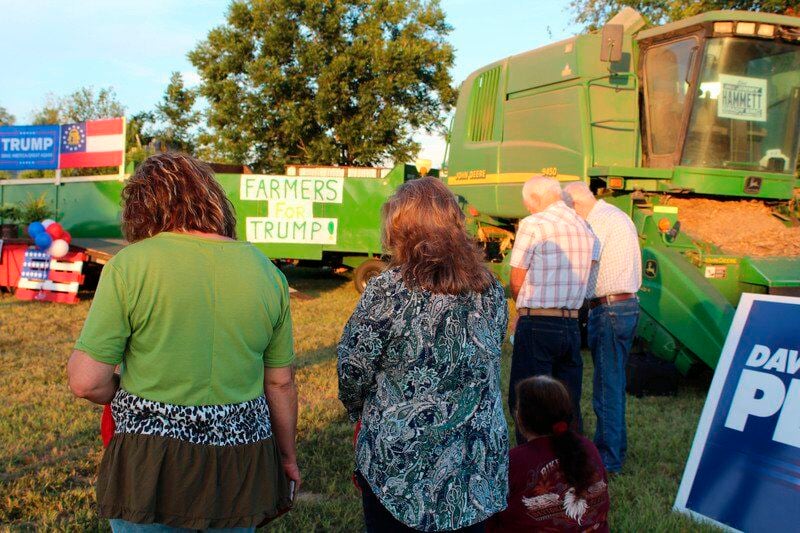 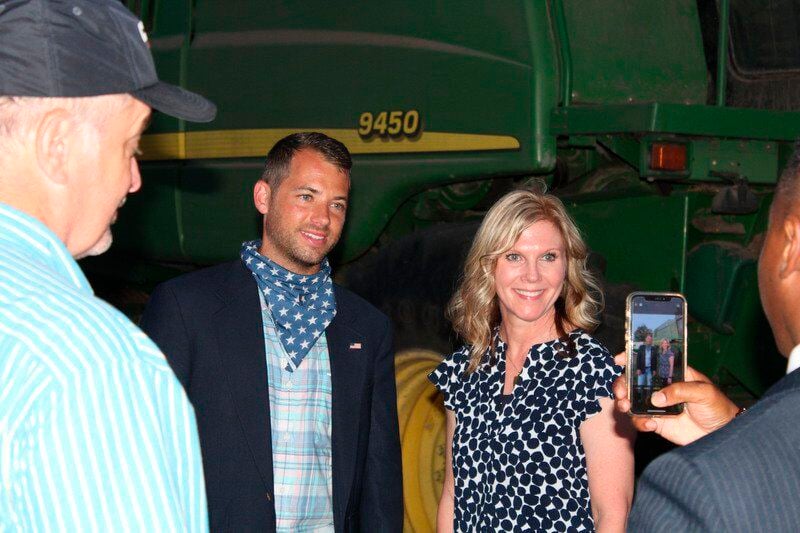 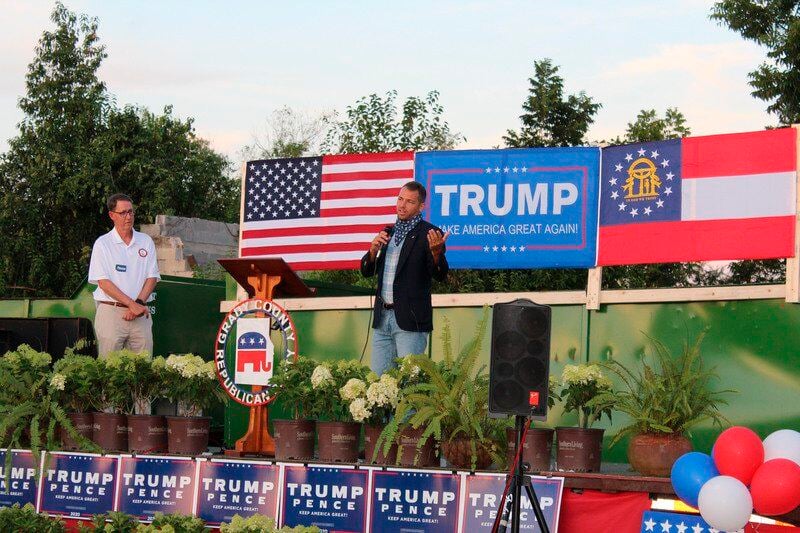 Erik Yabor/Times EnterpriseTrump supporters stand for the pledge of allegiance

CAIRO — Standing in front of a massive agricultural vehicle with a sign that read “Farmers For Trump,” a senior advisor to President Donald Trump told a crowd of the president’s supporters that they were sitting in the heartland of “God’s country.”

“If you believe that America is beautiful, that this is the land of opportunity, the land of heroes, you’re in the right place,” said John Pence, senior advisor to Trump’s reelection campaign.

Seated in folding chairs and picnic blankets, the crowd of more than 100 Trump supporters present Wednesday night sporadically broke into chants of “four more years” as Pence and other speakers throughout the night argued why the president deserved a second term.

“The Syrupmakers get it,” Pence said. “You put America first for every American, you’re going to have results.”

Under Trump, the Republican Party has solidified itself as the “party of freedom,” Pence said, standing up for core American values including the freedoms of religion, speech, commerce, education and fighting back against abortion.

“We are the party that stands up for freedom at home and abroad,” he said. “Democrats? They’re now just the party of free.”

Pence excoriated Democrats for policies he dubbed “free college” and “free healthcare for anyone that steps foot in this country” and the Green New Deal, which he said would devastate the American economy.

Nothing is actually free, Pence said.

“The free stuff is just the bait,” he said. “The hook? It’s control. Democrats’ agenda is based on government control.”

Pence quoted his uncle, Vice President Mike Pence, in saying that the Republican Party’s agenda is “based on freedom.”

Trump has defended freedoms by appointing more than 200 conservative judges to the federal bench, Pence said, and the administration is aiming to reach 300 by the end of the year.

Freedoms are also defended by standing by the police, Pence said.

In fighting the coronavirus pandemic, the Trump administration has brought leadership and an “all-America” response, Pence said, and the president is not hesitating to use authority in invoking the Defense Production Act and working with state governments.

At the top of Trump’s second term agenda would be goals of adding jobs and eradicating COVID-19, Pence said. Pence cited Operation Warpspeed, which he described as “an incredible feat” to mobilize the U.S. military to help distribute a safe coronavirus vaccine on a mass scale once it is made available.

One of the president’s other main goals has been to “buy American and hire American,” and Pence said that strategy has paid dividends in Georgia, citing the United States-Mexico-Canada Agreement.

In contrast, Pence said Joe Biden, Trump’s opponent in the November election, voted for the North American Free Trade Agreement, the forerunner to the USMCA, and supported normalizing relationships with China.

Now the time has come for voters to stand up for Trump, Pence said.

Mail-in ballots for the November 3 election go out September 15 in Georgia, and volunteers with the Trump campaign in the state have already completed more than 5 million phone calls and knocked on more than 740,000 doors.

“I came here to thank folks in Cairo for doing the hard work of campaigning,” Pence said.

Even in the midst of a global pandemic, Pence said campaign volunteers across the country are knocking on an average of more than 1 million doors each week, and are on pace to contact their 100 millionth voter by the end of next week.

“We’re in uncharted territory because of the enthusiasm and motivation like we see here in Cairo,” Pence said. “It’s unprecedented.”

The senior advisor ended his speech with a call for those in attendance to remain committed to the election — now less than two months away.

“Freedom is up for a vote in 54 days,” Pence said. “We can choose freedom for four more years, or we can choose something, in the words of Joe Biden, that fundamentally transforms America.

Pence encouraged those in attendance to continue involving themselves in the campaign.

“Let’s go get it for America, for the Syrupmakers, for Cairo,” Pence said. “Let’s go do it for the God-loving nation that we are.

“With God’s help, with a president that’s fighting for every single American by putting America first, I have no doubt that the best is yet to come.”

Though Pence’s time in Cairo was limited, and a planned visit to Mr. Chick was scrapped due to a lack of time, the senior advisor spoke warmly of the Syrup City.

“This is the heart and soul of America,” he said. “You often hear about the ‘flyover states’ as Hollywood elites and east coast elites talk about it, but we all know that it is those who work in the fields, plow the fields and the farmers like in this community that feed America and are so essential and really are why this is really a beautiful country and a great country.”

Introducing Pence was state Sen. Dean Burke, who warned that dire consequences would come if Trump is not reelected this fall.

“Our democracy is not something that we can take for granted,” Burke said. “We are on the cusp of losing everything that we hold dear, and the only thing that we have going for us is us.”

Also speaking at the event was state Rep. Darlene Taylor, Burke’s colleague in the Georgia legislature, and Jayme Bowen, a 35-week pregnant woman who grew up in a conservative, multiracial family. Sporting a shirt that read “Unborn Black Lives Matter,” Bowen said Trump’s stance on abortion was a key reason why she was voting for the president to take on a second term.

“You know, the liberals will talk about how black lives matter, but President Trump has put words into action by exposing abortion mills like Planned Parenthood for the racist abortion mills that they are,” she said.

“I’m telling you — white, brown, black babies — they’re all counting on us this November.”

“If you’ve all seen the boat parades, we’re going to do the south Georgia version of that,” said Brandon Phillips, chairman of the Georgia Republican Party’s 2nd District.