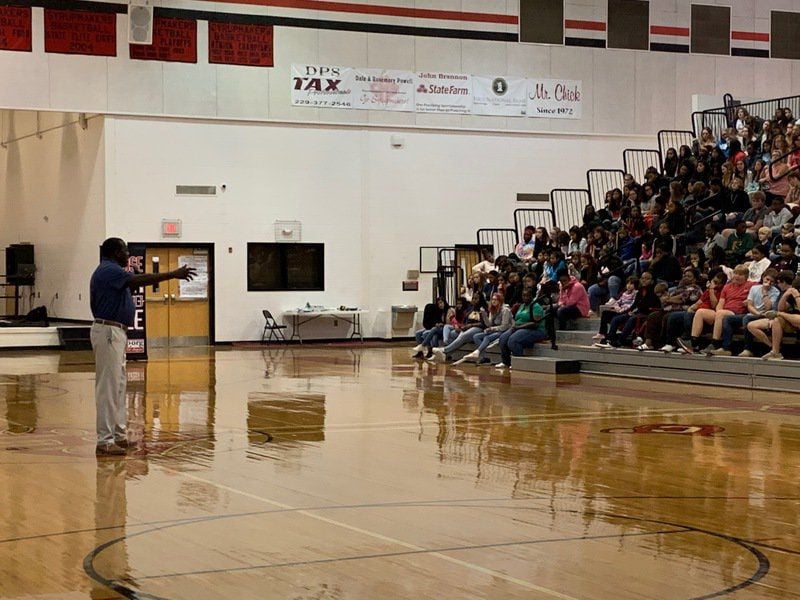 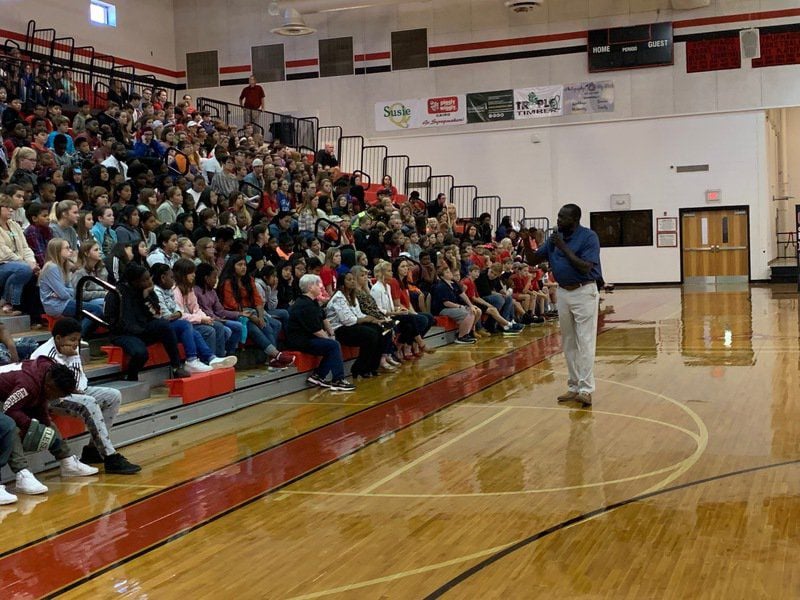 Erik Yabor/Times-EnterpriseChris Sheffield encouraged students to stay away from drugs. "I became incapable of exercising the talents that God had given me in any shape, form or fashion because of the reputation that I developed through my addiction," he said. 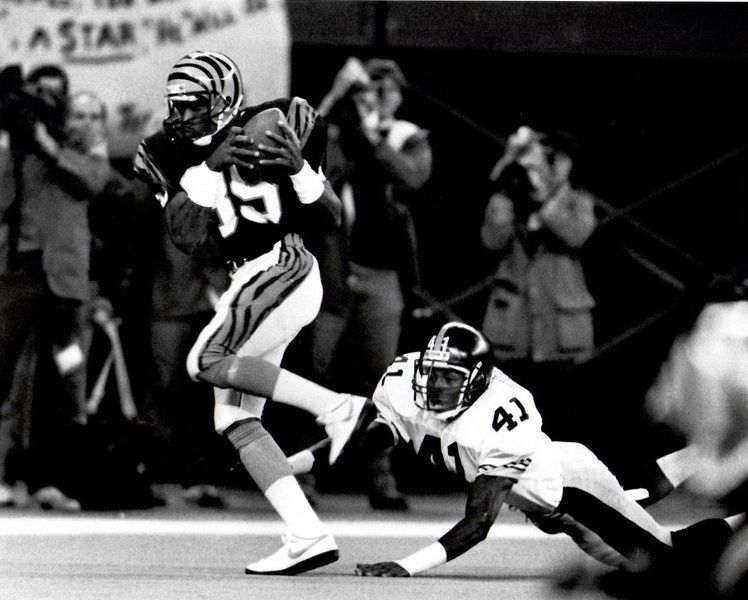 Submitted photoChris Sheffield, right, played 21 games in the NFL for the Pittsburgh Steelers and Detroit Lions

Erik Yabor/Times-EnterpriseChris Sheffield encouraged students to stay away from drugs. "I became incapable of exercising the talents that God had given me in any shape, form or fashion because of the reputation that I developed through my addiction," he said.

Submitted photoChris Sheffield, right, played 21 games in the NFL for the Pittsburgh Steelers and Detroit Lions

CAIRO — After more than 10 years of struggling with addiction, Chris Sheffield wants to help others.

Now a certified addictions counselor with Georgia Pines, Sheffield, a former Cairo High School quarterback who later had what may have been a promising NFL career derailed by addiction, is looking to leave a positive impact.

Sheffield, who played for the Syrupmakers between 1977 and 1981 and later appeared in 21 games as a defensive back for the Pittsburgh Steelers and Detroit Lions between 1986 and 1988, returned to his former high school for the first time in nearly 40 years Monday to speak to students. His goal was to encourage students to focus their extracurricular activities on furthering their education rather than destructive behaviors that could see them throw away their lives.

"They have before them the opportunity to go and be anything they desire in life, and it all begins with disciplining yourself to obtaining your high school diploma," Sheffield said. "It opens the door to an entire world of continuous learning and continuous progression."

As a college player at Albany State, Sheffield was named first team all-conference in the Southern Intercollegiate Athletic Conference and a first team Division II black college all-American. He played in the Division II college all-star game in 1985, where he was first noticed by professional scouts.

In 1986, the Steelers offered Sheffield a chance to play for them.

Though he entered training camp his rookie year as an unknown, Sheffield locked down a position as the starting left corner by the end of summer. It was in that position where Sheffield played well until the following year's players' strike.

Crossing picket lines to play during the strike cost Sheffield his job with the Steelers, but he was quickly given another chance to play with Detroit. It was with the Lions, however, where Sheffield was first introduced to hard drugs.

The Lions were staying at a hotel in Atlanta for a season-ending game against the Falcons. It was in that hotel where Sheffield saw several of his teammates entering and exiting a particular room. To Sheffield's surprise, his teammates were using cocaine.

"Some of the players that I saw going in and out of that room were some pretty high-profile folk," Sheffield said.

Following a victory over Atlanta to conclude the season, the team returned to Detroit. That night, Sheffield went to a party where he again saw his teammates using drugs.

"It frightened me to death, some of the looks that they had, so I didn't do anything even though I was curious," he said.

Sheffield soon returned to Albany after the season concluded with two teammates who were locals. Together, the three men frequented clubs and experienced the town's night life, and Sheffield decided to try cocaine.

"From the first time I tried it, I was hooked," he said

After trying cocaine just once, Sheffield began seeking the drug at every opportunity. He became so consumed in his quest to get high that he stopped working out.

By the time he returned to training camp in the spring of 1988, Sheffield was underweight and out of shape. He was released by the Lions at the end of the summer, and his NFL career was over.

Sheffield's life quickly began spiraling out of control. In a matter of months he lost friendships and everything he had of material worth as everything became overshadowed by his addiction.

"My entire life was defined by football, so when I lost that privilege I turned to a depressive state and all I wanted to do was not feel the reality of my life, so I used," Sheffield said.

By 1989, not only was Sheffield out of the league, he didn't even have a place to live. Just two years removed from being a starter in the NFL, Sheffield was homeless. He spent most of the next several years in his college town of Albany, living in abandoned houses and feeding his addiction.

Over the next 10 years, Sheffield was incarcerated a number of times. He was finally hit with a serious sentence in 1996 for the sale of crack cocaine along with several other addiction-related charges.

Sheffield was paroled in 1998, having served slightly more than two years of a 10-year sentence. He came home to his mother, Luvenia Gee, in Cairo, who had been suffering from cancer for a number of years. When she died in May 1999, Sheffield was still active in his addiction.

It was his mother's death, however, that prompted Sheffield to salvage his life.

On Sept. 9, 1999, Sheffield walked into a treatment center and started his recovery.

Though he relapsed in 2010, Sheffield has otherwise remained clean since he walked into that treatment center 20 years ago. His biggest regret is that his mother wasn't alive to see his recovery.

"She died before I got a chance to get myself together so that she could see I was fulfilling the dreams that she always had for me," Sheffield said. "It really crushed her that I got hooked on drugs. She was torn to pieces by that."

Now nearly a decade removed from his last experience with drugs, Sheffield sees his own recovery as nothing short of a miracle.

"I'm a walking, living, breathing example that the worst of us can make a series of positive decisions and turn our entire lives around," he said.

In his return to CHS Monday morning, Sheffield told students that his dream at their age was to achieve greatness on the football field. Having lost the ability to play the sport he loved so much, Sheffield now has a goal of helping others avoid the obstacles he faced throughout his life.

Before leaving, Sheffield left the students with something to ponder.

"I threw my entire career away due to addiction and due to making some terrible choices," he said.

"All of your dreams, all of your desires and all that your family has invested in you to become the wonderful men and women that they love so much can all be thrown away with one poor decision."