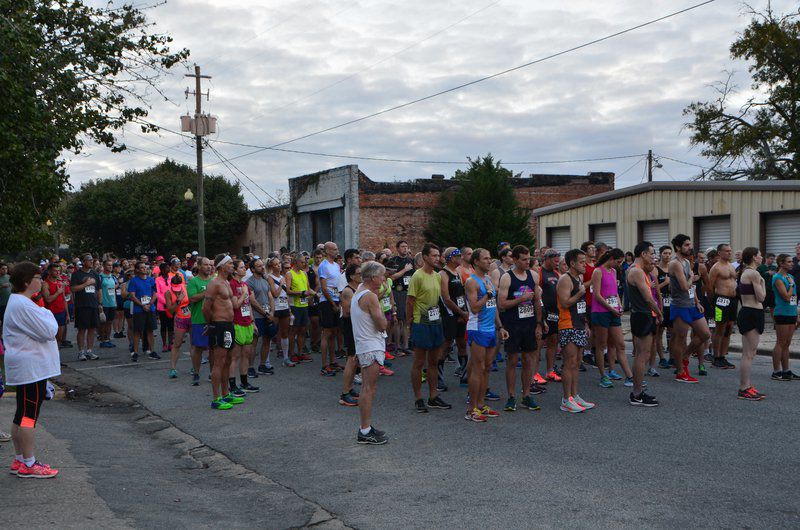 Photo by Elgin FreemanBoston Mini-Marathon runners listen to "The Star-Spangled Banner" before the 2018 race. 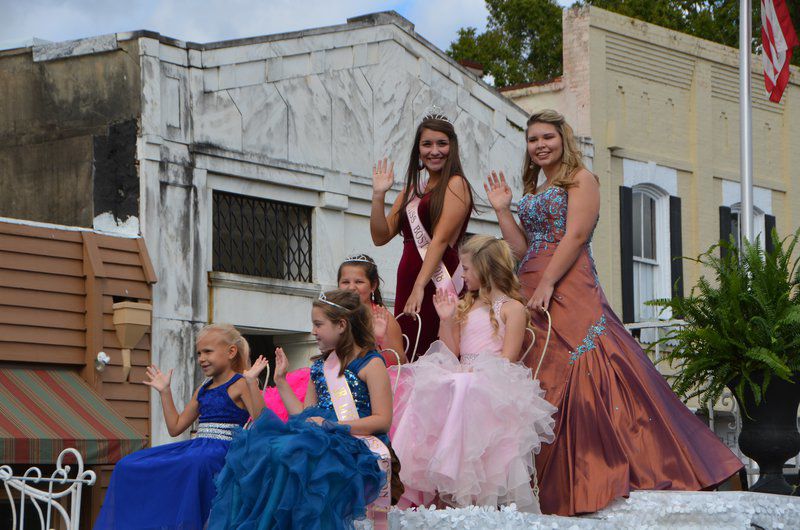 Photo by Elgin FreemanLast year's Miss Boston and her court were featured in the 2018 parade. 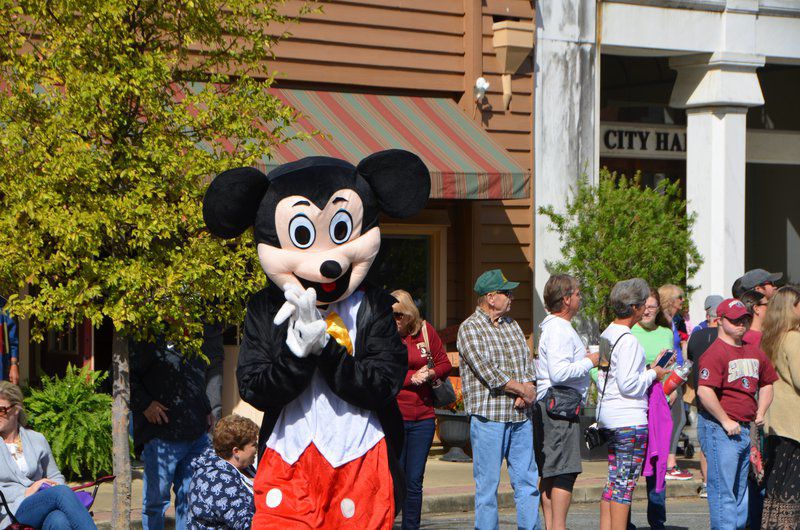 Photo by Elgin FreemanMickey Mouse took a break from Disney duties to attend the 2018 Boston parade.

Photo by Elgin FreemanBoston Mini-Marathon runners listen to "The Star-Spangled Banner" before the 2018 race.

Photo by Elgin FreemanLast year's Miss Boston and her court were featured in the 2018 parade.

Photo by Elgin FreemanMickey Mouse took a break from Disney duties to attend the 2018 Boston parade.

BOSTON — Many participants in the 40th annual Boston Mini-Marathon were not born when the inaugural event was held in 1979.

There was an interest in running in Boston, and a mini-marathon piqued the imagination of organizers. Robbins, Mark Lamon, Bobby Jackson, Jonathan Reiber and others were instrumental in organizing the event, laying out the course and directing the run. For years, the run has been part of the “Run and See Georgia Grand Prix” and part of the Gulf Winds circuit.

The festival grew around the run/walk event, creating a more family-friendly atmosphere.

The festival begins at 6 p.m. Friday, Oct. 25, when competitors sign in and set up for the Best BBQ Butt in Boston cook-off. Other vendors will set up as well, including food trucks in the parking lot at Synovus Bank. Local restaurants will be open.

Bleu Burden performs at 8 p.m. with traditional country and rock.

Activities on Saturday, Oct. 26, begin early. The run/walk events begin at 8 a.m., after the presentation of “The Star-Spangled Banner” by Rick McDonnell. Participants check in on Main Street.

“If you have not pre-registered, however, we do offer registration beginning at 6 a.m. at the Boston Community Center on Main Street,” he said.

Arts and crafts vendors offering a wide selection of handmade and homemade items reminiscent of offerings in the past will be set up along Pear Street. Handmade candles, handmade jewelry, Christmas and other seasonal décor, original art, cards and prints and woodcrafts will be for sale. Keelan Kirkland will be set up with his artwork and expects a visit from Uncle Jesse and Bo from “Dukes of Hazzard,” with the General Lee on hand.

New this year is the Kids Karnival on the east side of 100 block of Main Street. Amanda Maxwell, festival co-chairman, said the Karnival offers activities free to children 12 and under, accompanied by a parent or guardian.

“We’re especially excited that the Sea Mobile, Gulf Specimen Marine Laboratory’s traveling exhibit, will be on hand,” Maxwell said. “It holds 450 gallons of saltwater aquariums, including five touch tanks with starfish, sea urchins, conchs, crabs, sponges and a variety of other interesting and colorful sea life from the Gulf of Mexico.”

A petting zoo from Fifth Day Farm and a bouncy house are among activities. Other activities include face-painting, decorating mini-pumpkins, painting rocks and more. More information is available by calling 229-498-1146.

All-day activities at the Boston Fire Department include safety education, first aid, 911 and fire. The Occupant Protection Mobile Unit will be on hand. Available through a grant from the Governor’s Office of Highway Safety and the National Highway Traffic Safety Administration, the Camden County Sheriff’s Office provides the unit in an effort to increase proper seat belt restraint usage and reduce street and highway fatalities.

Live entertainment will be offered in two locations this year.

“We’re excited to offer a wide variety of entertainment, including a Get Up challenge,” said Ann McCrickard, entertainment chairman.

The stage setup at Jefferson and Main Streets will feature Robert Smith & Company, a family band and vocalist, line dancers with audience participation. Keelan Kirkland will sing, and a juggler will dazzle, along with a special performance by The Dance Academy. Another entertainer is Cookie Guyton and “Love in Action” singing gospel and spiritual acapella.

Story-telling is at 9 a.m. at Watt Park by local residents, who will share stories of “yesteryear” and growing up in Boston.

At 10:30 a.m., Watt Park becomes a gathering place for ghosts and goblins as children line up to be judged in Halloween costumes. To compete, go in costume to Watt Park by 10:30.

“Young and old alike are invited to participate in the fun,” said Patti Woods, costume coordinator. “Judged by age groups, the competition is friendly, and all participants get prizes. There will be some spook-tacular costumes.”

An awards ceremony at 11 a.m. at Watt Park recognizes winners from the run/walk events.  Race winners will be announced, and trophies will be awarded. The person with the best time in the half-marathon wins a cash prize.

At 11:30 a.m., the parade begins on Main Street, with special seating for those who signed on early as sponsors. Thomas County Sheriff Carlton Powell is parade marshal. Honorary parade marshals include organizers and directors from 1979 through today and the newly-crowned Miss Boston, Courtlen McCullers, and her court. Floats and festival queens from surrounding communities, the Thomas County Central High School marching band, equestrian units, classic Mustangs and other classic vehicles will be in the parade. There is no fee to enter, but pre-registration is required. Forms are available on the website or by calling (229) 498-1146.

At noon, the Thomas University Jazz Ensemble, under the direction of Dr. Karl Barton, takes the stage in Watt Park. The program will range from traditional jazz and funk fusion with a touch of rock ‘n’ roll.

Justin Schools, a one-man band from Hahira, follows from 2 to 4 p.m., with a break at 3 p.m. when cook-off winners are announced.

At 1 p.m., a multi-media presentation of the history of Boston in the Boston Community Center glances back at Boston from its beginnings as a stagecoach stop in 1837, through the virtual re-location of the town in the mid-19th century, its boom as an agricultural shipping point in the first part of the 20th century, to its place now as a rural town of historic interest and on the National Historic Register. Nancy Hoffman coordinates the feature.

The second annual “Tour de Boston,” a family event open to bicyclists of all ages, begins and ends at Watt Park. Margaret Cook leads the ride, which will leave at 2 p.m., travel through downtown into picturesque countryside and back. There is no fee for the event, but pre-registration is required. Forms, available on the website, may be be submitted at the event. More information is available by calling Amanda Maxwell at (229) 403-1365.

Horseback riders will meet at Stephens Street Sports Complex at 10:30 if participating in the parade or 12:15 p.m. for lunch and ride out at 2:30 p.m. Negative Coggins required. There is a fee for the event. Registration forms are available at www.bostonga.com or by calling Julie Christopher Lawrence at (229) 224-0020.

The mini-marathon and festival is sponsored by the Boston Community Club.