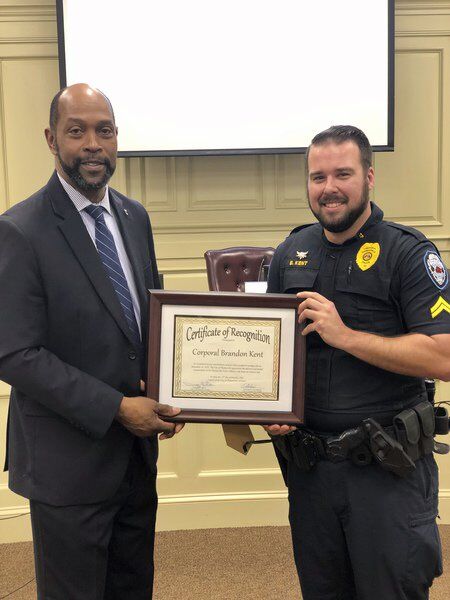 Photo provided by the City of ThomasvilleMayor Greg Hobbs presents a Certificate of Recognition to Cpl. Brandon Kent at the Monday council meeting. Officer Jamil Gatlin could not attend the meeting because of illness in his family. 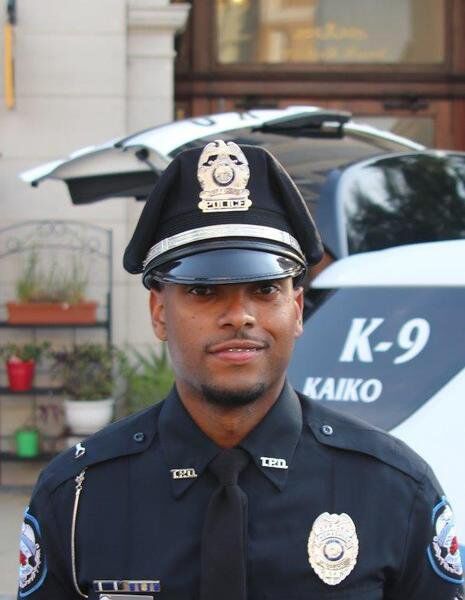 Photo provided by the City of ThomasvilleMayor Greg Hobbs presents a Certificate of Recognition to Cpl. Brandon Kent at the Monday council meeting. Officer Jamil Gatlin could not attend the meeting because of illness in his family.

THOMASVILLE — Two Thomasville Police Department officers are being recognized for saving the life of of a man threatening to jump from a railroad overpass.

The officers — Cpl. Brandon Kent and Jamil Gatlin — were recognized Monday by Thomasville City Council for bravery and dedication in persuading the man not to jump to his death from the South Hansell Street railroad overpass on the night of Sept. 14.

Cpl. Brandon Kent made contact with the man and used his training, life skills and empathy to persuade the man to let him help, telling the man that together they would find a solution to his troubles, said TPD Maj. Shane Harris.

Harris said the man told Kent he would jump when the officer left. Kent talked to the man for 30 minutes before Officer Jamil Gatlin joined the effort.

"Gatlin also spoke with genuine care while relating personal experiences with the man in an attempt for the man to open up so they could get him the help he needed. Eventually, the man agreed to go to the hospital with (officer) Gatlin and speak with a counselor," Harris said.

Police officers frequently deal with people in crisis threatening to harm themselves, buy threatening to jump from a railroad overpass is an uncommon occurrence, Kent said.

"He wouldn't ever tell us what the issue was," Kent said. "He would never open up to us."

Gatlin said he told the man, he, too, had experienced sadness in his life — "and I got through that."

"He said he had nothing to live for," Gatlin said, who accompanied the man to Archbold Memorial Hospital and walked in with him.

"I told him they were going to take care of him," Gatlin recalled.

The officer thinks that maybe the man's pride prevented him from seeking help.

Gatlin sat on railroad tracks with the man while they talked. He thought he was in a position to grab the man if he attempted to jump.

Had a train approached, Gatlin said he would have grabbed the man and dragged him off the tracks.

"Heroes do not have hidden motives and are defined by the moments in which they are called upon to act," Harris said. "I am proud to serve with the two young men of this police department who exemplified the characteristics of a hero."