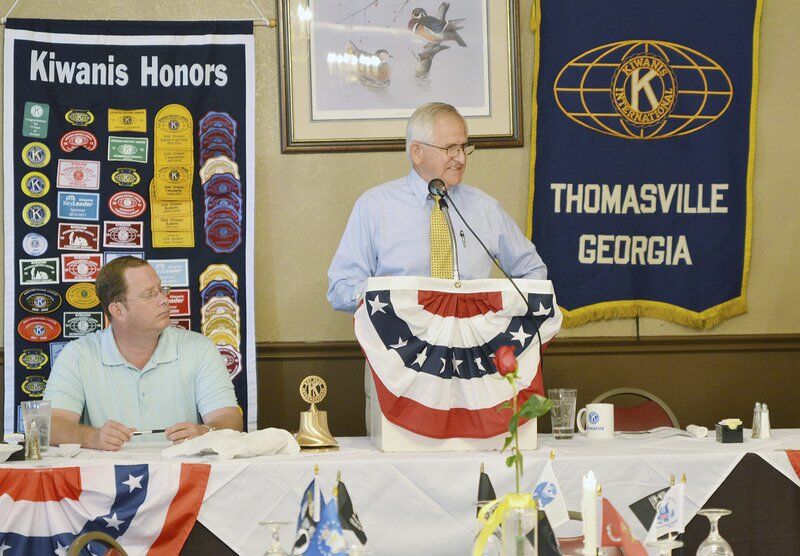 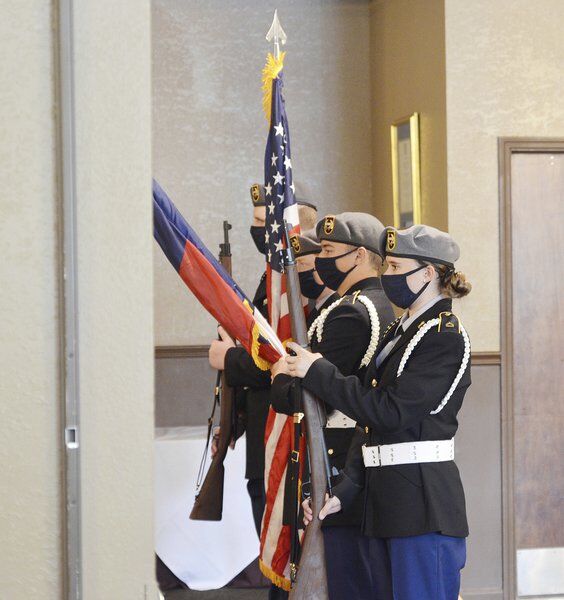 The Thomasville Kiwanis held its annual Veterans Day Observance 2020, at The Plaza recently with many veterans present and other guests. Veterans Day 2020 marks the 99th anniversary of the interment of a World War I unidentified soldier in the Tomb of the Unkown Soldier at Arlington Cemetery.

Following the prayer, the Thomas County Central High School Army JROTC Color Guard presented the colors and the group said the Pledge to the Flag of the United States of America. Brandon Allen, drum major and trumpeter for Thomas County Central Marching Yellow Jacket Band, played The National Anthem. Also in attendance was band director Joe Regina. The colors were then retired and the cadets rejoined the group for lunch.

Kiwanian Bob Parrish presided at the program and led the club in a very moving POW/MIA Remembrance Ceremony with a table set for missing persons from all five services:  Army, Navy, Air Force, Coast Guard, and Marine Corps with service flags and MIA flags at each place setting with napkins and utensils.

Every item on the table was featured with its meaning. The white table cloth, the round table, the single red rose, the yellow ribbon, slices of lemon and salt on the bread plates placed on the dinner plates, the lighted candle, the Holy Bible, the five empty chairs, and the inverted glasses at each place setting were explained followed each time by the assembly saying “Remember!”

A moment of silence for those missing was observed, then glasses were raised in a toast to honor America’s POW/MIA’,  the attempts to account for them, and to the safety of all now serving our nation. There are more than 82,000 missing service personnel from World War II, Korea, Vietnam, the Cold War, Gulf Wars, and other conflicts.

C. J. Rehberg, 94, was recognized as our oldest veteran present, having served in the U. S. Navy in the Pacific during World War II.  Also recognized was Leon Blair, who has been faithful to attend the Veterans Day observances for years but was unable to be with us this year. Blair served in World War II and was 100 years old in September.

Each veteran introduced himself or herself and told branches and where served, followed by Parrish, Kiwanis pianist for over 25 years, playing the five service songs with veterans standing during their service song.

Logan Lewis, a World War II U. S. Navy hospital corpsman and Kiwanis member since May 19, 1952, passed away September 12, 2020, and would have been 93 on the day of his burial. He was honored in a special tribute with a picture display, empty chair with black bow, and remembrances given by the group. This tribute was concluded with Allen’s playing of “Taps.”

To conclude the program, “God Bless America” was sung.  It was written by Irving Berlin in 1918 at the end of World War I but was rewritten for Armistice Day, 11 November 1938, for Kate Smith as war clouds gathered over Europe before the beginning of World War II.