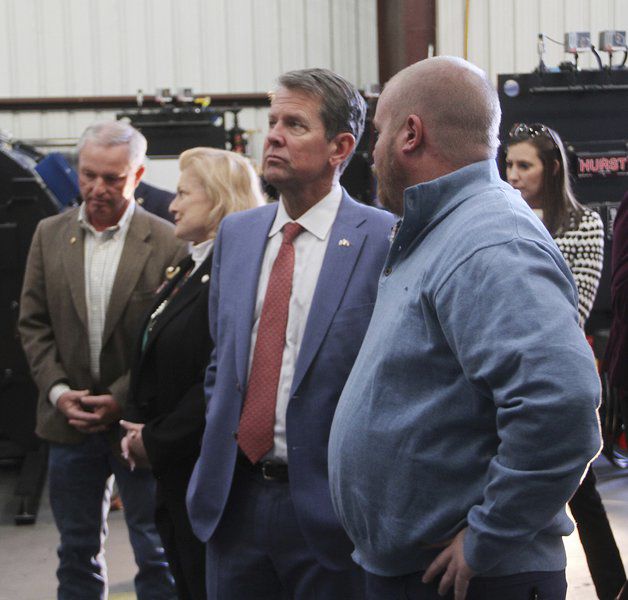 Pat Donahue/Times-EnterpriseChad Fletcher of Hurst Boiler and Welding conducts a tour of the facility Thursday afternoon for Gov. Brian Kemp. 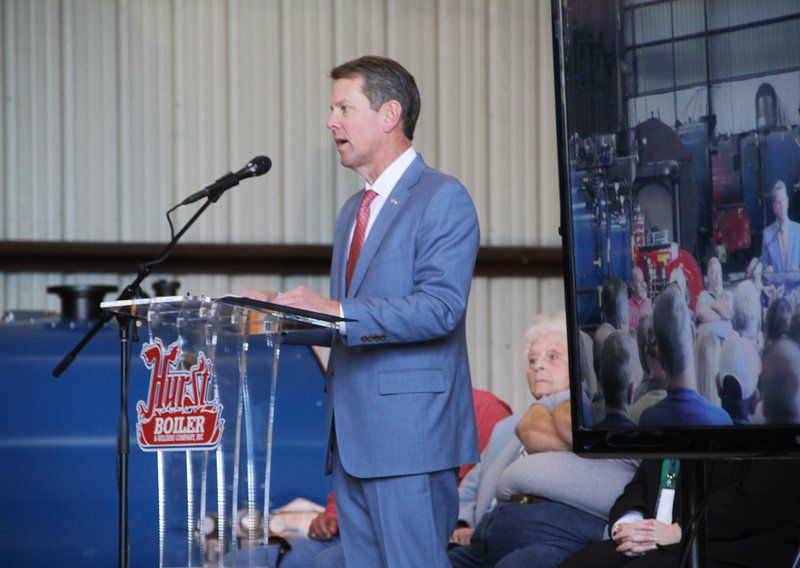 Pat Donahue/Times-EnterpriseGov. Brian Kemp speaks on the strength of Georgia during a stop Thursday at Coolidge's Hurst Boiler and Welding. Gov. Kemp's visit to Hurst was part of his Georgia Made tour.

Pat Donahue/Times-EnterpriseChad Fletcher of Hurst Boiler and Welding conducts a tour of the facility Thursday afternoon for Gov. Brian Kemp.

Pat Donahue/Times-EnterpriseGov. Brian Kemp speaks on the strength of Georgia during a stop Thursday at Coolidge's Hurst Boiler and Welding. Gov. Kemp's visit to Hurst was part of his Georgia Made tour.

Kemp's visit to the Coolidge industry is part of the governor's ongoing effort to highlight products made in Georgia. He pointed out that Hurst products are shipped worldwide.

Noting there are 4.6 million people employed in Georgia, the governor said, "It's really a great time to do business in Georgia."

Businesses outside metropolitan areas, such as Hurst Boiler, should be highlighted, Kemp said.

Fifty jobs in Coolidge or Bainbridge is like a Fortune 500 company providing 500 jobs in Atlanta, Kemp told the large crowd gathered in a Hurst campus building.

"Georgia is the greatest state in the country to live, work and raise families," he said.

After touring the Coolidge industry, Kemp said he wants Georgians to have opportunities in all parts of the state and for children not to have to leave their home communities to find work. Companies moving corporate headquarters to Georgia is always celebrated, he said.

When asked about his Wednesday appointment of business executive Kelly Loeffler to the U.S. Senate, Kemp said Loeffler is a great conservative and businessperson.

"She will have my full support," the governor said.

Chad Fletcher, Hurst Boiler director of aftermarket sales and a third generation Hurst, expressed gratitude to the community, the state and people who have supported the company "throughout the good and bad times over the last 50 years."

"They never planned to go into business," Fletcher said, "but it was needed to provide food, shelter and a better life for their three sons, Tommy, Hayward and Jeff, their daughter, Teri, and many generations to follow."

Hurst continues to be a family business, with sons, a daughter and grandchildren following in their beloved grandparents' footsteps, Fletcher said.

"We are not just a family, we are the boilermaker to the world," he added. "Hurst Boiler is no longer a dirt-floor shop with 20 hard workers, but a 300,000-square-foot, under-roof facility with more than 260 employees."