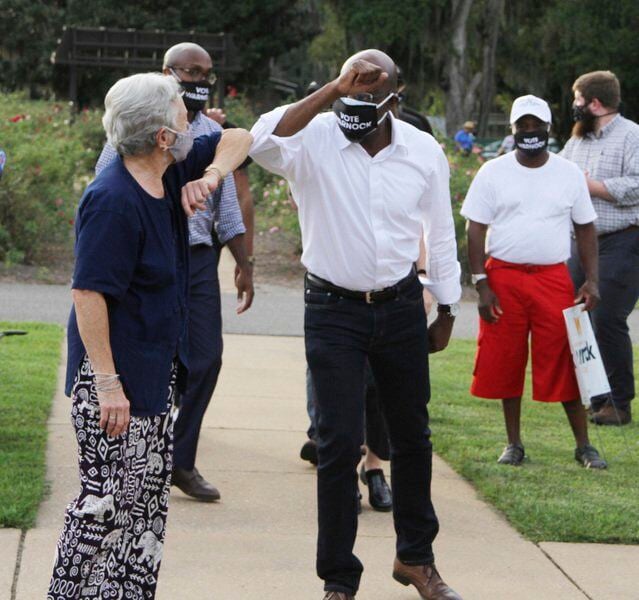 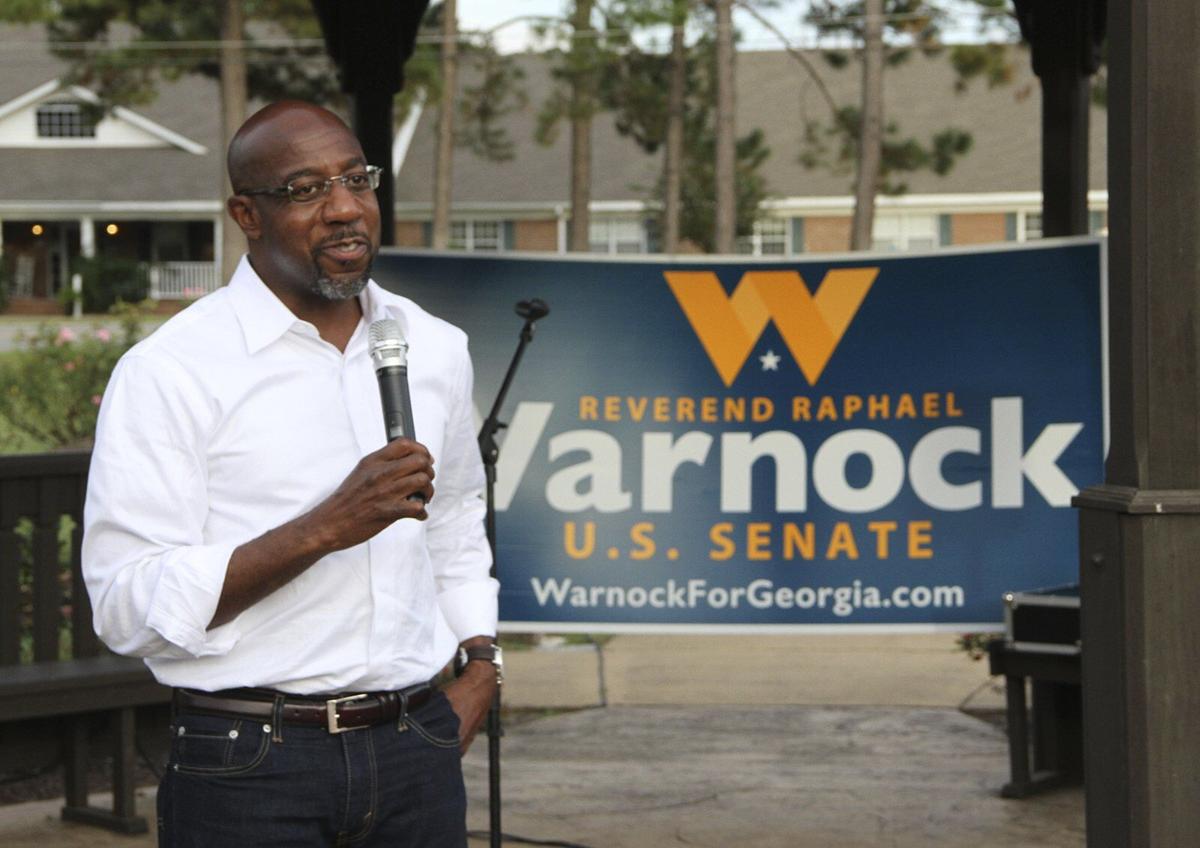 Warnock, who is pastor at the historic Ebenezer Baptist Church, is now considered the front-runner for the U.S. Senate seat currently held by Kelly Loeffler. The Democrat brought his campaign to dozens of supporters Wednesday evening at Thomasville’s Rose Garden.

Warnock grew up in Savannah and now is the pastor of the church where the late Rev. Martin Luther King Jr. stood in the pulpit.

He also pointed out that he too has been arrested for peaceful protests, including one at the state Capitol where he pushed for Medicaid expansion.

“If you’re afraid to get arrested,” Warnock said, "you should have gone to another church.”

Warnock grew up the 11th of 12th children and his family lived in the Keaton Homes projects in Savannah. After graduating from Johnson High School, he attended Morehouse College on what he described as a “full faith” scholarship.

“I got there through hard work, grit and determination but that alone didn’t get me there,” he told supporters. “Somebody gave me Pell grants. Somebody gave me some low-interest student loans. I had to get up and go but somebody had to give me a ladder of opportunity so I had somewhere to go. And that’s what good public policy does. It helps people to live their very best lives.”

In a visit to the U.S. Capitol in 2017, Warnock went to protest against the tax cuts with other faith leaders and to get into what his parishioner, the late civil rights hero and U.S. Rep. John Lewis, called “good trouble.”

“They were giving this tax cut to people who need it the least,” he said. "I said, ‘listen, a budget is not just a piece of paper. A budget is a moral document. Show me your budget and I will show you your values. And if this budget were an EKG, it would suggest that America has a heart problem and I don’t believe that America at its best is a heartless nation.' We had come to the nation’s capital to perform heart surgery.”

Warnock, in his first run for office, bolted to the top of the polls a few weeks ago. There are 21 people running for the seat in what is known as a "jungle" primary, meaning any candidate from any party is in the same vote.

Most polls have Warnock substantially in front, but not close to getting a majority. The Monmouth University poll has him at 41% of the vote, which is the sum total for the top two Republicans in the primary, Loeffler and U.S. Rep. Doug Collins.

The second-leading Democrat in the polls, Matt Lieberman, is registering at less than 10% in most polls.

Warnock’s campaign treasury also has been bolstered in recent weeks. An October 14 filing with the Federal Election Commission shows his campaign bringing in more than $21.9 million in contributions. According to the Atlanta Journal-Constitution, Warnock raised nearly $13 million in the third quarter alone.

“We have been very disciplined and focused,” he said. “I am a first-time candidate. I just got in the race January 30. So I spent the first couple of months building a coalition and a campaign. But once we started communicating with the voters widely, people are responding to our message. They are responding to our message because we have been out communicating at that level for about the last eight weeks.

“And when they hear I’m a kid who grew up in public housing, first college graduate in my family, who has spent his time at Ebenezer Baptist Church focused on the people outside the church as much as I am focused on the people inside the church, that is a message that is resonating with people who I think understand how desperately our country needs moral leadership at this moment.”

Warnock added what is needed in Washington is leadership that unites rather than divides and people who represent the populace who understand them.

“I think we are ready to push past the forces that traffic in division because they have no vision,” he told supporters. “The folks who sit in high offices do not know how to lead us, so they try to divide us and distract us. And while we are busy being distracted, they are laughing all the way to the bank.

“And they are being enabled by politicians who move seamlessly from corporate boardrooms to political backrooms,” Warnock added. “It’s time for the state of Georgia to have a United States senator who understands the struggles of ordinary people. I think the rich and well-connected have enough representation in the Senate. It’s time ordinary folk have a representative.”

“They both think it’s a good idea to get rid of the Affordable Care Act in the middle of a pandemic,” he said. “We need all of our neighbors to have health care coverage. If that wasn’t obvious before a global pandemic, it ought to be obvious now.”

Warnock also called upon Dr. King’s words of “we are tied in a single garment of destiny.”

“In other words, our connection to one another is inescapable and inextricable,” Warnock said. “We are stuck here, y’all, with one another.”

Rev. Warnock called for a livable wage and for an end to division.

“In this defining moment in America,” he said, "rather than to give in to the forces of hatred and bigotry and division, the forces of racism and sexism and misogyny and homophobia, and hatred of immigrants in a nation of immigrants, we’ve got to reach out toward one another.

“We are living in a moment in which we have many challenges in our country,” Warnock continued. “But those challenges are exacerbated by the politics of division and distraction. So we have to push against that and stay morally focused and do what we need to do in order to recover from the pandemic, to strengthen our economy and win the future for all of our children.”

Warnock also promised the crowd that he would represent the entire state and not just the more populous areas of metro Atlanta.

“You are not flyover country for me,” he said.

Linda Lee Jioner Linda Lee Joiner age 74 passed away peacefully at home June 18, 2021. Linda was born March 15, 1947 in Thomasville, Georgia to Blanche Ward and Lee Darby Varnedoe. A Graveside Funeral Service will be held at Roseland Cemetery, Saturday, June 26, 2021 at 10:00 AM. She is surv…

Mary Rose Tolbert passed away June 13, 2021, after a lengthy period of declining health. She was born in Bedford, England, on March 11, 1943. She dedicated herself to raising three boys, who she loved completely. She was a talented cook and baker, and enjoyed sports, the outdoors, fishing, a…