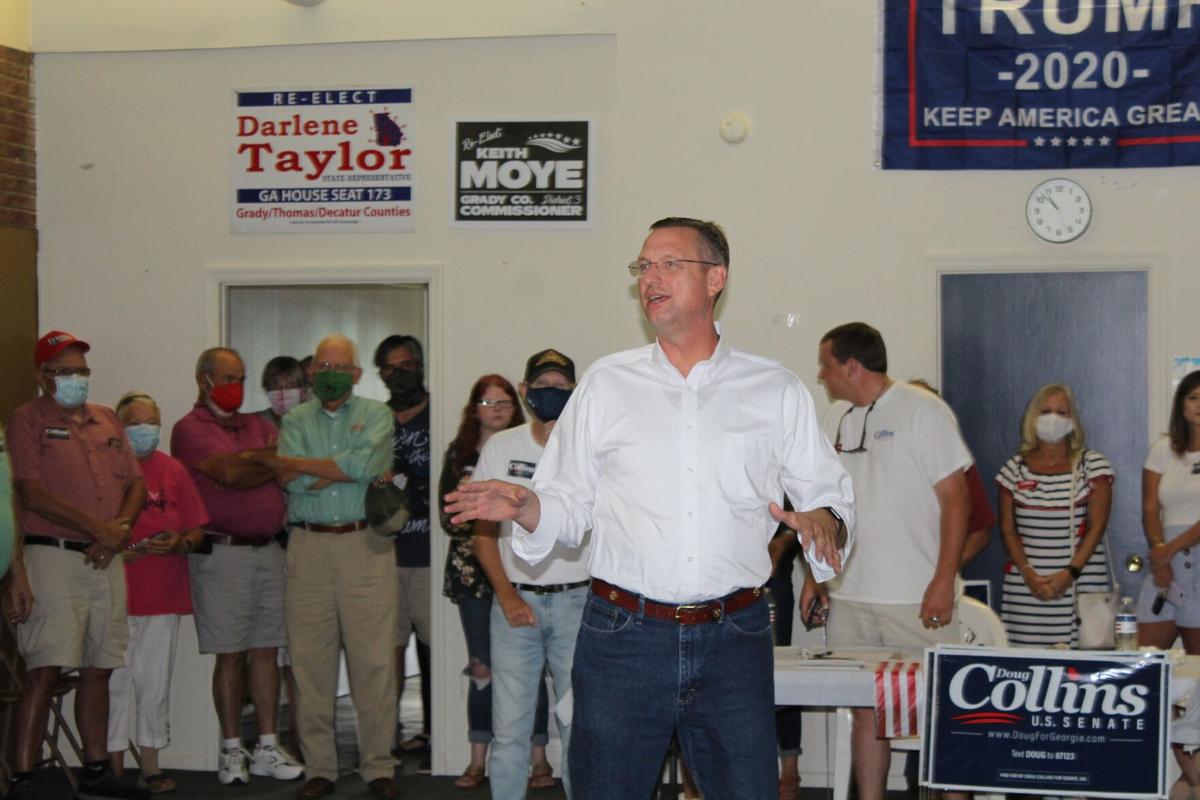 Erik Yabor/Times-EnterpriseCollins speaks to a crowd of potential voters 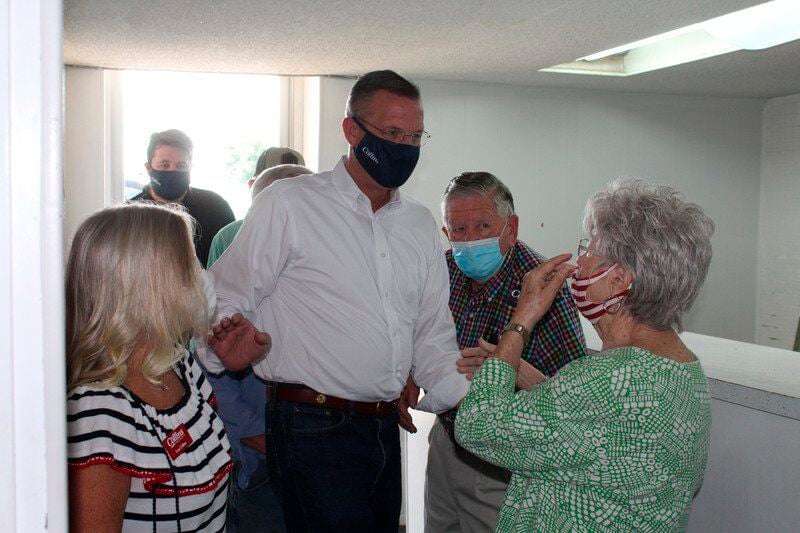 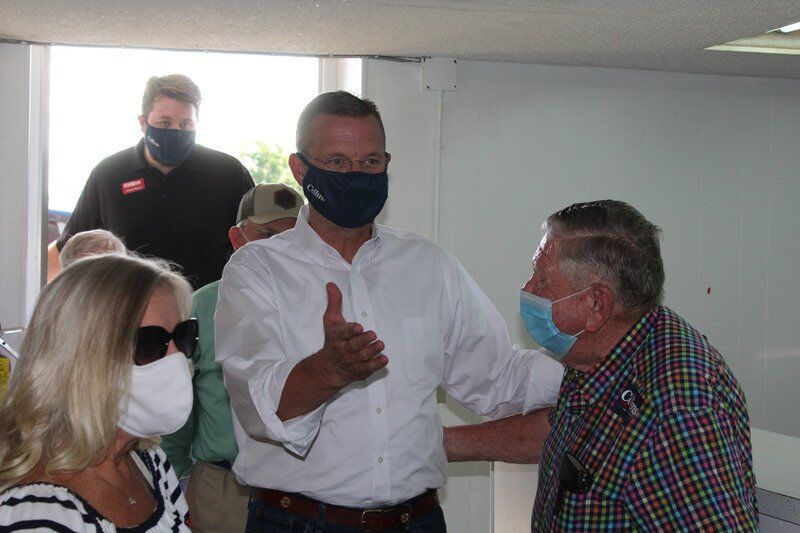 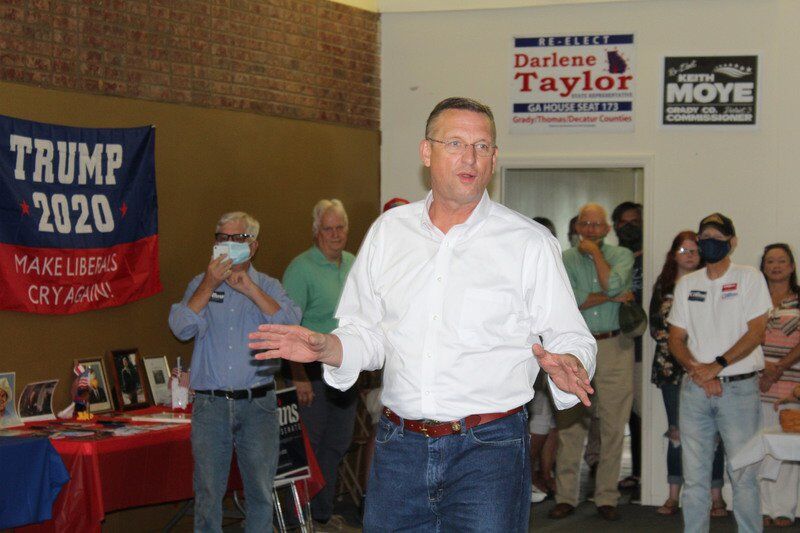 Erik Yabor/Times-EnterpriseCollins speaks to a crowd of potential voters

CAIRO — U.S. Senate candidate Doug Collins said he and President Donald Trump have more than a few traits in common.

Collins, one of six Republicans running in a crowded “jungle primary” this November to unseat Senator Kelly Loeffler, swung through southwest Georgia Thursday to meet with potential voters. The 54-year-old father of three said he believed Loeffler, who was appointed by Governor Brian Kemp to fill the seat vacated last year by former Senator Johnny Isakson, has aired an estimated $25 million in ads against him to misconstrue his record.

"Right now, we’re in the middle of a campaign in which there are a lot of untruths being told about us,” he said in a seperate event in Thomasville Thursday morning. “We’re here setting the record straight and when people see that they understand when a lot of money is being spent when you’re trying cover up a record, and Sen. Loeffler is trying to cover up her record.

Loeffler has assailed Collins in ads for defending criminals, but he points out he was assigned cases when defendants could not afford independent counsel – a right delineated in the Constitution.

“It says you have a right to counsel, (and) that doesn't mean if you’re just caught in insider trading and can get to spend $1,000 an hour on one,” he said, referencing allegations that Loeffler and her husband had sold several million dollars worth of stock prior to knowledge of the COVID-19 pandemic becoming widely known among the public. Loeffler has denied any wrongdoing in the transactions, claiming the trades were made by a third-party advisor.

“When these folks can’t afford (a lawyer) they need somebody to stand up for them as well.”

None of the men depicted in the ad were ever Collins’ clients, he said.

“Why would you put an ad out and just blatantly lie?” he asked. “Because you have no record and you don’t know what to do because you’re scared.”

The lifelong Georgian and former pastor said part of why he chose to ran for the Senate is because he believes Georgia needs to have stronger leadership in Washington.

“I’m going to fight for our people every day of the week,” he said.

If elected to the Senate, Collins said he could serve as a voice for farmers, noting that his district is the second-largest agricultural region in Georgia.

“These are not new situations for me,” he said. “I could just bring them now and do it statewide.”

Collins said his campaign is about what lies ahead for the state and the nation.

“It’s real simple for me. It’s about my three kids,” he said, referring to Copeland, Cameron and Jordan Collins. “It’s about looking ahead and doing stuff for the future, actually standing on a record and to not apologize for where i was at one point.”

Collins, who spent three terms in the Georgia House of Representatives before being elected to the U.S. House in 2012, where he serves as the ranking member of the House Judiciary Committee, called the addresses from last week’s Democratic National Convention “sunset speeches.”

The contrast in the tone of remarks this week from the Republicans is different, Collins said.

“You look at last week and hearing what I call the ‘doom and gloom’ convention, everything is bad,” he said. “I think the voters are going to see through that. It was a sunset last week. It’s a sunrise this week.

“I’m one who looks up in the morning,” he said. "That’s the message I’m trying to send to folks, that we can fight for what matters, that Georgia is a state that needs to come together. We have a message that Georgia is a great place to be, and that’s what we’re going to continue to fight for.”

Greeted by the Republican Friends for Freedom in his Thomasville stop, Collins said he tells potential constituents he has been a fighter for them in the nation's capital and that he has been able to accomplish landmark measures, such as the First STEP criminal justice reform act he authored.

“We need to have a civil society,” he said. “We need to make everybody is lifted up and when people are mistreated, they’re taken care of, that all views are brought up.”

The son of a 31-year veteran of the Georgia State Patrol, Collins said law enforcement needs to be held accountable when it does wrong. He said what led to Jacob Blake being shot by police in Kenosha, Wisconsin, sparking more protests and boycotts from professional athletes, needs to be investigated.

“We need to protect the right of free expression of speech,” he said, "but we don’t have to condone lawlessness.”

Former state representative Gene Maddox, who served several years with Collins in the Georgia legislature, urged those in attendance to ensure Collins is elected to the Senate this year.

“I want you all to do two things for him,” Maddox told attendees. “Pray for him and support him.”