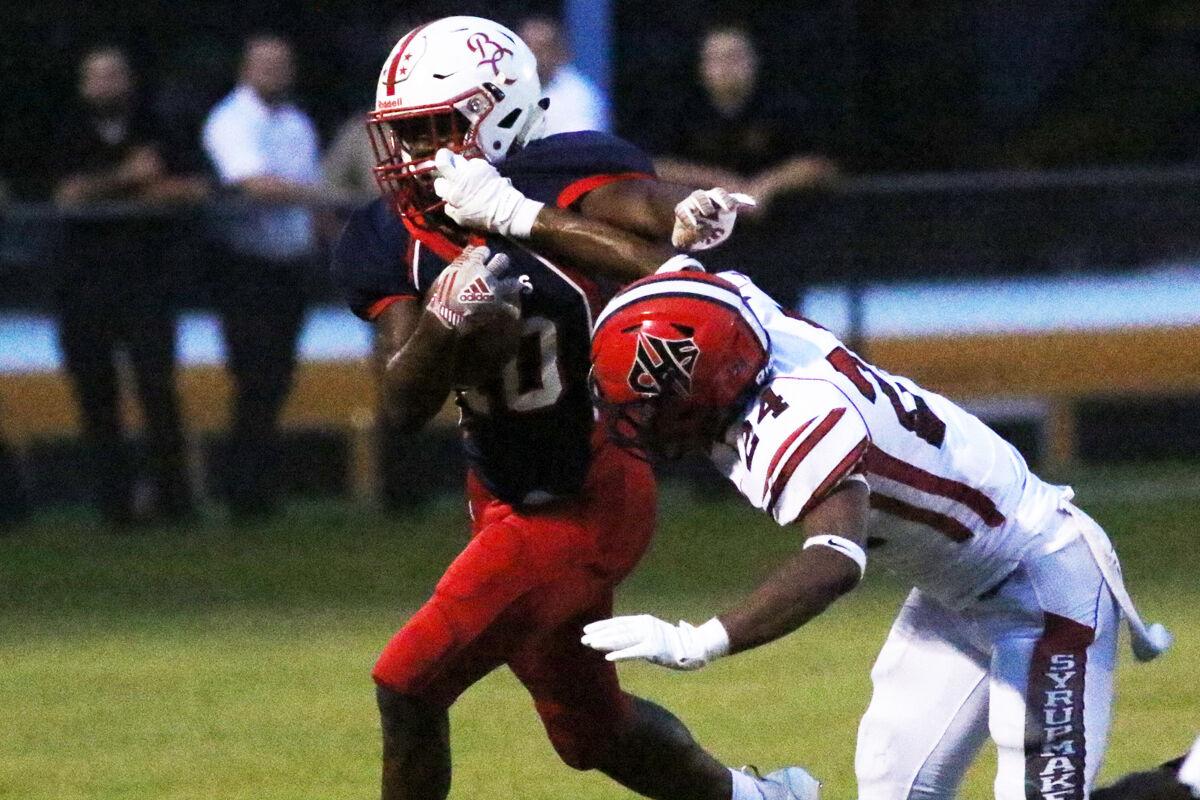 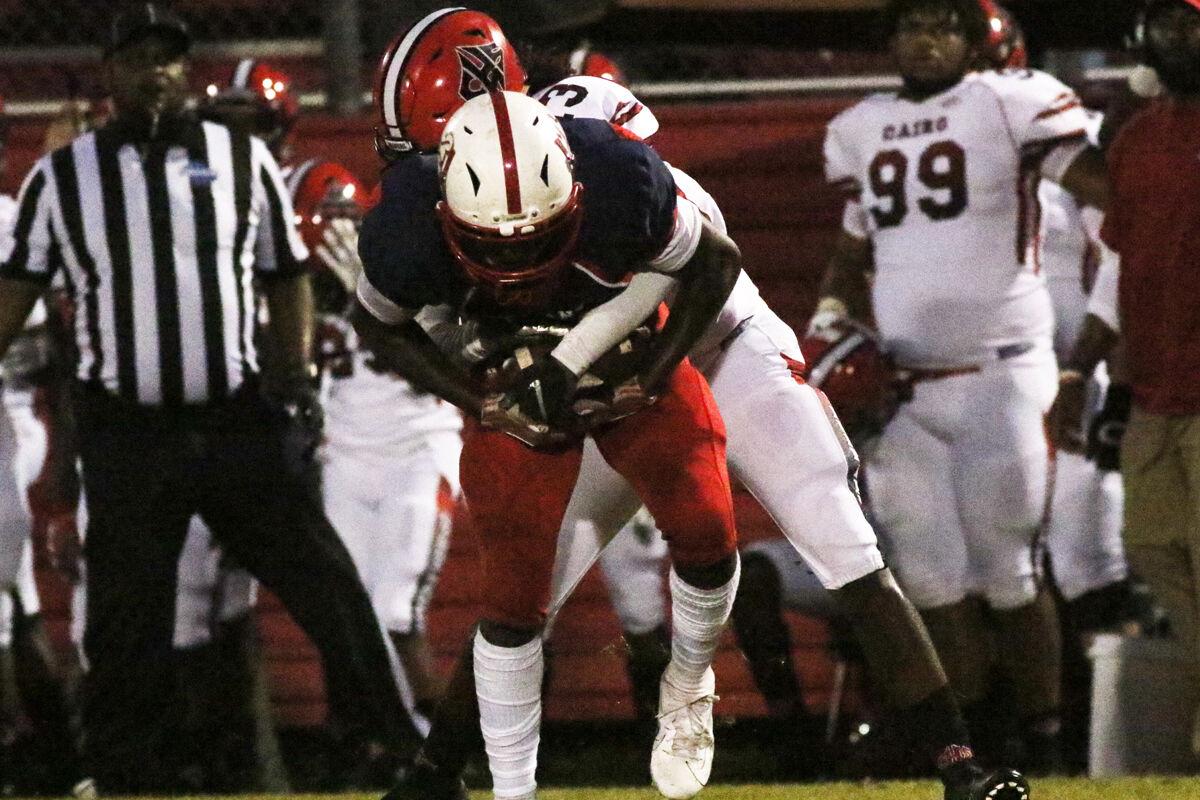 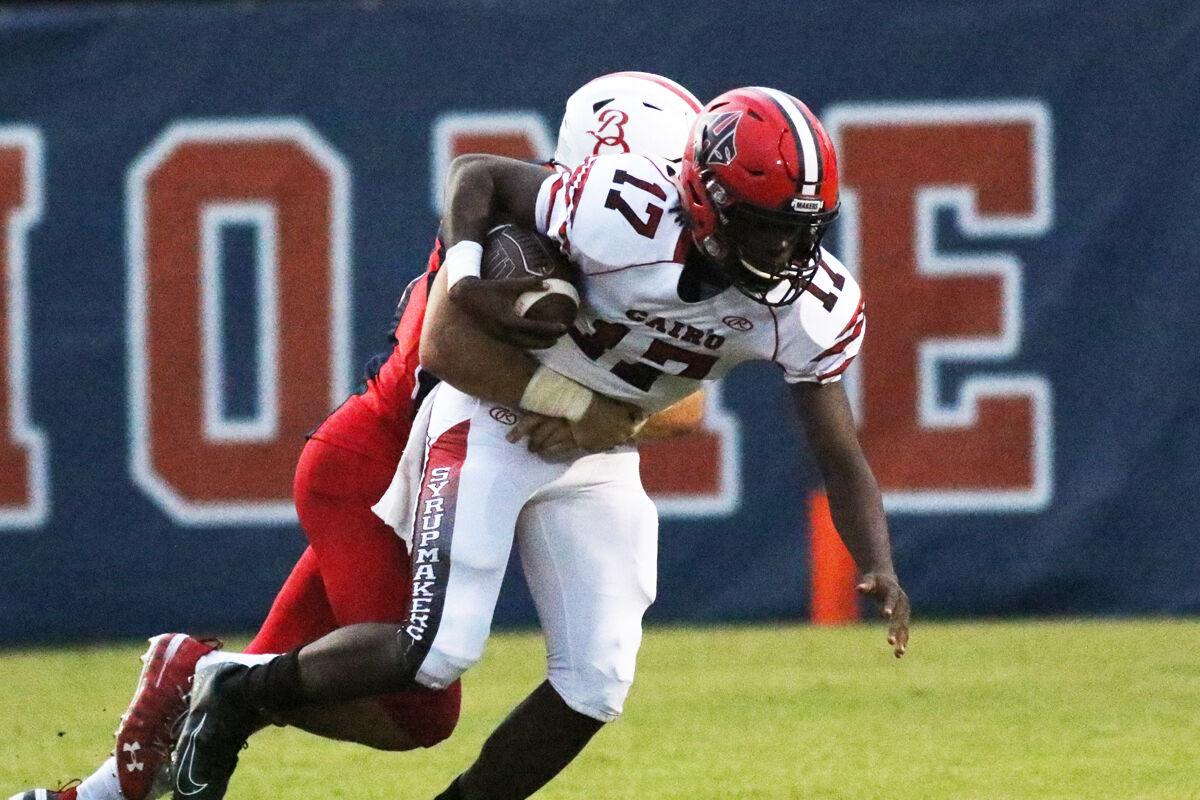 QUITMAN — John Carter thought the play was over.

He and the rest of Cairo's defense, to be exact, thought it was too.

And just about every fan in attendance thought the same.

On a weird play that saw Brooks County's Omari Arnold pick up two yards on fourth-and-2 from the Cairo 49, most everyone thought the officials had blown the play dead after Arnold's first down pick up.

Most everyone except Arnold.

The junior kept going, somehow coming out of the pile and running to the endzone with 9:25 left in the third quarter.

Arnold scored on two touchdown runs and caught a 19-yarder for a score as Brooks County beat Cairo 26-24 Friday night at Veterans Stadium in a nail-biter than went down to the wire.

Arnold's third-quarter dash broke Cairo's short momentum they had gained from scoring 10 points in the final minute of the second quarter to pull to within 13-10.

"I don't know," Carter said of the play. "We didn't hear anything. It really cost us the game. We played good and we came back in the second quarter and did what we had to do."

In a game that was dominated by defenses, 12 of the combined 50 points came from two blocked punts that were recovered for touchdowns, one by each team, and an impressive 54-yard field goal from Cairo kicker Noah Jones.

The Syrupmakers (0-2) were held to just 133 yards and just six first downs. But they remained in the game — until Arnold's mad dash early in the third quarter.

They made a furious comeback and in the closing seconds, drove to the Brooks County 26 before their 36-yard potential game-winning field goal went wide left as time expired, igniting a wild Brooks County celebration on the field.

Arnold also hauled in a 19-yard touchdown pass from Nitavion Burrus to give the Trojans a commanding 26-10 lead, sending many heading to the exits.

Tay Solomon scored on a 4-yard touchdown run after quarterback Kevin Speed hit Sam Harris on a 60-yard pass to give the Syrupmakers a first-and-goal at the 2. After Solomon's run, Speed and Harris connected on the 2-point conversion pass to pull Cairo to within eight at 26-18 with 1:47 left.

Then after Carter recovered a Brooks fumble and returned it 24 yards for a touchdown to make it 26-24 with 1:30 left, the Trojans stopped Cairo on the 2-point conversion attempt.

Cairo had one final chance after stopping Brooks with 1:08 left. Starting at their own 42, they drove to the Trojans 26 before coming up short.

"It was one of those nights," Cairo coach Steve Devoursney said. "The second half, we fought our butts off and did some things we thought to give us a shot. It's tough right now, losing two games like we have.

"But like I told our kids, you always want to have a chance at the end. Everything we practiced, we executed. I'm proud of them. We haven't had a lot of practice, but we are executing stuff that usually takes two or three weeks. If it's anybody fault, I guess blame me. But I thought the guys really played well tonight."

The outcome hardly seemed possible after a first half that was full of big plays.

In the span of 30 seconds late in the opening quarter, Brooks County took control. Despite Carter having stopped Arnold for what appeared to be no gain at the Trojan 20, Arnold spun out of the potential tackle, eluded Solomon and scampered down the right sidelines on an 80-yard touchdown run.

Cairo's bad luck on the drive continued on the extra point attempt. What they thought was a partial block on Regan Chaistain's attempt, the ball skipped across the bottom of the cross bar for a 7-0 advantage with 30 seconds left in the first quarter.

Brooks County took a 13-0 lead when Cameron Priest blocked a Cairo punt and J'Shawn Baker recovered the loose ball in the end zone for a score at the 5:25 mark of the second half.

But Cairo, which had no first downs and 33 yards of total offense in the first two quarters, played field position to get into Trojan territory late. Jones then drilled a 54-yard field goal with 49 seconds left.

The Syrupmakers then went into halftime with positive momentum. With Brooks trying to burn the final seconds off the first half clock, Devoursney used all of his timeouts and kept Brooks backed up inside its own 20 and forced a punt.

As time expired, a herd of Cairo defenders blocked Brooks' punt and Carter recovered in the end zone for a score. After Jones' extra point attempt, the Syrupmakers trailed 13-10 at halftime.