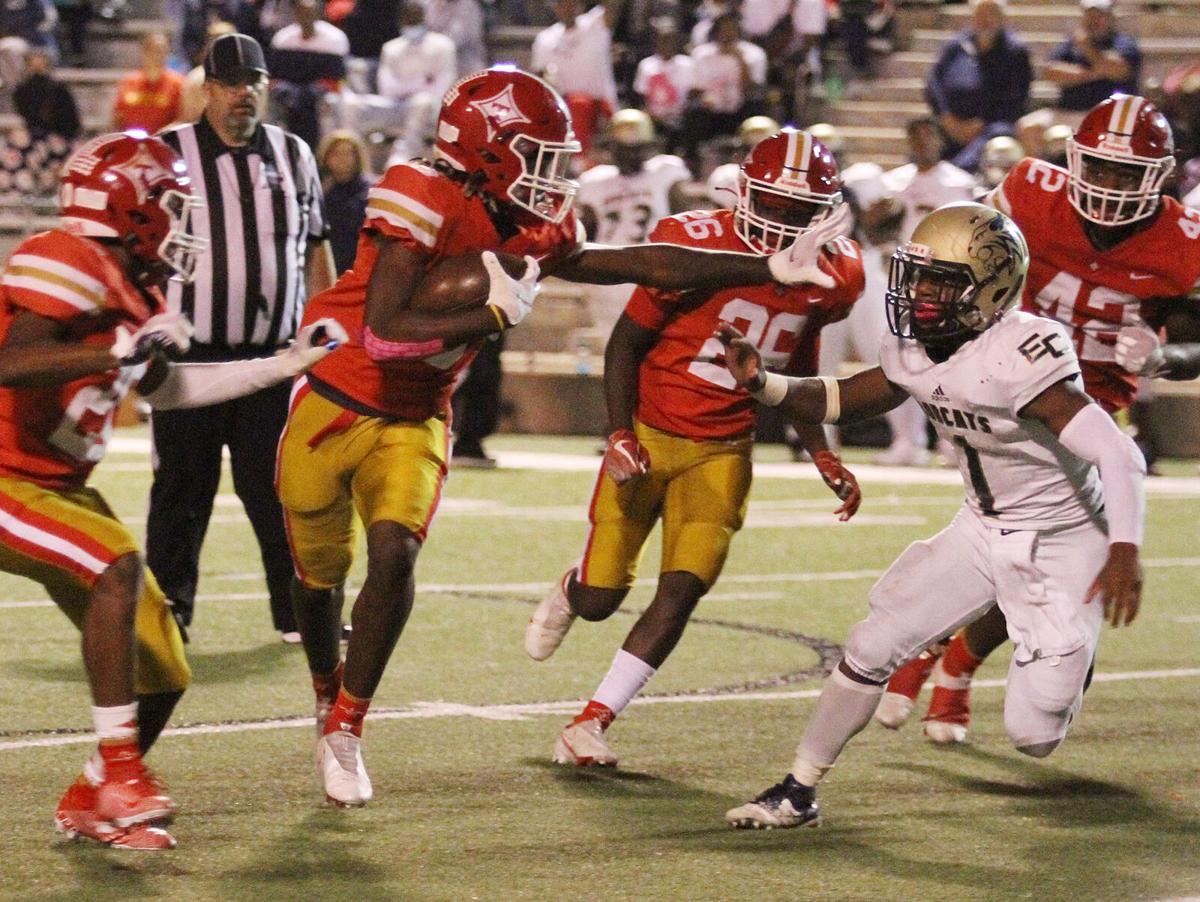 Jimmy Bowdry delivers a stiff-arm on his third quarter scoop-and-score. 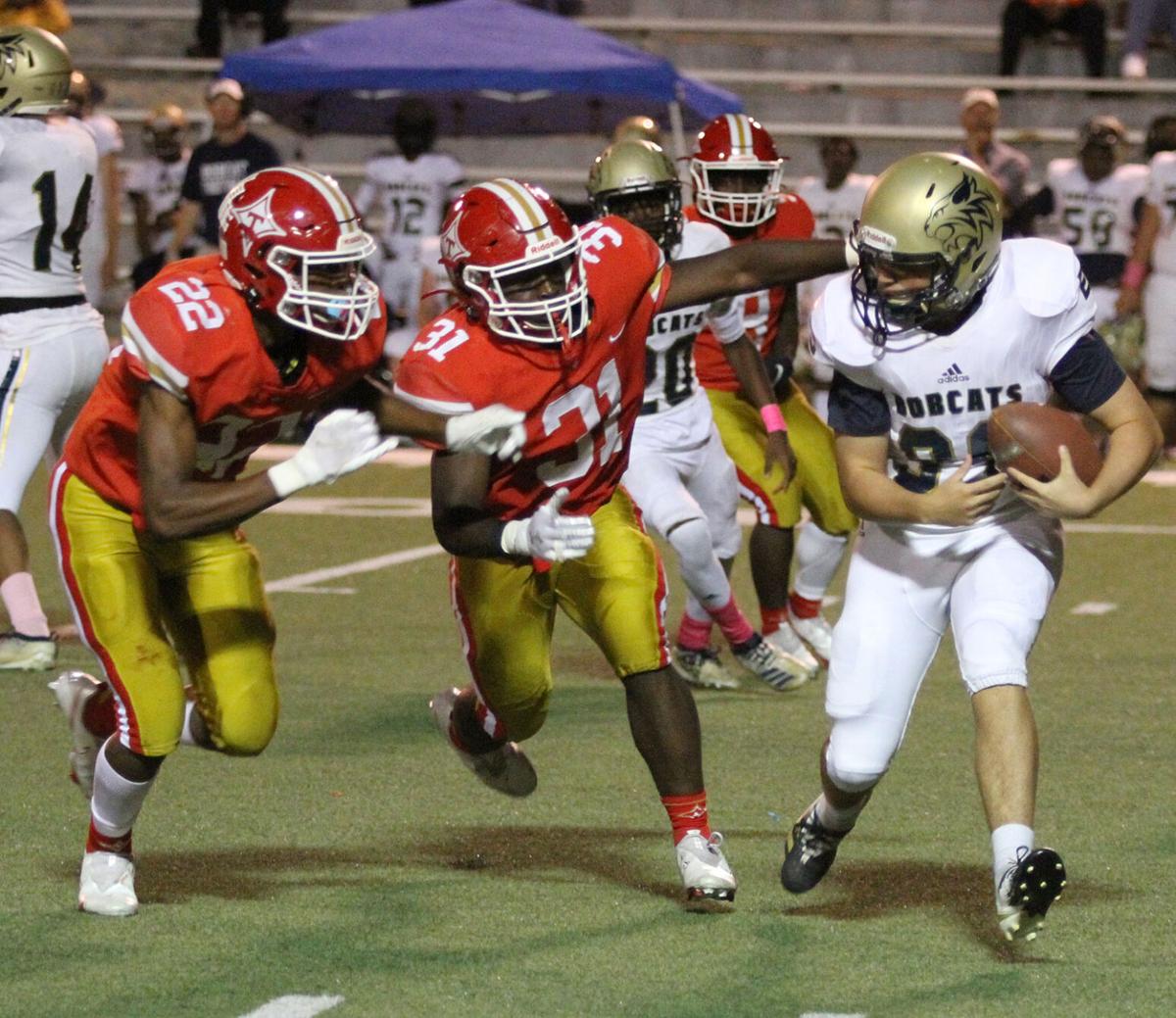 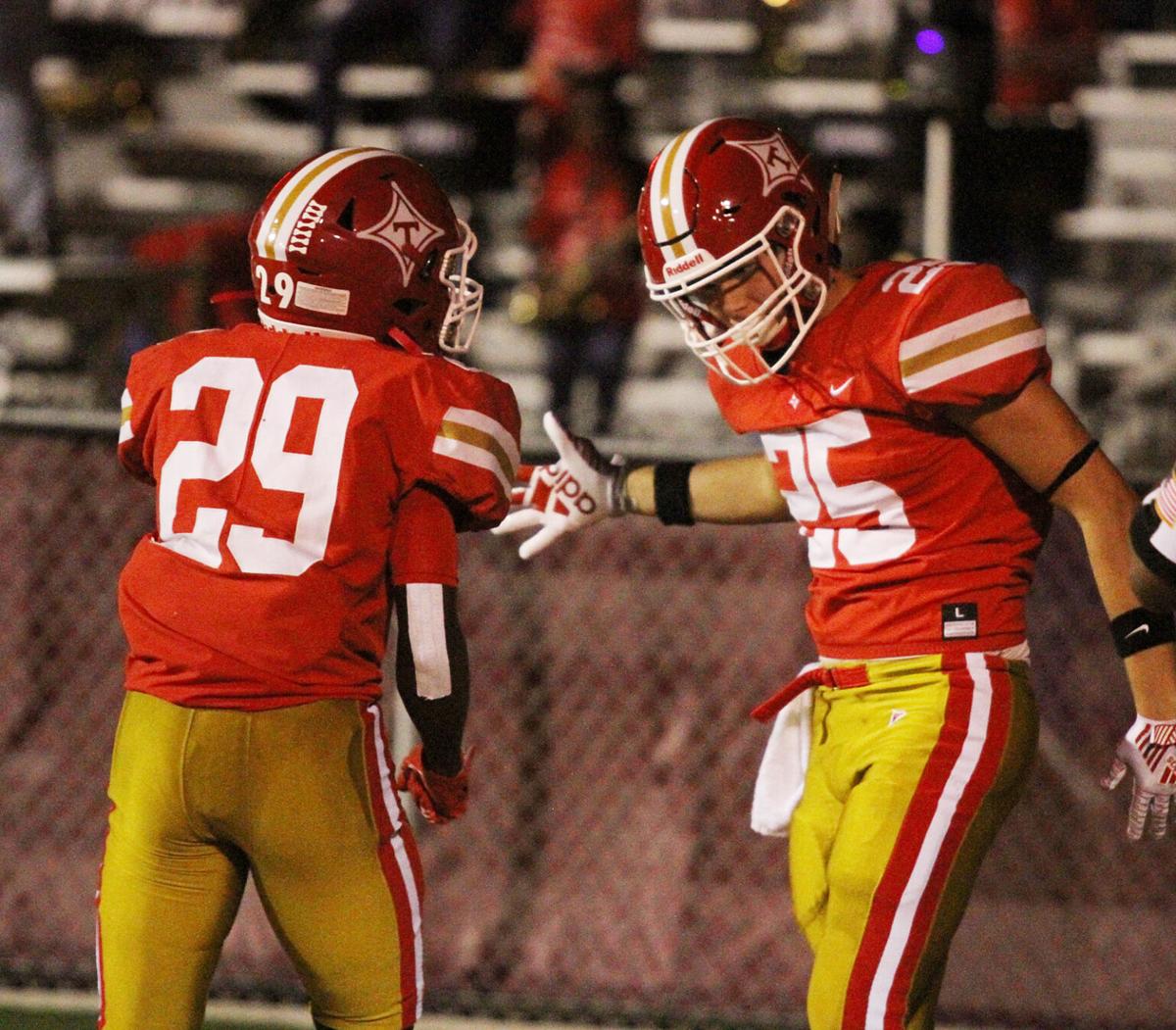 Jimmy Bowdry delivers a stiff-arm on his third quarter scoop-and-score.

And they tried to make sure of that time and time again.

The Bulldogs upended the No. 5-ranked Bobcats 31-14, picking up their first win in four weeks and evening their record at 3-3. The loss was the first on the season for the Bobcats (3-1).

“I’m proud of the kids,” Bulldogs coach Zach Grage said. “We’ll take the win. I’m proud of our fans. I thought their energy was good.

“But I’m not satisfied. We’ve got a little ways to go, but it’s a great way to start the weekend.”

Thomasville trailed 6-3 when the Bulldogs took over at the Bobcats’ 26-yard line, the result of the defense stiffening after Austin Chastain’s punt pinned Early County inside its own 5.

The short drive culminated in Ronnie Baker’s 18-yard touchdown toss to tight end Mason Beckham, and Chastain’s point after put the Bulldogs in front 10-6 with 7:05 left in the first half.

That led to the first of several Thomasville pooch and onside kickoff attempts. The Bulldogs recovered the ensuing kick at the Bobcats 31 but couldn’t capitalize.

After Early County recovered a rolling kickoff to start the second half, the Bulldogs knocked the Bobcats punter back for an 11-yard loss on fourth down. That set up Ty Anderson’s 3-yard run and a 17-6 lead.

It didn’t take long for the Bobcats to respond, as Brayden Enfinger hit an open Bra’Veon George for a 60-yard touchdown pass, cutting the lead to 24-14 with 5:08 to play in the third quarter.

Early County, though, never seriously threatened again, and the Bobcats’ fortunes also took a turn when Jeremiah Hutchins was knocked out of the game. Hutchins, who scored on a weaving 80-yard run in the first quarter, eventually was taken from the field for further evaluation.

The Bobcats unleashed a throwback offense. What was once in vogue throughout Georgia high school, the Wing-T is now rare to see and prepare for.

“It took us a little bit to adjust to their edge rush,” Grage said.

Another turnover set up Thomasville’s final score, Dimitrius Myrick recovered Enfinger’s fumble at the 40, and Baker hit an open Taraje Felton, who got behind the Early County secondary, for a 43-yard scoring strike.

Grage urged his team after the game to display more desire and passion.

“If we can win the rest of the games by one point, I’ll take it,” he said. “But it’s frustrating, because I know we haven’t reached our potential yet. Maybe you don’t want to reach it in game six, but I don't want to keep waiting around at this point. If you don’t play your best game, you’re going to get snuck up on, especially in Region 1-AA.”

Thomasville travels to Worth County on October 23.