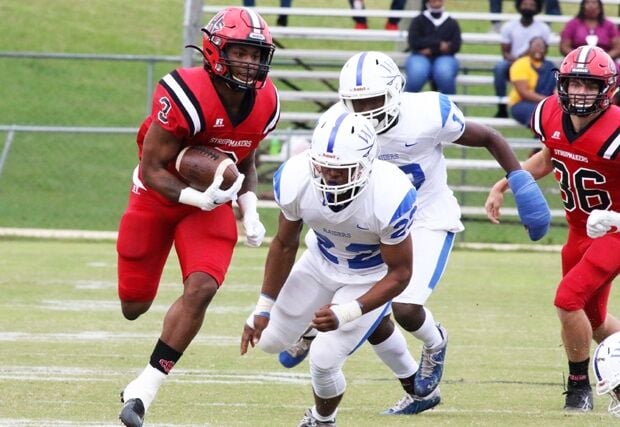 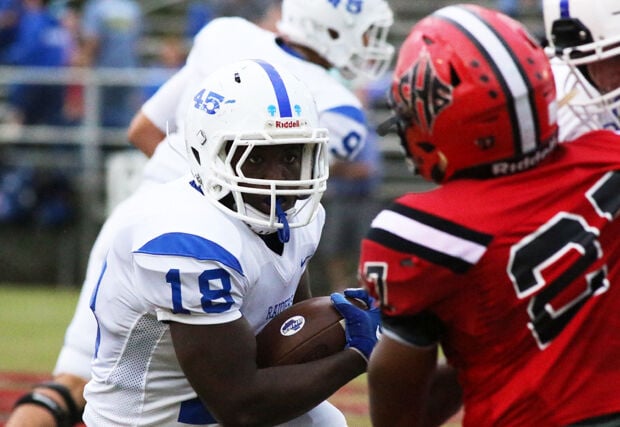 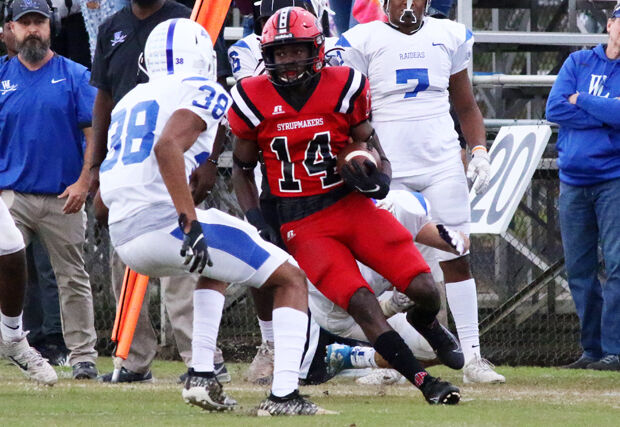 Cairo's Jaylen Spence (14) looks for yardage against West Laurens as Qualyn Travick (38) defends Saturday afternoon in the first round of the Georgia High School Association Class 4A playoffs at West Thomas Stadium.

Cairo's Jaylen Spence (14) looks for yardage against West Laurens as Qualyn Travick (38) defends Saturday afternoon in the first round of the Georgia High School Association Class 4A playoffs at West Thomas Stadium.

And turning the corner at the right time.

This was about as good as it could get — at least if you were wearing red and black Saturday afternoon at West Thomas Stadium.

There was no Thanksgiving hangover for Cairo High School and despite an unorthodox setting, the Syrupmakers built a 20-point halftime advantage and rolled to a 37-0 victory over West Laurens in the first round of the Georgia High School Association Class 4A playoffs.

After a first-round loss against Baldwin last year in the first round, Cairo showed very little weakness against West Laurens. They will play at either Region 3-4A champion Benedictine or play host to Troup in the second round next week. The two teams played later Saturday night in Savannah.

The GHSA moved all Class 4A and 2A first-round playoff games to Saturday instead of the traditional Friday night because of a lack of officials.

The Syrupmakers didn't seem to mind the Saturday afternoon matinee in winning their fifth game in a row to improve to 5-4 on the season. In fact, they played perhaps their best game of the season at the right time. They were in control from the start and were never seriously challenged.

"We were," Cairo coach Steve Devoursney said. "We'll take it and move on to the next round."

While the defense harassed the Raiders and held them to just 201 yards of total offense, including a paltry 64 yards rushing, running back Tay Solomon scored two first-half touchdowns, including a 44-yard sprint on the fourth play from scrimmage, and the Syrupmakers never looked back.

"Once we do well in practice, it carries over to the game," Solomon said. "When the offensive line turns up, I'm going to turn up too. When the line gets going, I go too."

He added a 6-yarder with 1:38 left in the second quarter, while kicker Noah Jones booted two field goals — a 47-yarder and a 27-yarder — as Cairo toted a 20-0 lead into halftime. Jones also added a 28-yarder to start the fourth quarter.

The Syrupmakers didn't quit in the second half.

On its opening third-quarter possession, Cairo marched down the field and Speed executed a perfect option pitch to John Carter that went for a 27-yard touchdown at the 10:30 mark and a 27-0 lead.

Then they sent some West Laurens fans home early when Kilijah Thomas somehow got wide open in the secondary and Speed hit the senior on a 75-yard bomb with 7:17 left in the third quarter.

The Syrupmakers blocked a 27-yard field attempt midway through the second quarter on the Raiders' most promising drive of the game. Then in the third quarter with West Laurens at the Syrupmaker 33, Cairo's Gary Davis sacked West Laurens quarterback Jace Thompson for a 16-yard loss on fourth-and-seven.

One of the few miscues of the night, a personal foul penalty, negated a 37-yard pick-six from Jeffery Jones midway through the fourth quarter.

But none of that mattered.

The Syrupmakers rolled up 364 yards of total offense, including 113 yards rushing on 14 carries from Solomon. Speed finished with 139 passing on 6 of 10.

"I was proud of these guys," Devoursney said. "The offense did well and our defense did what they always do. And I can't say enough about Noah Jones. But it was definitely one of those games where I was really proud of them."