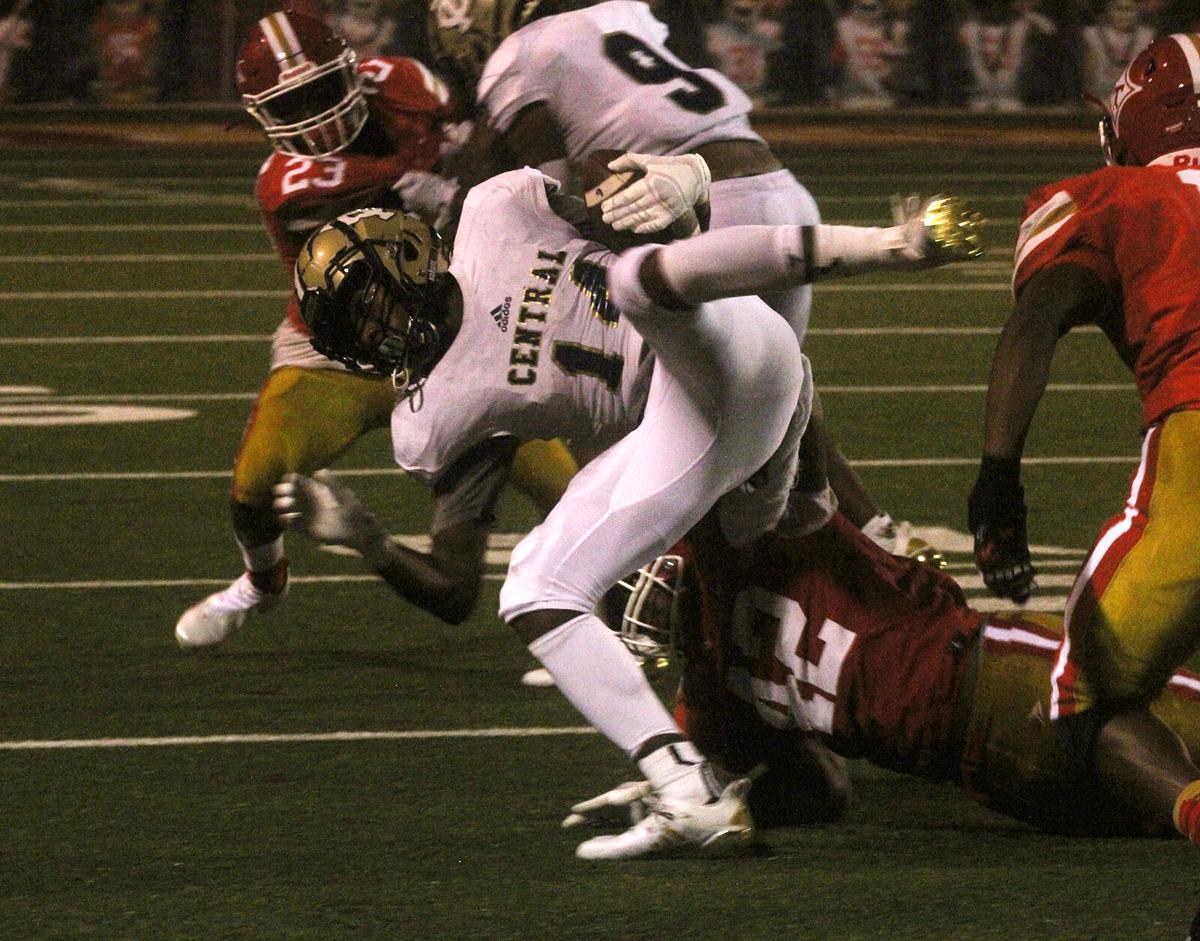 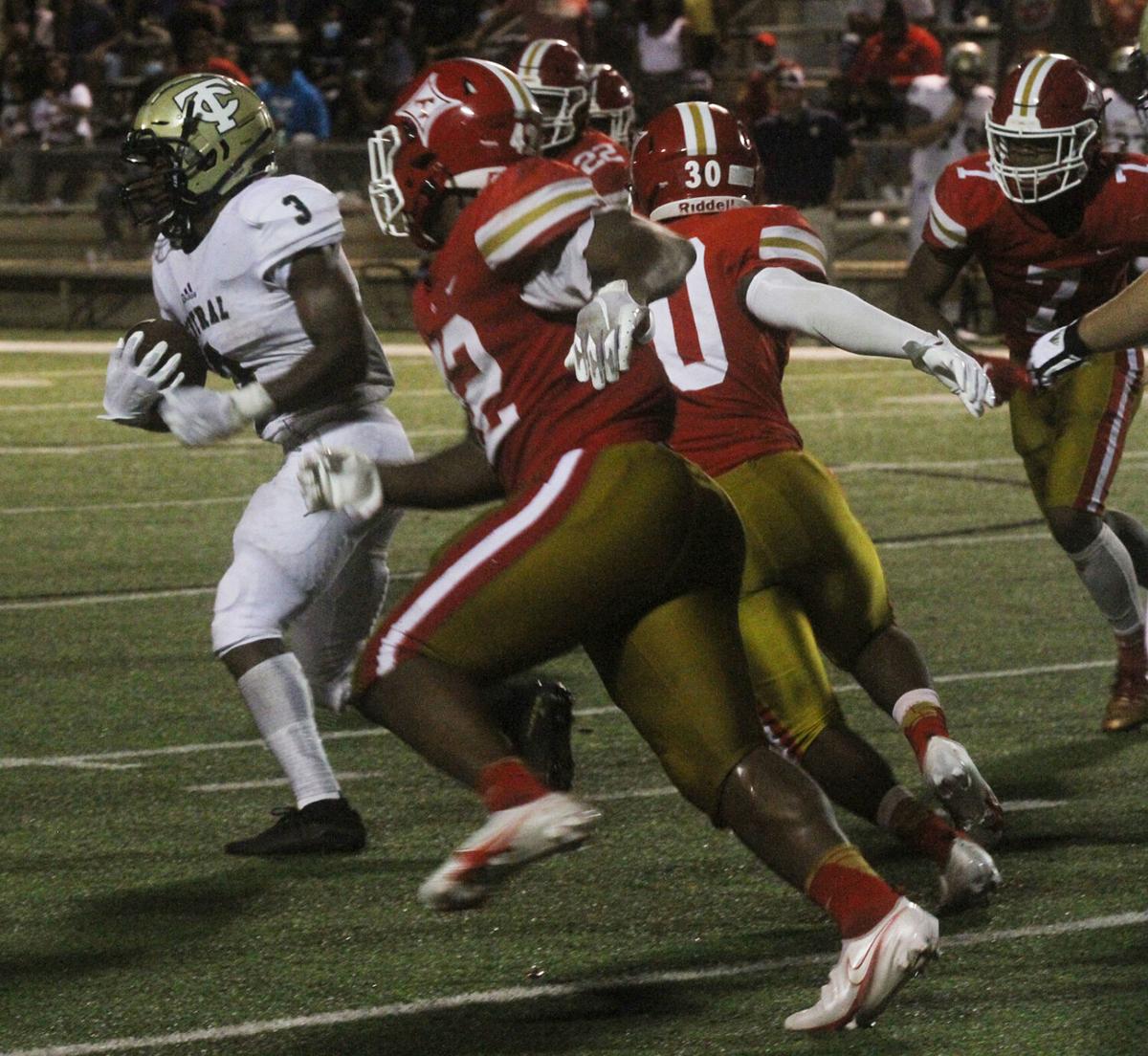 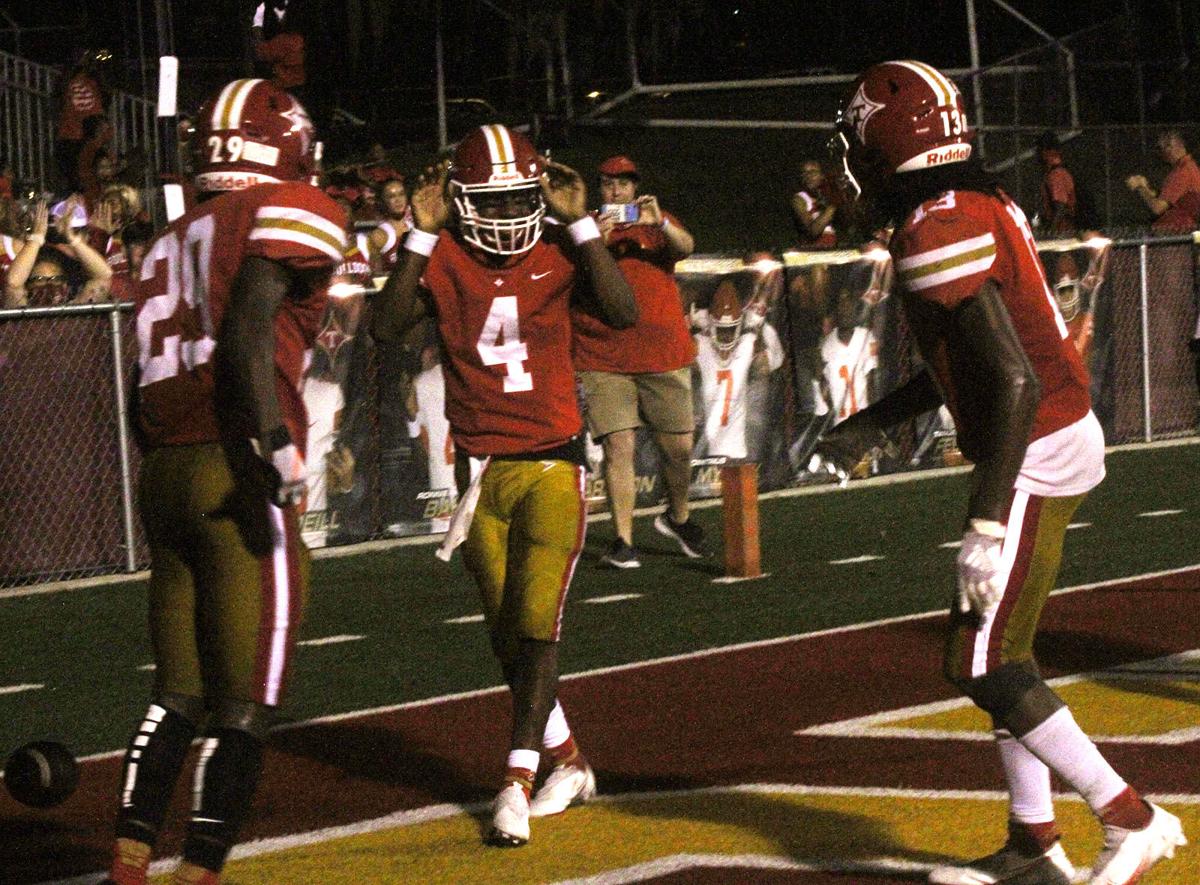 THOMASVILLE — A week after their ground game was stifled in the season opener, the Thomasville Bulldogs running attack put enough distance between them and their closest rival.

The Bulldogs ran for 131 yards in the second half, including going 97 yards on a back-breaking touchdown drive, knocking off their crosstown rival with a 34-7 win Friday night over the Thomas County Central Yellow Jackets before perhaps one of the smallest crowds to witness a Central-Thomasville game.

Ticket sales were limited and fans were asked to maintain social distancing because of COVID-19 protocols.

The Bulldogs were up 20-7 in the fourth quarter, having stopped the Yellow Jackets on downs, with 9:11 to play in the game. Ronnie Baker completed the 11-play drive, which drained 5:24 off the clock, with a 3-yard run.

Ricky Fulton ran five times for 18 yards on the march, and Malik Harper had 61 yards on five carries.

“We’d been trying to run the ball all game. We kept trying to run it,” an ebullient Bulldogs coach Zach Grage said. “We just have to have the (offensive line) go out and dominate, and they dominated that whole drive. Malik Harper started that thing, running like a man possessed, and Ricky Fulton finished it off.”

The win evened Thomasville’s record at 1-1. The loss was the season opener for the Yellow Jackets.

“We talked a lot about complacency, and that got us last week,” Grage said, noting last week’s 20-14 loss to Brooks County. “I’m not going to lie. We were humbled. It was a little pill of football humility and it was good for all of us.

“I think they did an unbelievable job of coming in and buying in and playing a really good football team,” Grage said of his Bulldogs. “I’m just so proud of the kids. For all the nay-sayers and stuff, it was tough. And tonight, the ’T,’ the program, kind of won out.”

Freshman Jay Randall added the capper, a 51-yard burst down the Thomasville sidelines with 1:31 to go.

The Yellow Jackets struck first. Dondell Green ended an impressive second drive, bolting 15 yards up the middle with 7:14 to go in the first quarter. Thomas County Central went 80 yards in 10 plays to take a 7-0 lead.

Thomasville answered on its ensuing drive. Baker found an open Mason Beckham to tie the game at 7-7.

The Bulldogs pounced on the ensuing pooch kick, setting up Austin Chastain’s 35-yard field goal for a 10-7 lead.

“It seems like the things that went against us last week went for us this week,” Grage said.

After Chastain connected on a 32-yarder in the third quarter fora  20-7 margin, the Jackets mounted another drive that got to the Bulldogs 3.

But on first and goal, senior quarterback Kalique Guyton lunged for the goal line near the pylon and took a severe hit. The ball trickled from his grasp and went into the end zone, where Thomasville recovered for a touchback with 2:50 remaining in the third quarter.

Guyton was helped off the field and did not return to action.

The elusive Persean Taylor took over at quarterback and drove the Jackets to the Bulldogs 7 before Thomasville stopped Central on downs.

The Yellow Jackets finished with 285 yards of total offense and ran 64 plays from scrimmage.

”They have good players, and Coach (Ashley) Henderson does a fantastic job,” he said.

In the 20-14 loss to Brooks County, the Bulldogs mustered a meager 31 yards on 30 attempts. Against Central, they racked up 229 yards.

The Bulldogs did not attempt a pass over the final 19:05 of the game.

“As far as football goes, you want to talk about guts and intestinal fortitude when someone knows you’re going to run the ball and you’re still able to do it, there ain’t nothing a whole lot better,” Grage said.

Central turned the ball over three times, throwing three interceptions, though one was on the first half’s final play and the other came on its final offensive snap of the game.

Central’s game with Tift County was called off because of COVID-19 cases within the Tift County program. Central instead will travel to play Wakulla (Fla.) on Friday.

Thomasville will travel to Cairo this Friday night in the battle for the Syrup Pitcher.