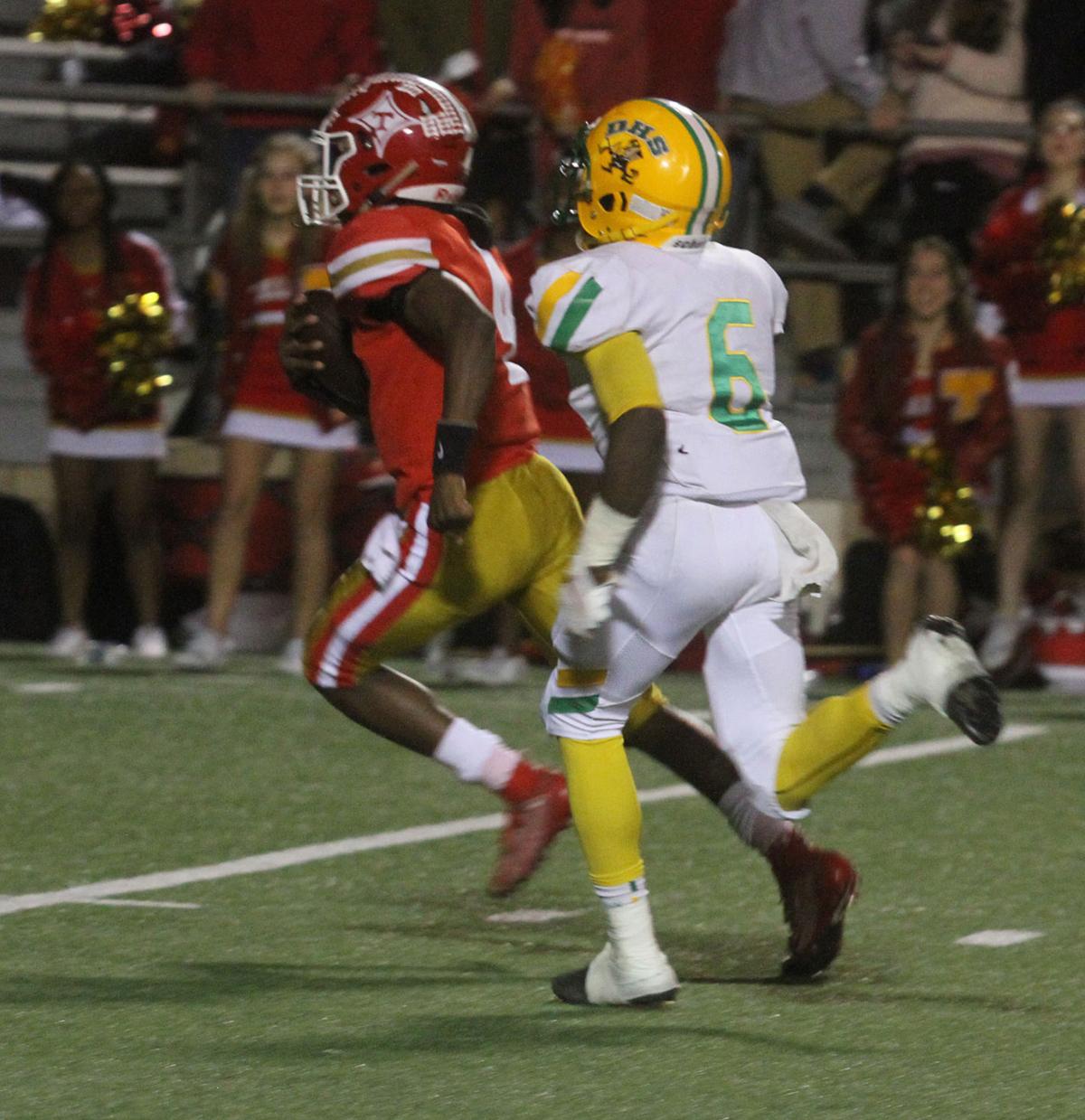 Thomasville High quarterback Ronnie Baker (4) takes off on a 29-yard scramble in the second quarter. 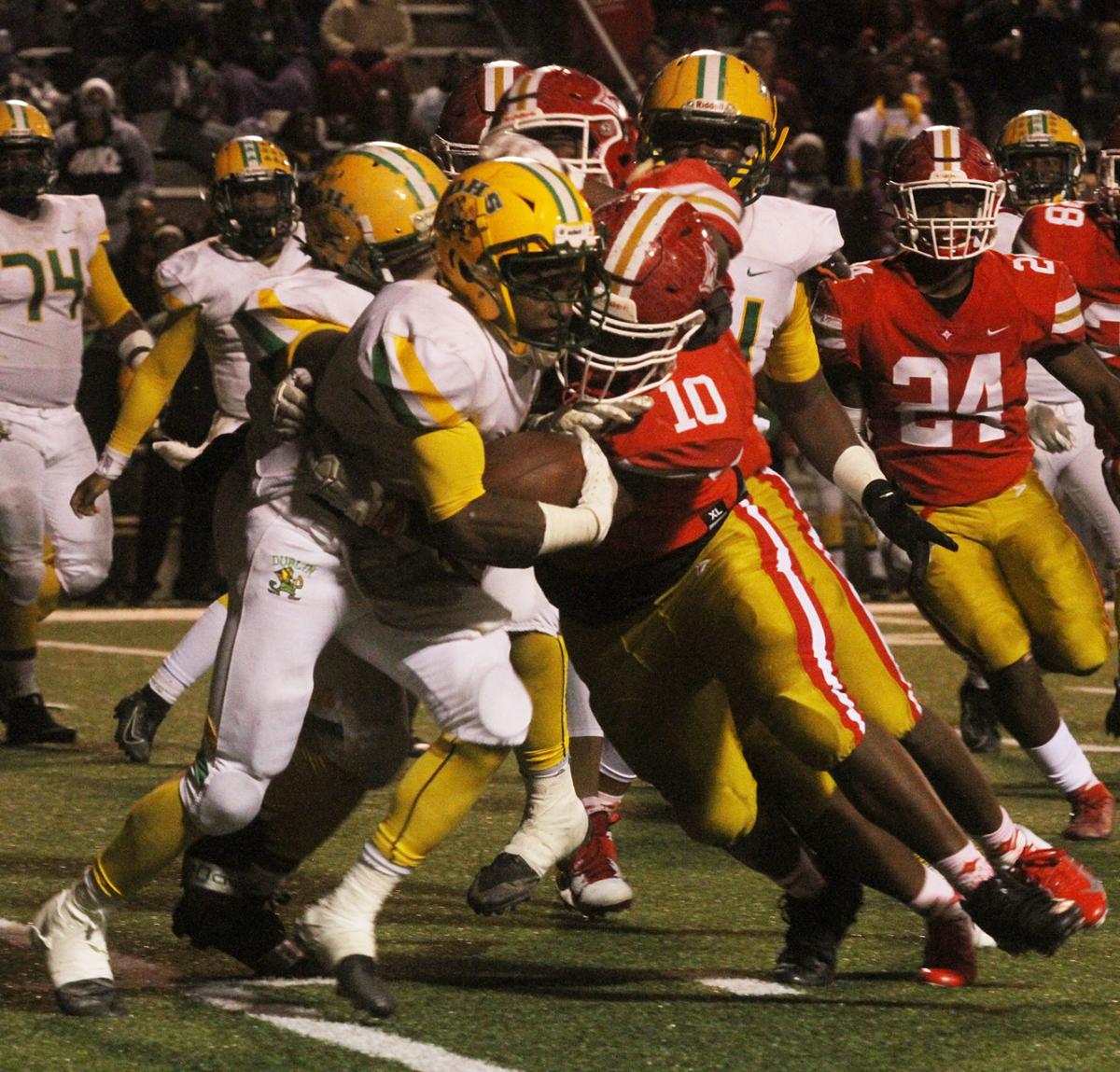 Thomasville's Trey Madison (10) stops Dublin running back Marcus Adams (6) for no gain in the fourth quarter. 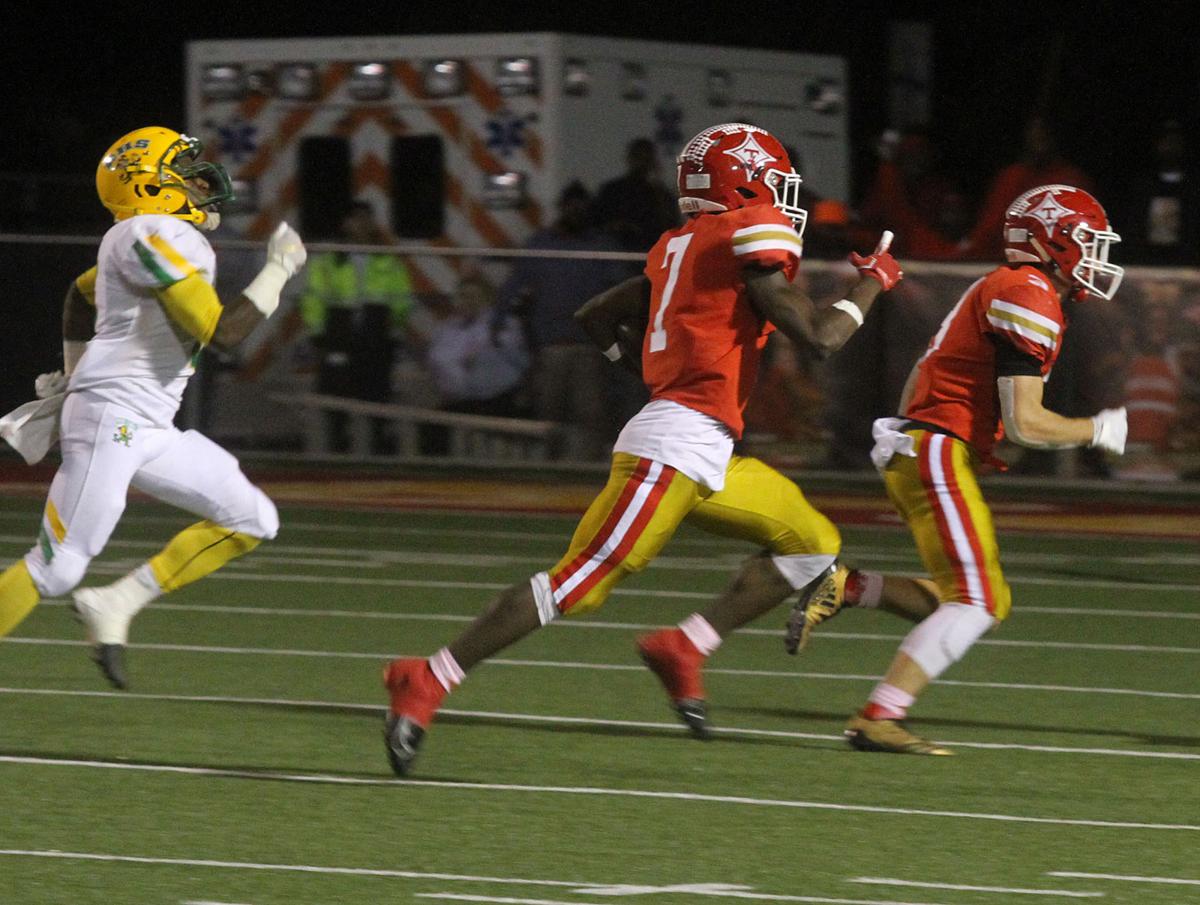 Kevin Cochran (7) looks for more running room on his 50-yard catch and run in the first quarter.

Thomasville High quarterback Ronnie Baker (4) takes off on a 29-yard scramble in the second quarter.

Thomasville's Trey Madison (10) stops Dublin running back Marcus Adams (6) for no gain in the fourth quarter.

Kevin Cochran (7) looks for more running room on his 50-yard catch and run in the first quarter.

THOMASVILLE — The Wing-T doesn’t need to take flight to be effective.

Behind a relentless rushing attack, and the nearly unstoppable Jaques Evans, the Irish held off the Thomasville Bulldogs in a wild 55-45 Class AA state semifinal game before a nearly capacity crowd at Veterans Memorial Stadium.

An emotional Zach Grage addressed his team following the loss, which ended their season at 9-5 and one step from playing for a state title.

“I wanted them to be more proud of the things they accomplished than for not where we didn't get to in that last game,” he said. “We fought to the bitter end. I’ve said it a lot, that high school football games are usually lost. I think this one was won.”

Hurston Waldrep's field goal on Thomasville’s first possession cut the lead to 7-3, but Evans, who ran for 190 yards in the first quarter alone and had 360 rushing yards at halftime, added touchdown runs of 13 and 49 to push Dublin’s lead to 21-3.

“That’s all we know,” Holmes said of his Wing-T offense, once all the rage in the state but which has now given way to more up-tempo offense. “I’ve been doing it since in 1976. I ain’t smart enough to do anything else.”

Thomasville needed just three plays, including Kevin Cochran’s weaving 50-yard catch and run, to set up Ronnie Baker’s 11-yard scoring pass to Payten Singletary. Evans, though, answered, bulling for 49 yards on the next play from scrimmage and capping that drive with a 1-yard plunge.

Baker connected with Singletary again, from 29 yards out, on another three-play scoring drive. Dublin turned to Evans again, and he delivered a 58-yard TD run. Romello Height, who has committed to Miami, pushed the lead to 41-17 with a 40-yard interception return.

Baker hit Cochran for a 3-yard score just before halftime, and opened the second half with a third scoring strike to Singletary.

Dublin took control again, with a 12-play drive that ate up 6:36 from the third quarter clock and ended on Zion Kemp’s 14-yard dash to make it 48-31. The Bulldogs could not get closer than 10 points the rest of the way.

The Irish committed 13 penalties but only three on offense. They also did not fumble the ball in 61 snaps on offense.

“They played about as perfect a game on the offensive side of the ball as you could ever hope to,” Grage said. “We had them tired, we had them on the ropes. But hats off to them and their preparation.”

Dublin did not attempt a pass in the game, yet the Irish compiled a whopping 586 yards on the ground. Evans did the bulk of the game, rushing for five touchdowns and 408 yards on 29 carries.

“They made us look bad a few times defensively,” Holmes said. "We weren’t able to get the pass rush we wanted. But the credit goes to them for that.”

“I’m so proud of this group as a whole and these seniors especially," he said. "I wish we could go one more week. Our fans were unbelievable.

“You love these kids and you love this group, everything they’ve been through," he added. "These seniors, they never gave up. They bought into the process. They brought this thing back to where it should be.”