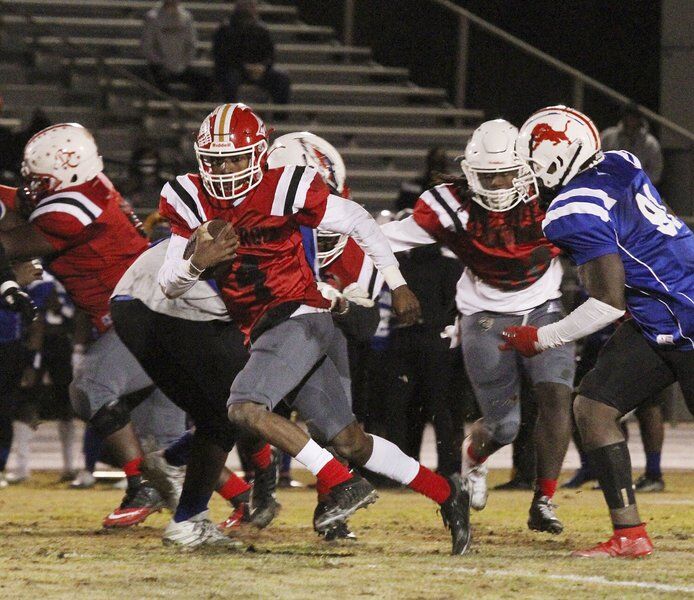 Pat Donahue/Times-EnterpriseThomasville's Ronnie Baker breaks free for a gain in the annual War of the Border. Baker was named the Team Georgia offensive MVP after the 14-13 win. 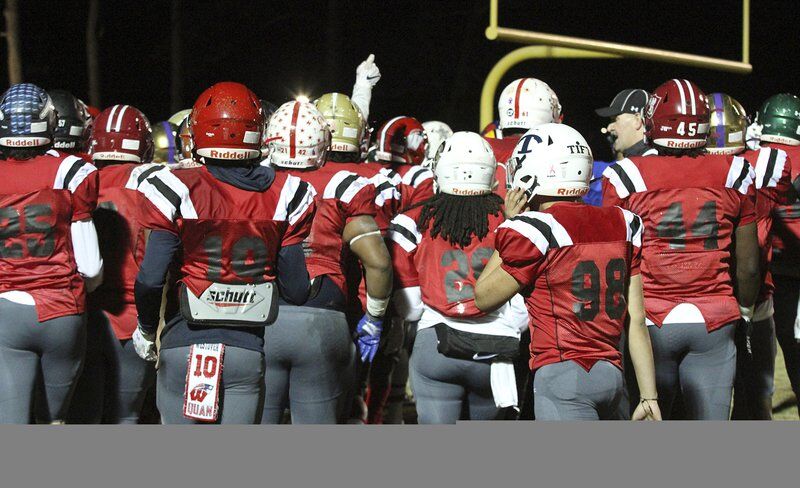 Team Georgia gathers in the end zone to celebrate its first touchdown in the War of the Border on Friday night. 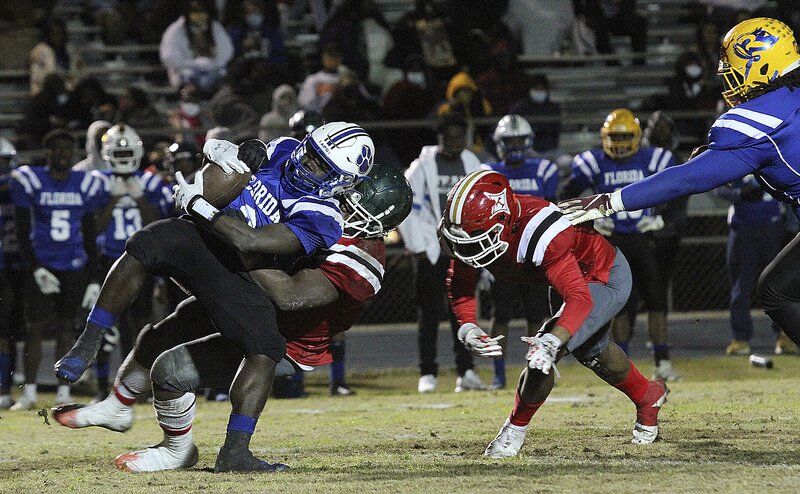 Pat Donahue/Times-EnterpriseThomasville's Ronnie Baker breaks free for a gain in the annual War of the Border. Baker was named the Team Georgia offensive MVP after the 14-13 win.

Team Georgia gathers in the end zone to celebrate its first touchdown in the War of the Border on Friday night.

THOMASVILLE — For the first time in five years, Team Georgia celebrated a War of the Border victory against the all-stars from Sunshine State.

And it was Team Florida’s celebration that may have tipped the balance.

Team Georgia held on for a tightly-contested and sometimes testy 14-13 win over Team Florida on Friday night at The Jackets’ Nest in the annual all-star game. The win snapped a Team Georgia four-game losing streak in the series.

“The boys just found a way to win,” said Thomas County Central head coach Ashley Henderson, who led Team Georgia. “They dug deep and got one more stop than they did. The 50-yard extra point was the difference in the ball game.”

Semai James of John Paul II made a diving catch in the end zone with 52.5 seconds left in the game to bring Team Florida within 14-13. But in his zeal upon scoring the touchdown, he flung the ball into the air. That led to an unsportsmanlike penalty call, and a subsequent such penalty pushed the point after try back to the 33-yard line.

David Monroe’s try was well short, and Team Georgia recovered the ensuing onside kick to close out the win.

Team Georgia took a 14-7 lead on the final play of the third quarter. Pelham’s Brantley Shiver, on a pump and go, hit a wide open Jaquan Graham from Westover for a 70-yard touchdown.

His Team Georgia teammates — at Henderson’s directive — swarmed him in the end zone, departing their spots along the sidelines.

“This bunch has been a lot of fun,” Henderson said of his Team Georgia roster. “The kids were having fun. That’s what I am asked to do, play hard and have fun. I’m proud of them and happy for them.”

Team Florida, with two Florida state flags waving, did likewise when Godby quarterback Lonnie Williams scored on a 2-yard run with 4:43 to go in the first half.

Along with Baker, Thomasville’s Dimitrius Myrick and Deldrick Smith were on Team Georgia, along with Thomas County Central’s D.J. Walden, Dekhariez Ivey and Issac Franklin and Nathan Yokley and Ethan Myers from Brookwood.

“It was a tight ball game and everybody got in and a lot of guys made plays,” Henderson said. "That’s what it’s really about. We were fortunate to come out on top. A shout out to the staff — those guys put in a lot of work and did a great job.”

Under Thomasville High’s Justin Montgomery as defensive coordinator, Team Georgia’s defenders forced five turnovers, and the “229 boys” as they called themselves turned one of them into their first score.

“Turnovers were big, too,” Henderson said. “Our defense played their butts off and gave us the ball, gave us a lot of opportunities. Our offense was opportunistic when they got it.”

For many of the players, Friday night’s all-star game may be the last they play. Some could find a college scholarship waiting, in a time when college players have been granted an extra year of eligibility and there is a period of free transfers for players, limiting the spots available.

As Henderson pointed out, they will get to boast about winning their all-star game forever to cap a season jumbled by the COVID-19 pandemic.

“It’s awesome,” Henderson said." The GHSA takes so much heat for what people view they do wrong,  but Dr. Hines and those guys stuck behind our coaches. They had a plan and every school executed it and these kids were able to have their senior seasons.

“Hopefully, they can move on and they’ve got those memories for the rest of their lives,” Henderson continued. “No matter where they play on Saturdays, if they do or don’t at the next level, there’s nothing like Friday night lights, whether it’s an all star game or a spring game. It’s all special.”