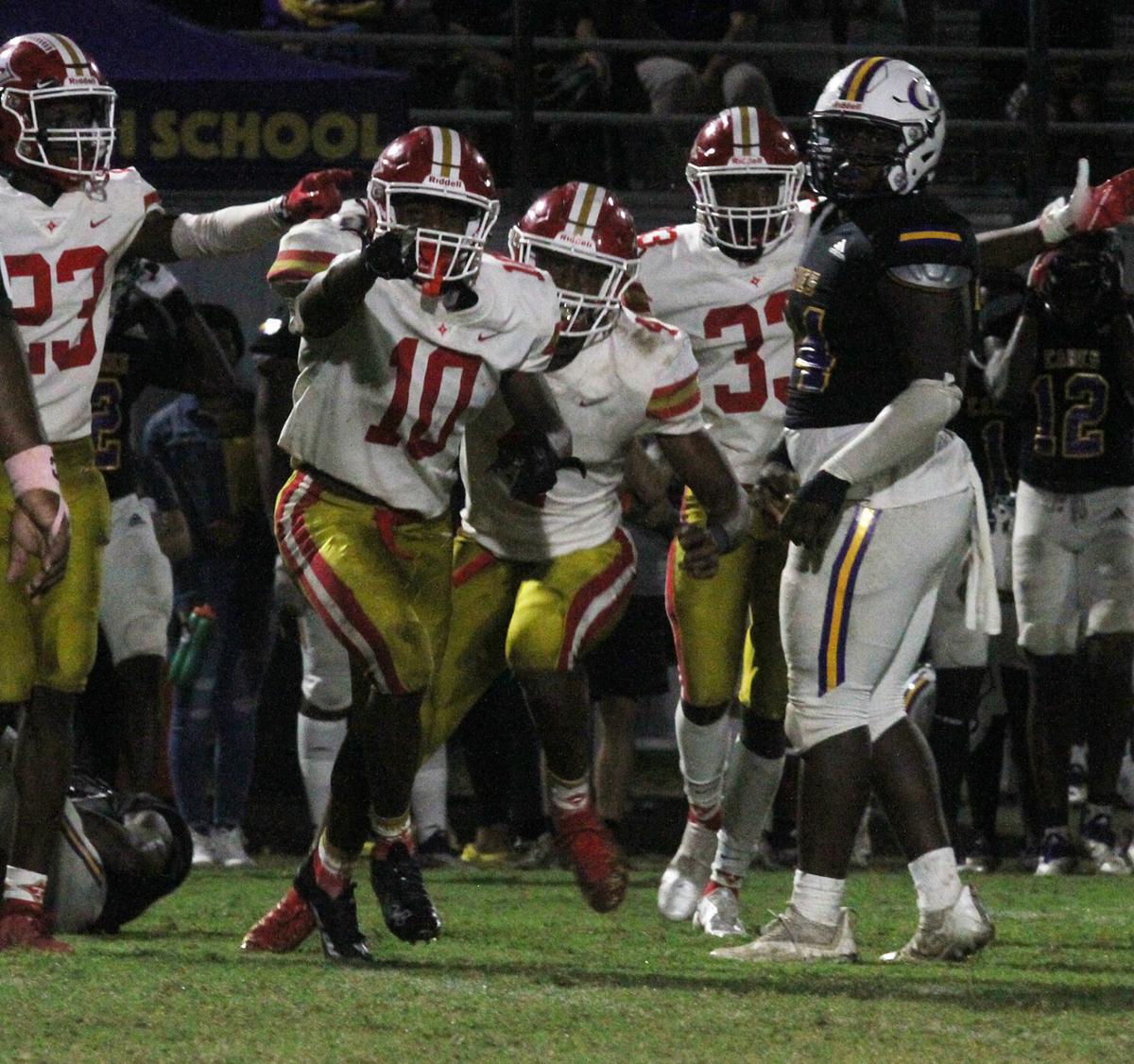 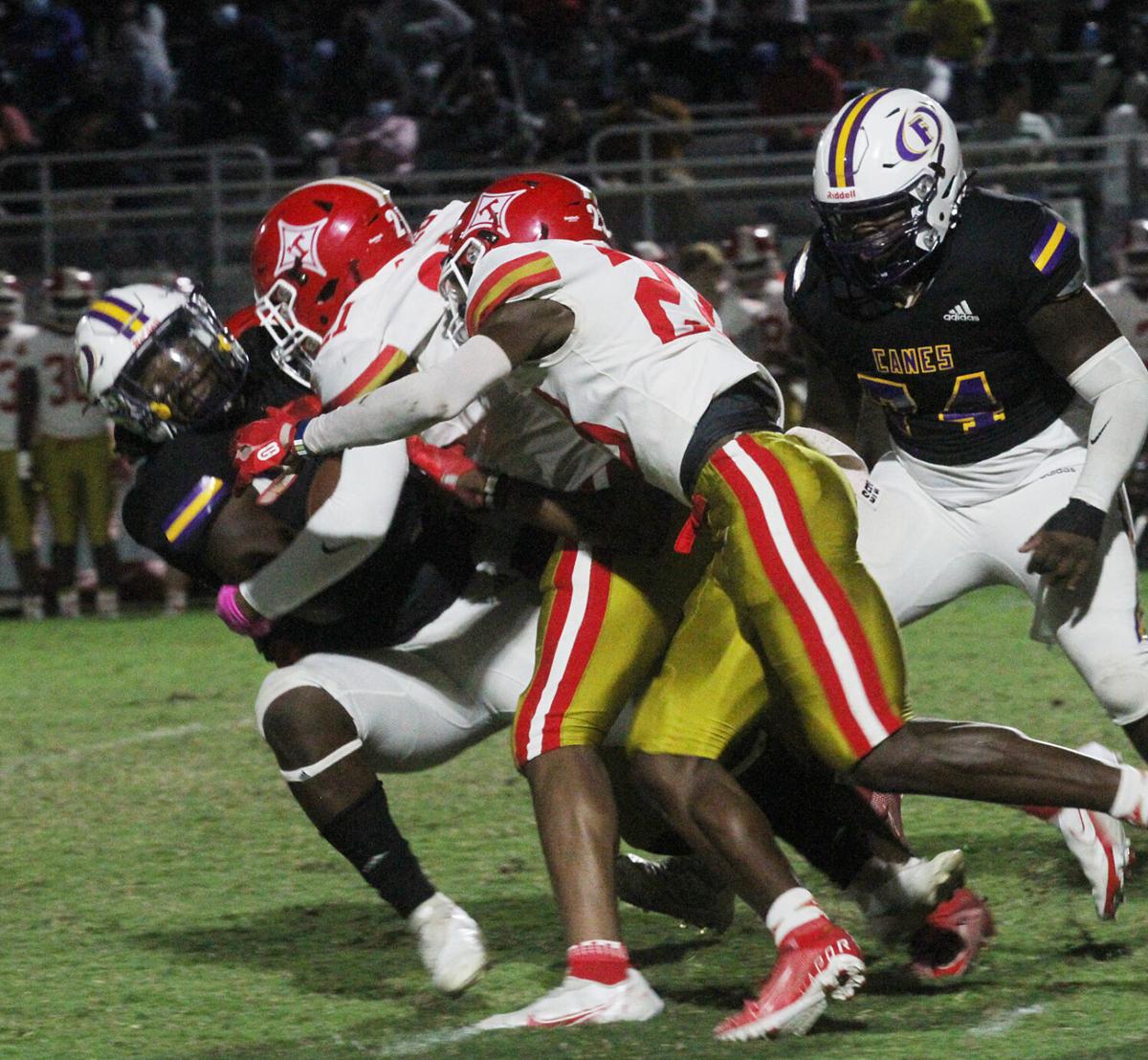 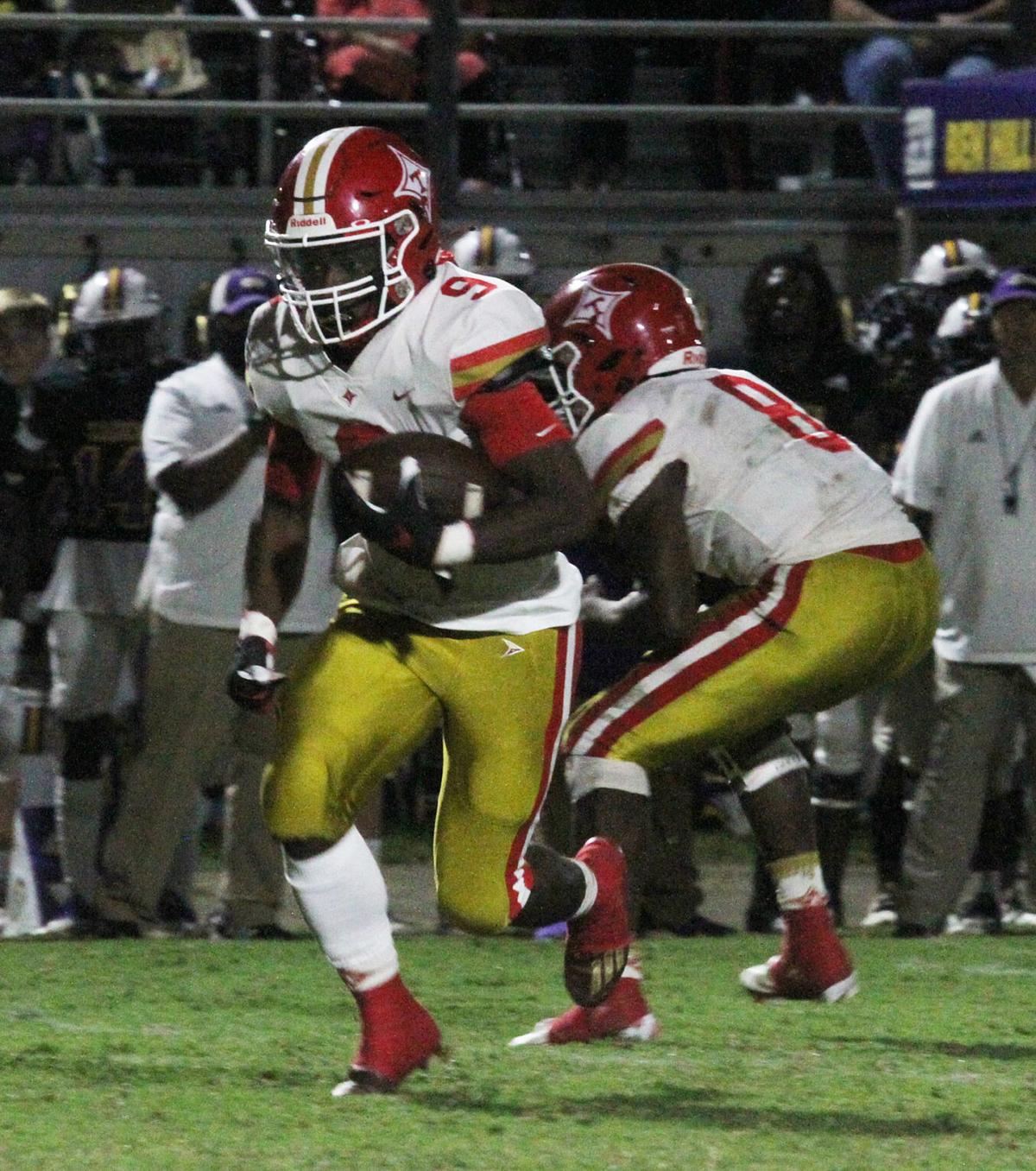 Ricky Fulton looks for room to run against Fitzgerald's defense in the first quarter of Thomasville's region championship win.

Ricky Fulton looks for room to run against Fitzgerald's defense in the first quarter of Thomasville's region championship win.

FITZGERALD — When the moment — and the game — came for the Thomasville Bulldogs, coach Zach Grage knew they were ready.

The No. 3-ranked Bulldogs held off No. 2-ranked Fitzgerald, with two late defensive stands, to claim the Region 1-AA title in a 15-8 win Friday night.

“We knew it was going to be a battle,” a happy Grage said. “You can’t say enough about our kids. I think our defense — holy cow — that’s big time.”

The Bulldogs held on fourth down at their own 10-yard line with less than 2 minutes to play. And when the Purple Hurricane got the ball back at the Bulldogs 45 with 1:28 remaining, the Bulldogs turned their pass rush loose.

They registered three consecutive sacks of Fitzgerald  junior quarterback Sultan Cooper to end the threat and essentially the game.

As for the stop at the 10-yard line, that’s actually by design for the Bulldogs. They practice just that scenario, the opposition at their 10-yard line, with one play.

Cooper found Sylon Davis for a 30-yard touchdown pass on Fitzgerald’s second possession. After a penalty on the point after try, the Purple Hurricane went for two and got it on Denorris Goodwin’s keeper.

“They’re extremely well-coached,” Grage said of the Purple Hurricane. “They’re a very talented team. They have a very good identity and they stuck with it.”

Getting down early to one of the state’s top Class AA teams on the road didn’t rattle the Bulldogs.

After an interception ended a Thomasville drive at the Fitzgerald 20, the Bulldogs finally got going midway through the second quarter. Malik Harper’s 2-yard run with 2:20 to go in the first half helped cut the lead to 8-7.

Set up by Cole Shaw’s recovery of a muffed punt, Demorrio Thurman turned Shannen White’s hitch pass into a 13-yard score with 5:03 to go in the third quarter. Harper converted the two-point run for the 15-7 lead.

From there, the defense held on.

Each of Fitzgerald’s final four possessions either reached or started in Thomasville territory. But none resulted in any points.

The Bulldogs, after holding the Purple Hurricane at their own 10, tried to run out the remaining 1:53. Fitzgerald, though, held firm.

“This is actually the first time we’ve gotten to the four-minute drill on offense and haven’t been able to run out the clock,” Grage said.

Penalties were an issue, particularly early, for the Bulldogs. A block in the back call cut short White’s pass to Thurman just before the interception, and another penalty wiped out a 35-yard screen pass to Ricky Fulton just before half-time. Grage said he doesn’t mind if mistakes a result of a player giving effort.

“It’s a lot more fun to watch tape after a region championship,” he said.

Fitzgerald fell to 7-2 on the season and 3-1 in the region. Thomasville, now 8-1 overall and 4-0 in the region, faces Berrien at home next week in its regular season finale.

While the win also sets up the Bulldogs for at least one home playoff game, Grage pointed out just how well his team has played on the road this season.

“I’m so proud for our community,” Grage said. “I’m proud of our kids. You look at our schedule. We had to go to Cook, we had to go to Fitzgerald and to Early — the three worst trips you can have.